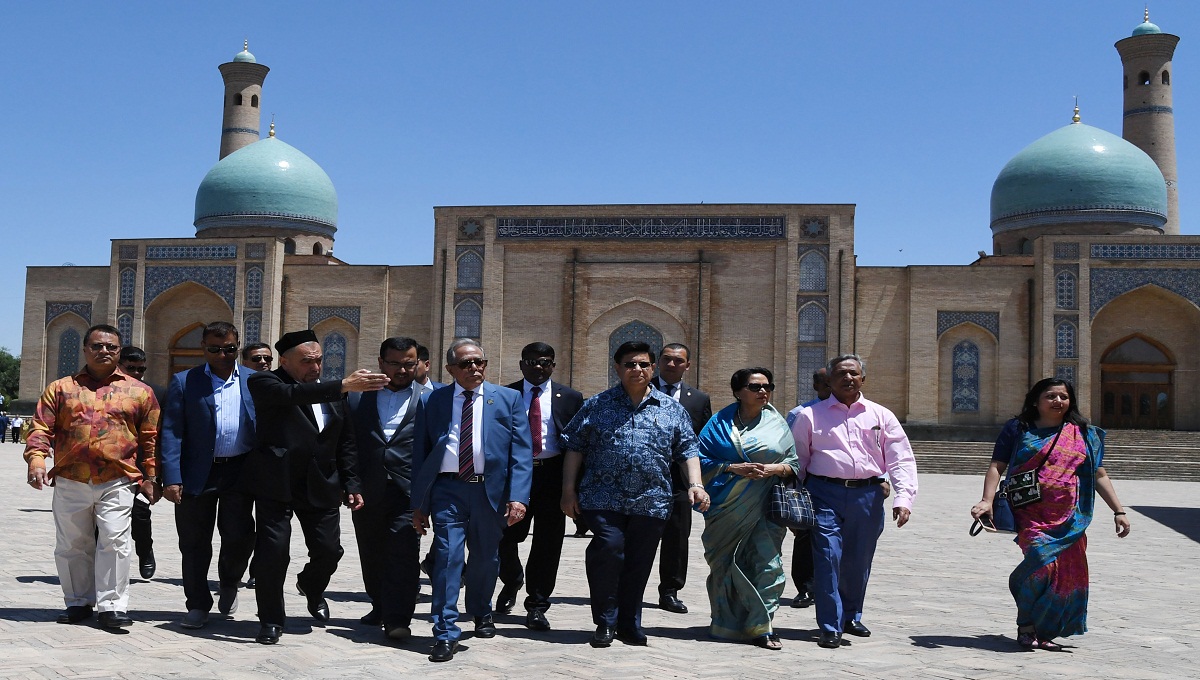 He visited the two historical places as part of the Tashkent city tour.

Family members of the President, Foreign Minister Dr AK Abdul Momen along with his wife and secretaries to the President accompanied him during the visit.

Deputy Prime Minister of Uzbekistan Abdul Hakimov received the President at the mosque where he stayed for some time.

He also visited a factory, UZTEX, in the afternoon at the Sergeli district of Tashkent.

The textile company which started their production in 2010 mainly exports their products to Russia, China, Iran, Turkey, Korea, Poland and Italy.

“Men and women are working in a very suitable atmosphere. I’m very impressed with the scene,” the President said during the visit.

He also said Bangladeshi conglomerate Beximco will visit the factory very soon. “I will arrange everything to send other business groups. You (Uzbekistan businessmen) should also visit Bangladesh’s garment factories.”

Stressing on exchanging visits by business groups from both the countries, Abdul Hamid said these will strengthen the trade and commerce relations between the two countries.

He also said this visit will help improve the garment sectors of Bangladesh and Uzbekistan.

On June 16, the President arrived here after visiting Bukhara city of Uzbekistan leaving Tajikistan after a three-day tour on a special flight of Uzbekistan Air Force.

Abdul Hamid visited the mausoleum of Hazrat Nakshbandi, Emir of Bukhara’s Summer Palace, and Arc of the city during the Bukhara city tour.

He arrived in the capital city of Tashkent from Bukhara by air at 10pm.

The President is scheduled to visit Samarkand by bullet train “Afrosiyob” on Tuesday morning.

The President is scheduled to return home on June 19.