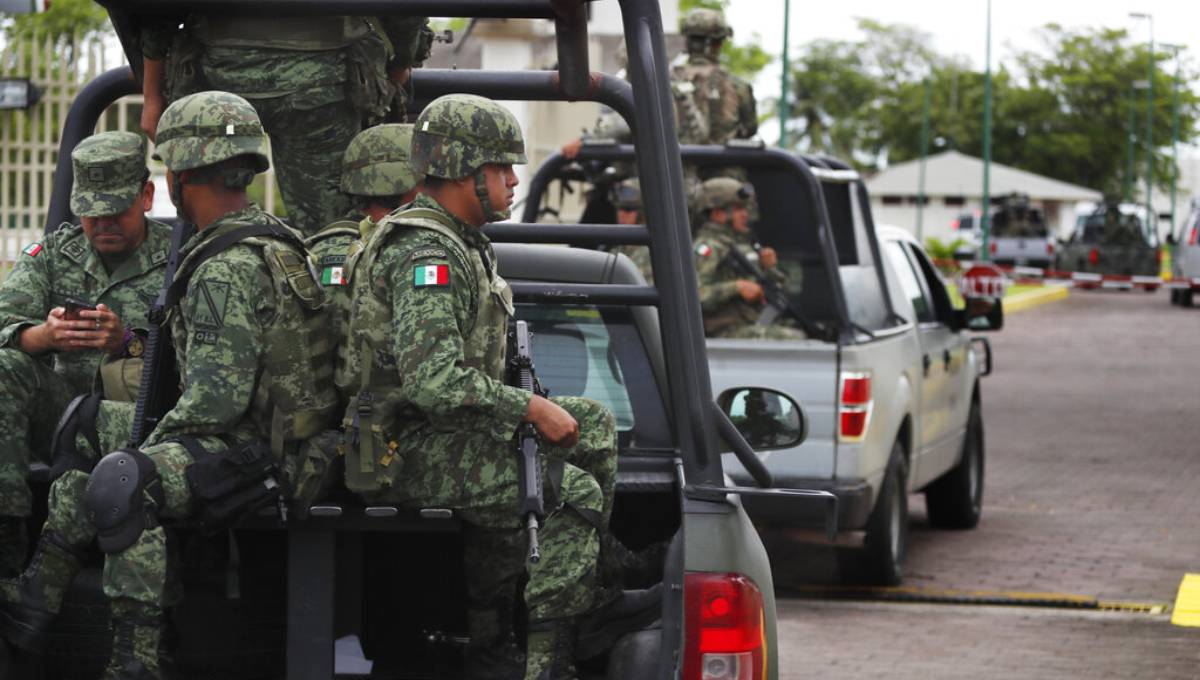 Photo: Mexican soldiers ride in the back of a pick up truck as they escort the caravan carrying Mexico’s Minister of Defense, in Tapachula, Mexico, Tuesday, June 11, 2019.

Tapachula, Jun 12 : Mexican officials said Tuesday they are beginning deployment of the country’s new National Guard for immigration enforcement, an accelerated commitment of a 6,000-strong force made as part of an agreement with the United States to head off threatened U.S. tariffs on imports from Mexico.

President Andrés Manuel López Obrador and Foreign Relations Secretary Marcelo Ebrard also announced that a team of five officials, including a general and a prison director, has been formed to implement the immigration plan.

Ebrard said that Gen. Vicente Antonio Hernández Sánchez, commander of the Tapachula military zone near the border with Guatemala, will begin a tour of the south “to speed up the deployment in the area.”

The main objective is to register migrants, offer them options for regularizing their immigration status and return those who don’t want to register, he added.

The Associated Press has not yet seen any National Guard deployment in Tapachula, where soldiers and federal police have been working to support immigration agents. At the Suchiate River that forms the border between the two countries, the usual drip-drip of irregular crossings by small groups on rudimentary rafts continued.

Also Tuesday, Interior Secretary Olga Sánchez Cordero said the National Guard will not resemble the U.S. Border Patrol in the sense that it will work to regularize immigration flows, not stop it, and be deployed throughout the country.

Ebrard did not mention detentions, which have risen notably in recent months, but said there is a need to expand and improve overcrowded immigration facilities that operate as de facto detention centers.

He said later Tuesday at a news conference that the deployment would be “along the entire frontier.”

Another deployment is going to the border with the United States to attend to migrants who have been returned to Mexico while their asylum claims are processed in U.S. courts.

As part of the deal reached last Friday with Washington, Mexico agreed to an expansion of the program known as Migrant Protection Protocol, though the United States has run into its own logistical obstacles to ramping it up.

Ebrard said it would be expanded from the current three border points to three more that will be decided in talks with the U.S. officials this week.

There have been more than 11,000 returns by migrants to Mexico under MPP since it launched in January, according to the most recent figures from the Mexican government.

Mexico’s National Guard is a newly formed force tasked with policing rising insecurity. It is separate from the military and is legally supposed to be under civilian command, though it is largely made up of current or former soldiers and federal police.

The Guard was created for reasons of national security, Sánchez Cordero said, and “the entry of irregular migrants is part of our national security. For that reason we want an orderly and safe migration.”

“We also have the right for our laws to be respected,” she said, “and to take care of our border.