Bangladesh through to World Cup qualifiers after goalless draw against Laos 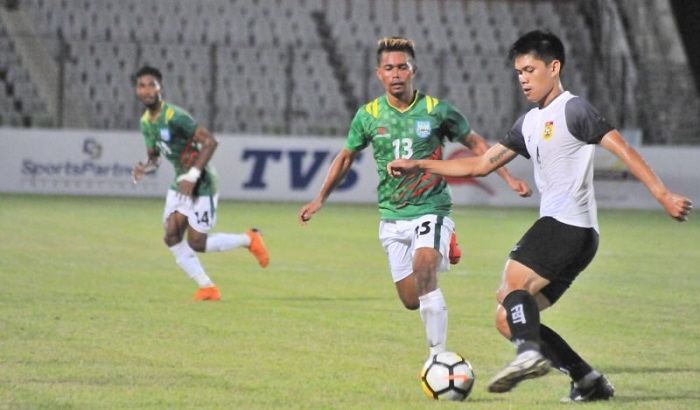 Bangladesh have to remain satisfied with a goalless draw against Laos in the second leg of their first round qualifiers for the 2022 World Cup.
With the goalless draw, Bangladesh national team have made it into the main qualifying round of the FIFA World Cup 2022 and AFC Asian Cup 2023 main qualifying round after securing a 1-0 aggregate victory over Laos in the pre-qualifiers.

Bangladesh played out a goalless draw with Laos in the second leg at home which meant that Rabiul’s only away goal was enough to send the Red and Greens through.Spurred on by a huge crowd at the Bangabandhu National Stadium on Tuesday evening, Jamal and the boys played some brilliant football against Laos.

However, lack of clinical finishing and some desperate defending kept the Bangladesh attackers at bay.

Laos, on the other hand, had to play second fiddle in front of an energized Bangladesh side.

Nevertheless, the teams left the field at stalemate but Bangladesh went through to the main qualifying round thanks to Rabiul’s 72nd minute goal in the first leg at Vientiane.

The result is a welcome news for all the football fans in Bangladesh as it means that they would be able watch the national team in action in the upcoming years more regularly including the main qualifying round of FIFA World Cup 2022 and AFC Asian Cup 2023.