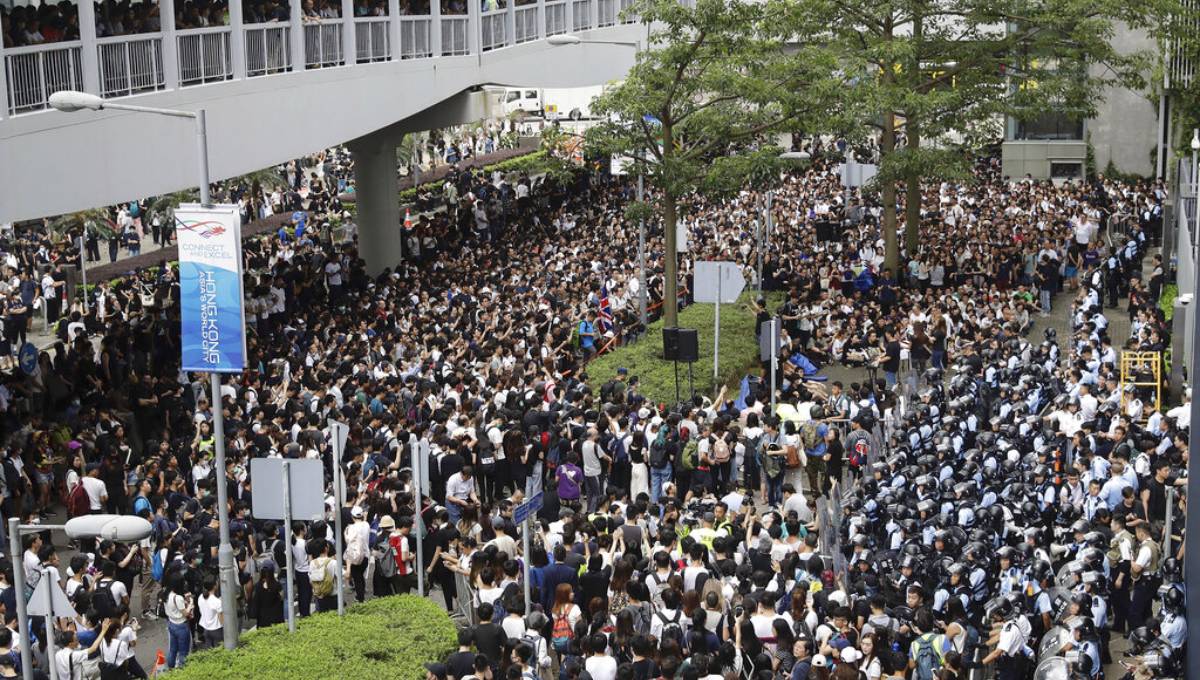 Photo: Protesters gather in front of policemen in anti-riot gear outside the Legislative Council in Hong Kong, Wednesday, June 12, 2019.

Hong Kong, Jun 12 : Hundreds of protesters surrounded government headquarters in Hong Kong on Wednesday as the administration prepared to open debate on a highly controversial extradition law that would allow accused people to be sent to China for trial.

The overwhelmingly young crowd of demonstrators overturned barriers and tussled with police as they sought to enter government headquarters and offices of the Legislative Council.

Under its “one country, two systems” framework, Hong Kong was guaranteed the right to retain its own social, legal and political systems for 50 years following its handover from British rule in 1997. However, China’s ruling Communist Party has been seen as increasingly reneging on that agreement by forcing through unpopular legal changes.

The government pushed ahead with plans to present the amendments to the legislature on Wednesday despite a weekend protest by hundreds of thousands of people that was the territory’s largest political demonstration in more than a decade. A crowd began gathering outside the Legislative Council on Tuesday night, and U.S. Consulate is warning people to avoid the area, exercise caution and keep a low profile. Some businesses decided to close for the day, and while labor strikes and class boycotts have also been called, it wasn’t immediately clear if those were widely heeded.

The legislation has become a lightning rod for concerns about Beijing’s increasing control over the semi-autonomous territory.

“We’re young but we know that if we don’t stand up for our rights, we might lose them,” said an 18-year-old protester who gave only her first name, Jacky, to avoid possible retaliation from authorities.

Police called in reinforcements and closed off access to the area around the Legislative Council and government headquarters, patrolling in the heat and humidity but without any immediate conflict with protesters.

Hong Kong Chief Executive Carrie Lam has consistently defended the legislation as necessary to close legal loopholes with other countries and territories. The legislature’s president, Andrew Leung, has scheduled a vote on June 20.

Sunday’s protest was widely seen as reflecting growing apprehension about relations with the Communist Party-ruled mainland, whose leader, Xi Jinping, has said he has zero tolerance for those demanding greater self-rule for Hong Kong.

Critics believe the extradition legislation would put Hong Kong residents at risk of being entrapped in China’s judicial system, in which opponents of Communist Party rule have been charged with economic crimes or ill-defined national security offenses, and would not be guaranteed free trials.

Lam, who canceled her regular question and answer session on Wednesday, said the government has considered concerns from the private sector and altered the bill to improve human rights safeguards. She said without the changes, Hong Kong would risk becoming a haven for fugitives.

She emphasized that extradition cases would be decided by Hong Kong courts.

Ronny Tong Ka-wah, a lawyer and member of Lam’s administration advisory committee, said Sunday’s protest showed a lack of trust in Hong Kong’s administration, partly because Lam was selected by a small number of electors rather than by popular vote. However, China’s patience with Hong Kong’s demands has its limits, Tong said.

“We need to gain the trust and confidence of Beijing so they can allow us the freedom of political reform,” Tong said. “They don’t want to see Hong Kong as a base of subversion. And I’m sorry, we’re doing exactly that.”

Opponents of the proposed extradition amendments say the changes would significantly compromise Hong Kong’s legal independence, long viewed as one of the crucial differences between the territory and mainland China.

“The government is asking these people with decades of mistrust suddenly to trust the system and to accept assurances that the (Chinese) mainland will offer that they be honored. And that’s clearly not persuading the people,” Dykes said in an interview.

Hong Kong currently limits extraditions to jurisdictions with which it has existing agreements and to others on an individual basis. China has been excluded from those agreements because of concerns over its judicial independence and human rights record.

Supporters have pointed to the case of Chan Tong-kai, a Hong Kong man who admitted to Hong Kong police that he killed his girlfriend during a trip to Taiwan. Because Hong Kong and Taiwan don’t have an extradition agreement, he has not been sent to Taiwan to face charges there, though he has been jailed in Hong Kong on money laundering charges.

Under its “one country, two systems” framework, Hong Kong maintains its own social, legal and political systems and residents enjoy far greater freedoms than people on the mainland, such as the freedom to protest or publicly criticize the government.

The mainland’s ruling Communist Party exerts influence on the Hong Kong government. Lam was elected in 2017 by a committee dominated by pro-Beijing elites and was widely seen as the Communist Party’s favored candidate.

The Legislative Council includes a sizable camp of pro-Beijing lawmakers.

Beijing has made substantial efforts in recent years to integrate Hong Kong with the mainland. Last October, China opened the world’s longest sea-crossing bridge, connecting Hong Kong and Macau to the city of Zhuhai in southern Guangdong province.

Those in Hong Kong who anger China’s central government have come under greater pressure since Chinese President Xi Jinping came to power in 2012.

The detention of several Hong Kong booksellers in late 2015 intensified worries about the erosion of Hong Kong’s rule of law. The booksellers vanished before resurfacing in police custody in mainland China. Among them, Swedish citizen Gui Minhai is currently being investigated on charges of leaking state secrets after he sold gossipy books about Chinese leaders.

In April, nine leaders of a 2014 pro-democracy protest movement known as the “Umbrella Revolution” were convicted on public nuisance and other charges.

In May, Germany confirmed it had granted asylum to two people from Hong Kong who, according to media reports, were activists fleeing tightening restrictions at home. It was the first known case in recent years of a Western government accepting political refugees from Hong Kong.