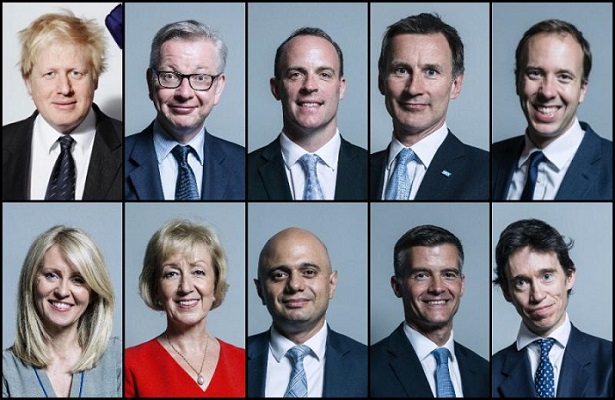 London, June 11 : The final candidates for the Tory leadership race have been confirmed, with 10 running to become the next PM.
Jeremy Hunt, Dominic Raab, Matt Hancock and Michael Gove – who launched their campaigns ahead of the nomination deadline – are on the final list.

Conservative MPs will now take part in a series of votes to whittle the candidates down to the final two.The two MPs will then face the wider Tory membership to decide on the next leader of their party, and the country.

To be allowed to run, the MPs needed to have a proposer, a seconder and the support of six other members.

Sam Gyimah, the only contender backing another referendum on Brexit, withdrew from the race shortly after nominations closed, saying there was not enough time to build support.

Theresa May officially stepped down as the leader of the Conservative Party last week, but will remain as prime minister until her successor is chosen.A raft of candidates with different appeal

What are Tory MPs looking for in their next leader?

Someone who can win a general election and protect their seats, certainly. Someone who has a plausible plan for Brexit. Someone to breathe life into a glum and dejected party.

If parliamentary sparkle was the main qualification Michael Gove would probably romp this race – but after destroying the candidacy of Boris Johnson last time and recent revelations about his use of cocaine, his reputation has been harmed.

Johnson is divisive among colleagues and his personal life has long been messy, but he remains one of the most recognisable and charismatic politicians in the country.

Jeremy Hunt has a focused, managerial manner, Dominic Raab has the intensity of a karate-chopping former lawyer and Sajid Javid has climbed to the top of the Tory party.

Esther McVey built a career in television that led to politics, Andrea Leadsom is making a second tilt at No 10, and Rory Stewart’s social media campaign has brought him attention and plaudits from outside Conservative circles.

But in this contest, it’s the judgement of Conservative MPs and party members that matters.

Environment Secretary Gove, who has faced calls to drop out of the race after he admitted using cocaine several times more than 20 years ago, repeated at his campaign launch that he regrets “his past mistakes”.

His speech focused on the policies he would introduce as leader, including the creation of a “national cyber crime task force” and more protection for the armed forces from legal challenges.

He said he wants to “ensure that our NHS is fully-funded, properly funded” and that funding is protected under law.

In a swipe at Boris Johnson’s earlier tax policy pledge to cut income tax bills for people earning more than £50,000 a year, he said: “One thing I will never do as PM is use our tax and benefits system to give the already wealthy another tax cut.”

Johnson has so far not conducted any broadcast interviews about his campaign.

On Brexit, Gove said it was “not enough to believe in Brexit you’ve also got to be able to deliver it”, insisting he has “a proper plan”.

Earlier, Health Secretary Matt Hancock told his launch the Conservatives and the country “need a fresh start”, announcing one of his key pledges – to increase the national living wage to more than £10 an hour.

He has also won a high-profile backer, with the de facto deputy prime minister, David Lidington, pledging his support.

Ex-Brexit Secretary Dominic Raab said he was “a committed Brexiteer” who could be trusted to secure the UK’s departure. He also unveiled plans to redirect £500m a year from the aid budget to create an international wildlife fund.

He also attempted to end criticism of his stance on abortion by insisting he would not try to change the law if chosen as PM.

Former Work and Pensions Secretary Esther McVey outlined her campaign at a think tank event, saying “we have nothing to fear” from a no-deal Brexit, and pledging to give a pay rise to public sector workers.

He called for compromise over Brexit, and said he would give Parliament “a final chance” to vote through the existing deal that Mrs May negotiated with the EU.

But he ruled out supporting a further referendum, arguing “it wouldn’t resolve anything”.

Whereas candidates in the past would have only needed two MPs supporting them, senior Tories decided to change the rules earlier this month in an effort to speed up the contest.

All 313 Conservative MPs will vote for their preferred candidate in a series of ballots held on 13, 18, 19 and 20 June to whittle down the contenders one by one until only two are left.

Due to another rule change, candidates will need to win the votes of at least 16 other MPs in the first ballot and 32 colleagues in the second to proceed.

The final two will be put to the 160,000 or so members of the wider Conservative Party in a vote from 22 June, with the winner expected to be announced about four weeks later.

On Tuesday 18 June BBC One will be hosting a live election debate between the Conservative MPs who are still in the race.

If you would like to ask the candidates a question live on air, use the form below. It should be open to all of them, not a specific politician.