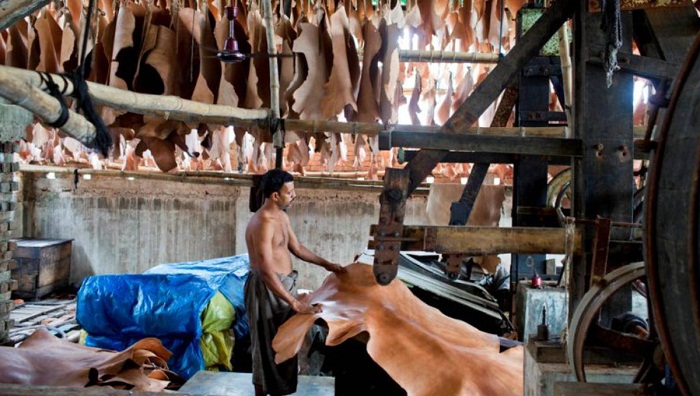 Dhaka, Jun 10 : The export of leather products is showing a downward trend as many tanners could not yet turn their business around after the relocation of tanneries from the capital’s Hazaribagh area to a leather industrial estate in Savar.
The export volume declined by 9.08 percent in the first nine months of the current fiscal year compared to that of the same period in the previous fiscal year.The export amount of leather sector — leather, leather products and leather footwear — is US$ 771.69 million during the July-March period of 2018-19 fiscal year, which was US$ 848.79 million during the same period of 2017-18 fiscal year, according to statistics provided by the Bangladesh Export Promotion Bureau (EPB).

According to insiders, the leather sector actually started witnessing a negative export growth from the 2017-18 fiscal year after the relocation of tanneries to Savar industrial estate.

The government in April, 2017 stopped the rawhide supply completely to Hazaribagh area forcing over 200 tanneries to shift to Savar Leather Industrial Estate.

Despite the negative export growth in leather and leather products, the leather footwear continues its uptrend in export.exported leather footwear worth of US$ 458.76 million in the first nine months of the current fiscal year (July-March 2018-19), which is 7.86 percent higher than US$ 425.76 million during the same period of 2017-18 fiscal year.

The export of leather products, except footwear, marked a 37.37 percent negative growth in the nine months of the current fiscal year compared to that during the same period of the previous fiscal year.

Shakhawat Ullah, general secretary of Bangladesh Tanners Association (BTA) said, “The export earnings from the leather sector have sharply declined as many tanneries failed to make turnaround after their relocation to Savar.”

He said many international buyers, who switched over to other markets from Bangladesh during the relocation process of tanneries did not come back.

“The export earnings from the leather sector have got a negative growth as we could neither retain regular buyers nor create new markets,” said the BTA general secretary.

About the positive growth in export of leather footwear, he said the footwear industry can import leather from foreign countries alongside collecting that from domestic sources.

He, however, said some 120, out of 154 tanneries, remain in production in the Savar Tannery Estate.

Shakhawat said the installation of Central Effluent Treatment Plant (CETP) is yet to be completed. “Out of four modules of the CETP, three modules work partially. Besides, the dumping yard for the industrial waste was not constructed,” he said.

Since the CETP installation remains incomplete, the factories do not get certificates from the Leather Working Group, which is also a reason behind the fall in the leather export, he said adding that international buyers are now aware and they buy products examining the LWG certificate.

Mazakat Harun, owner of Aaron Leather Complex, said the relocation of tanneries has an adverse impact on the export of leather products.

“The tanneries have become weak investing huge money in construction of structures and installment of factories at the Savar Tannery Estate,” he said adding that the tanneries hardly get proper support from banks.