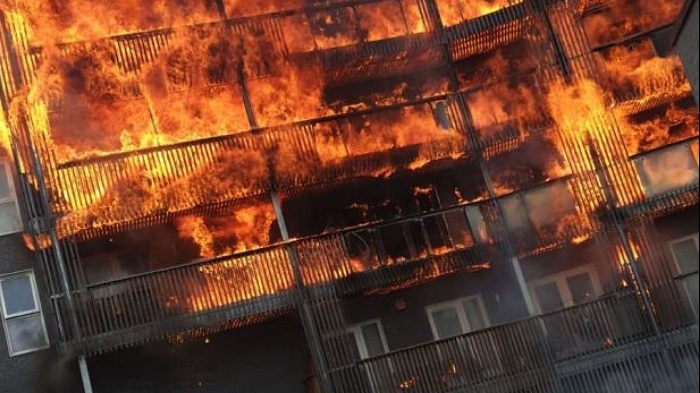 London, Jun 10 : A fire has engulfed a block of flats in east London, forcing people to evacuate their homes as it spread over six floors.
At least 20 flats destroyed by massive fire and a further 10 homes are damaged by heat and smoke as about 100 firefighters and 15 fire engines are called in, reports Sky news.

The blaze took hold in De Pass Gardens, Barking, at about 15:30 BST, reports BBC quoting London Fire Brigade.Firefighters extinguished the blaze at 18:00 after more than two hours of hectic effort to subdue the fire. The cause behind the fire is being investigated.

London Ambulance Service said there were no reports of any injuries.

Resident Mihaela Gheorghe said she had “raised several issues” about the safety of wooden balconies on the blocks of flats.

She added: “I was in my fourth-floor flat when the fire started. We ran out. The fire brigade came but they found it hard to find a water supply at first.”

“We said that one day a fire is going to happen.”We raised several issues to the builder, the maintenance companies and the council about the safety of having all these wooden balconies.”

Mukhtar Raja, who lives nearby, said he saw flames when he looked out of his window.

“The heat was unbearable and it was spreading so fast. I went outside and filmed the footage with my phone.

“The fact it was a tall building and the speed at which the fire was spreading was scary.”

People affected by the fire have been told to “take rest” at the Thames View Community Centre – about a mile away from the scene.

The London Ambulance Service said it was called out shortly after the fire began, but said “there are no reports of any injuries at the moment”.