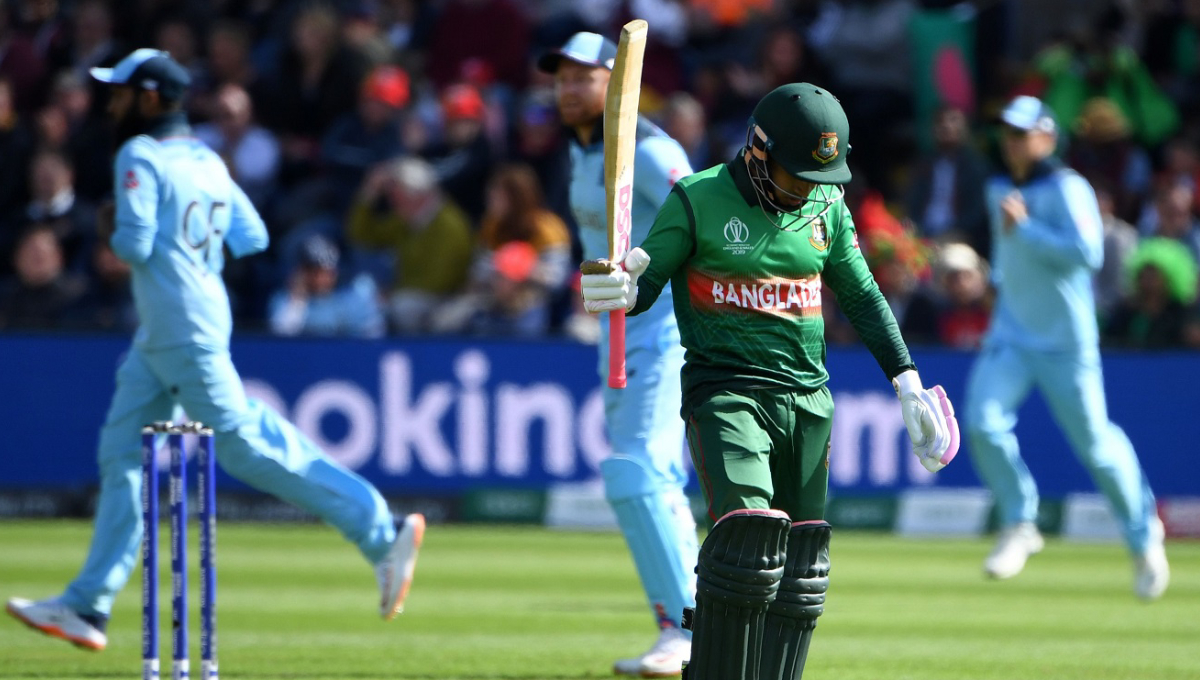 Cardiff, June 8 : After leaking a record 386 runs, Bangladesh tumbled for 280 all-out while chasing in their third game of the ongoing ICC Men’s World Cup against England at the Sophia Garden, Cardiff on Saturday. The rusty Tigers were outplayed by England by a big margin of 106 runs.

Bangladesh won the toss earlier and opted to bowl first. England posted a total of 386 for six wickets in 50 overs, which is the record of scoring most runs against Bangladesh in the World Cup. In reply, Shakib Al Hasan hit his first World Cup ton for Bangladesh but that was not enough for them to avoid an embarrassing loss as the Tigers tumbled for 280 in 48.5 overs.

In pursuit of 387, Bangladesh needed a brisk start but they failed to do so. Both Soumya Sarkar and Tamim Iqbal were defensive from the very start of their innings. This strategy of going slow did not help them as Soumya fell for only two, and Tamim made 19. They were hunted by Jofra Archer and Chris Woakes.

However, in the third wicket stand, Bangladesh added 106 runs with the help of Shakib and Mushfiqur Rahim. Mushfiqur fell for 44 off 50. Right after him, Mohammad Mithun suffered a duck while trying to clear Adil Rashid for a fancy shot.

Shakib completed his first World Cup century on the other end of the wicket. He took 95 balls to reach the hundred. He added more 21 runs before falling apart.

Mahmudullah (28) and Mosaddek Hossain (26) failed once again to respond according to the match situation. In the end, the Tigers tumbled for 280 all-out.

Earlier, England started their innings well as their openers reached the 100-run mark in 15 overs. This energetic start helped them continue their power hitting ability.

Bangladesh managed a wicket when England were on 128 in 18 overs. Mashrafe broke the opening stand removing Jonny for 50 off 51. Mehidy took an excellent low catch to dismiss him.

However, Bairstow’s removal was not enough to prevent England from scoring at a high strike rate as in 30 overs, England were at 185 for just one.

Along the way, Jason hit his first ton in the World Cup just in 92 deliveries with 12 fours and one big six. When Roy was accelerating to a big total, Joe Root fell only for 21 off 29. Saifuddin, who started his bowling conceding 16 runs in the first over, bowled him out.

The removal of Root did not make any impact on the way England was batting. Jason was hitting for boundaries after completing his ton. He fell for 153 off 121 deliveries with 15 fours and five sixes.

During the death overs, Chris Woakes and Liam Plunkett struck 18 and 27 respectively off eight and nine deliveries. Apart from them, Jos Buttler was also fiery as he hit 64 off 44 with two fours and four sixes.

Eventually, England posted a mammoth total of 386 for six wickets, which is now the highest team total against Bangladesh in the World Cups. Along the way, England surpassed India’s 375 which they struck in 2011.

In the end, that mammoth total proved to be too good for the Tigers to chase down.

Bangladesh will take on Sri Lanka on June 11 at County Ground, Bristol, while England will face off West Indies in their next match on June 14 at The Rose Bowl, Southampton.