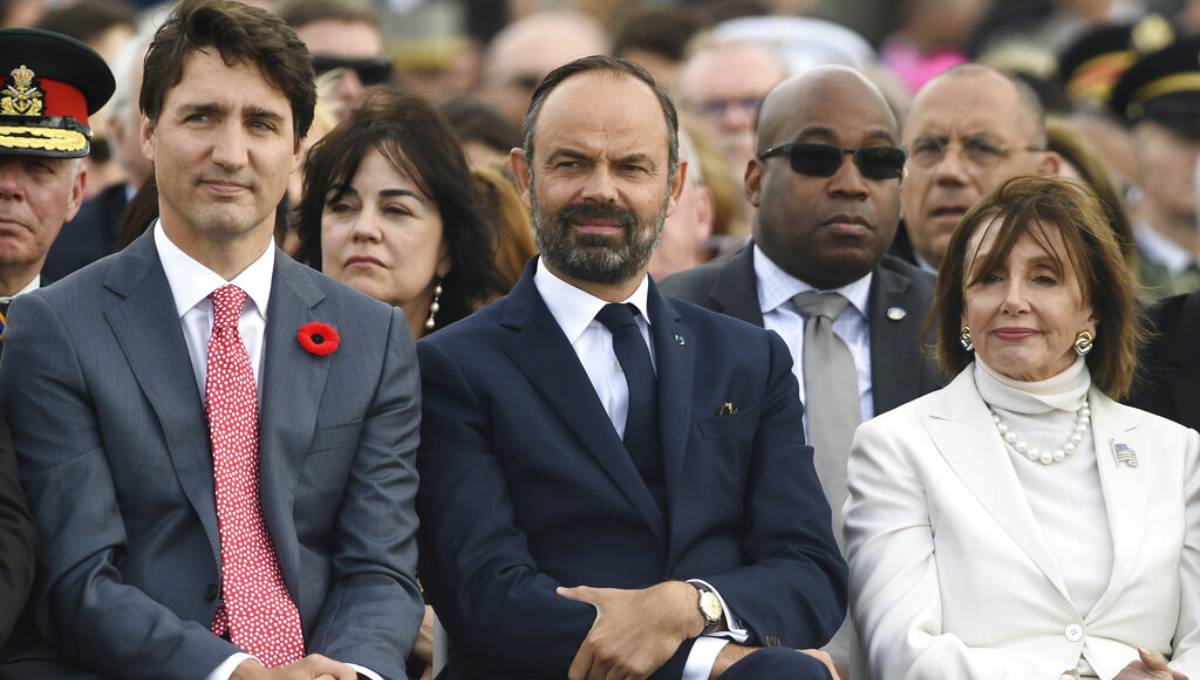 France, June 7 : Concluding D-Day celebrations at Juno beach, with birds singing in the background, French Prime Minister Edouard Philippe has made a plea for global peace and understanding.

Philippe attended the ceremony alongside Canadian Prime Minister Justin Trudeau and Nancy Pelosi, the Speaker of the U.S. House of Representatives, among other dignitaries from other countries.

They paid a last tribute to D-Day victims and veterans, laying wreaths of flowers on the sand where German machine guns, artillery and mortar shells greeted the Allied soldiers on June, 6, 1944.

“It’s up to all of us to recount the dread and the tears, but also and above all, to take action and affirm our desire to live in peace, to live in the concord of nations, to live free,” Philippe said.

After reading out the name of Allied countries, the French prime minister had some brotherly words for former enemy Germany.

“We will not forget the young German men who fell on the beaches,” Philippe said. “In 1944, they were enemy soldiers. Today, they too have found a final resting place here. Their children, their grandchildren, are not just our allies. They are our friends too.”

In his final speech at D-Day celebrations, French president Emmanuel Macron paid tribute to the French soldiers involved in the Normandy landings who fought for “France’s honor.”

A total of 177 French soldiers known as the Kieffer Commando unit stormed the heavily defended beaches of Nazi-occupied northern France on June 6, 1944.

“They were just a handful, but a handful of braves,” Macron said at the ceremony in Colleville-Montgomery, which was attended by 96-year-old Leon Gautier, one of three commandos in the unit who’s still alive. “They were almost a symbol, but what a powerful symbol for France’s honor.”

Hundreds of people have packed the seaside square in the Normandy town of Arromanches to applaud British troops who landed on nearby beaches 75 years ago.

A piper played as veterans of the Battle of Normandy, medals gleaming on their chests and some in wheelchairs, led a wreath-laying for the fallen outside the town’s D-Day Museum.

The band of the Royal Air Force Regiment serenaded veterans and supporters with the rousing “Dambusters March” and poignant wartime hit “We’ll Meet Again,” before a fly-past of vintage wartime RAF aircraft.

Arromanches played a key role in the Battle of Normandy as the site of an artificial harbor built soon after D-Day by the Allies to bring heavy equipment and hundreds of thousands of troops ashore to join the fight against Nazi occupiers.

Andrew Parker, a 33-year-old sax player from Orange County, California, filled up a plastic bottle with Omaha Beach sand, just as his grandfather did when he landed as an army scout shortly after D-Day in June 1944.

His grandson, who came to Normandy for Thursday’s anniversary to play with the Concordia Wind Orchestra band, said his sand will take pride of place on display next to his grandfather’s once he gets home.

Edward Parker was involved in the Market Garden battle in Holland, but other than that didn’t talk about his war, like many who lived through it.

Other people also filled bottles and flacons with sand.

This version corrects the spelling of Smucker’s jam.

Britain’s Prince Harry has praised the bravery of D-Day veterans during a meeting with Chelsea Pensioners in London.

Harry said he was “honored” to be in the presence of veterans after meeting with six former servicemen who were involved in the hazardous landing operation on the beaches of Normandy.

“On this 75th anniversary of D-Day, I can comfortably speak for everyone when I say we are honored to be in the presence of six Normandy landing veterans,” Harry said.

“To all who are on parade today, I can only say that you are a constant reminder of the great debt we owe those who have served this nation.”

The prince is a former military officer who took part in the Royal Hospital Chelsea’s annual Founder’s Day celebrations.

He wore his peaked cap, Blues and Royals frock coat and carried a sword at the event.

Canadian Prime Minister Justin Trudeau is hailing D-Day fighters who sacrificed their lives 75 years ago on the beaches of Normandy for future generations, “for you and me.”

Speaking Thursday where 14,000 Canadians landed on June 6, 1944, Trudeau said they “took a gamble the world had never seen before.” Thousands never made it home, many killed that very first day of the allied battle against the Nazis for Normandy.

He lauded the resulting world order including the United Nations and NATO that have helped ensure peace since World War II.

He called it “the responsibility of all Canadians to ensure that their story and their sacrifice will never be forgotten.”

Commemorations of British sacrifices on D-Day have moved on to Bayeux War Cemetery, the largest Commonwealth World War II cemetery in France.

Prince Charles and his wife Camilla, Duchess of Cornwall, spoke before the service to some of the elderly veterans who have travelled to Normandy to mark the 75th anniversary of the Allied invasion of Nazi-occupied France.

Veterans and dignitaries including Prime Minister Theresa May sang hymns and heard prayers amid the neat rows of gravestones of the cemetery where more than 4,000 British and Commonwealth troops — and several hundred German soldiers — are buried.

Frank Baugh, a 95-year-old Royal Navy veteran who helped ferry 200 British troops across the Channel on D-Day to Sword Beach, told the congregation that “my most abiding memory of that day is of seeing our boys — we’d been talking to them minutes before — cut down with machine-gun fire.”

“We couldn’t get them out, we couldn’t help them. That is my most abiding memory, and I can’t forget it.”

President Donald Trump is praising the veterans of D-Day, saying they are “among the very greatest Americans who will ever live.”

Trump spoke in France at the Normandy American Cemetery of Colleville-sur-Mer, near Omaha Beach, where the Americans landed on June 6, 1944.

Trump said that on that day —75 years  ago— 10,000 men sacrificed their lives not only for their fellow troops and their countries, but for the “survival of liberty.”

Trump says the ground the allied forces captured during the invasion “won back this ground for civilization.”

Marking 75 years since the epochal invasion of Normandy, Macron told a gathering of veterans and families of those fallen: “On behalf of my nation I just want to say thank you.”

He said the words in English, and World War II veterans gathered with him at the Normandy American Cemetery stood in applause.

Macron also praised the ambition and bravery of the United States, saying “your country is never so great as when it fights for universal values.”

Thousands of people and a handful of surviving U.S. D-Day veterans are gathering at the Normandy American Cemetery to honor thousands fallen in the pivotal invasion 75 years ago.

Veterans themselves took places on the stage where President Donald Trump and French President Emmanuel Macron are to speak, to the sound of wartime American songs and military music.

Veterans’ families, including children, settled in the front rows, while other guests clustered amid the vast expanse of rows of white crosses stretching through carefully trimmed lawns on a bluff overlooking Omaha Beach, the plunging view on the Atlantic a reminder of the sacrifices of American soldiers.

About 12,000 people were expected at the ceremony. Macron will award five U.S. veterans the Legion of honor, France’s highest distinction.

Britain’s Prince Charles, his wife Camilla and Prime Minister Theresa May are attending a service of remembrance in Bayeux, the first Normandy town liberated by Allied troops after D-Day.

Veterans and their families have filled the medieval cathedral for the service, which involved British and French clergy, the band of the RAF Regiment and the choir of Hereford Cathedral in England.

Cardinal Marc Ouellet read a message from Pope Francis, saying D-Day was “decisive in the fight against Nazi barbarism” and paying tribute to those who “gave their lives for freedom and peace.”

World leaders including French President Emmanuel Macron and U.S. President Donald Trump are taking part in events across Normandy to mark 75 years since the Allied invasion of Nazi-occupied France began on June 6, 1944.

The president of France and prime minister of Britain are saying “thank you” to D-Day veterans and those who died in the landmark invasion exactly 75 years ago.

Uniformed veterans in their 90s looked on as British Prime Minister Theresa May and French President Emmanuel Macron spoke Thursday at a ceremony at Ver-Sur-Mer laying the cornerstone of a new memorial that will record the names of thousands of troops under British command who died on D-Day and the ensuing Battle of Normandy.

May said, “If one day can be said to have determined the fate of generations to come, in France, in Britain, in Europe and the world, that day was the 6th of June, 1944.”

To the veterans, she said “the only words we can – thank you.”

Macron thanked the veterans and “all those who were killed so that France could become free again.”

The event was among several being held throughout Thursday marking the 75th anniversary of the Allied invasion that helped turn the tide of World War II against the Nazis.

Many people commemorating D-Day’s 75th anniversary worry that the sacrifices of the pivotal World War II invasion are being forgotten.

And that’s why they gathered at dawn Thursday all along Normandy’s landing beaches, holding flags, staring into the waves or thinking of the first waves of soldiers falling in the hail of German fire on June 6, 1944.

Richard Clapp, a 44-year-old former U.S. paratrooper and computer store owner from Julian, North Carolina, says: “If you forget history, it is doomed to repeat itself.”

Mike Connor, a 43-year-old Ford truck maker from Louisville, Kentucky, carried a black-and-white photo in his shoulder pocket of his great-uncle, John Connor, who fought in the Battle of the Bulge.

Arnold Omitt, a 52-year-old of Mesa, Arizona, described “a sense of appreciation for a whole generation of people who came here and liberated the continent from Nazi tyranny.”

D-Day veterans and other people are marking exactly 75 years since the invasion of Normandy that helped change the course of World War II.

The sea of mercury blue couldn’t have been more peaceful as the sun rose Thursday over Omaha Beach. About 100 people gathered at dawn on the edge of the waters that ran red here on June 6, 1944, the first of five code-named beaches where Allied forces came ashore to push the Nazis out of France.

Norwegian Sigrid Flaata drove from Oslo in a 1942 restored jeep to honor the soldiers who died on D-Day. Belgian Filip Van Hecke called his journey a “small effort to pay homage.”

Theresa May officially steps down as Tory leader