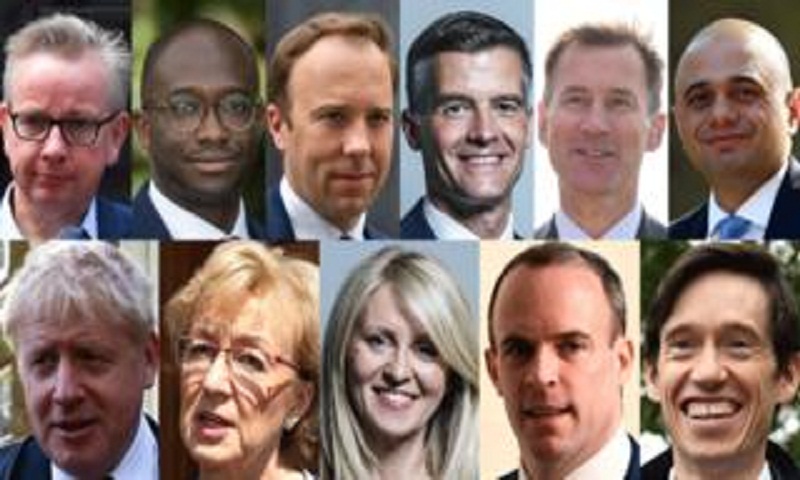 London, June 7 : Caught up in political turmoil (Italy and Germany) or scandal (Austria), in government-making (Denmark) or government dissolution (Greece), EU leaders are keeping only half an eye on the dizzying spectacle of the Conservative Party leadership race.
But they are well aware that reality will come knocking soon enough on Brussels’ door.

The new UK prime minister will be hungry to make his or her name, to go down in history books as the one who “solved Brexit”.

And therein lies the clue as to why EU leaders aren’t paying too much attention – yet.

It’s easy for Tory leadership hopefuls to promise a pain-free no deal Brexit, a thorough renegotiation with Brussels, a possible second referendum or a definite exit by 31 October (the date the current Brexit extension runs out).

Making good on those promises could prove rather more challenging. And the EU knows the next UK prime minister will have to be seen to be trying hard.

And so, inevitably, if desperately unwillingly, the minds of EU diplomats are slowly beginning to return to The Thorniest Brexit issue of all: the backstop.

If the new UK prime minister intends to leave with a deal, then he or she will very likely come to Brussels (as well as trying their luck in Berlin and Paris) asking for changes.

Now, the official EU response is well-rehearsed: “The Withdrawal Agreement (which includes the backstop) is closed. It was signed off by Theresa May and her cabinet. There will be no changes.”

But realpolitik means that, at the very least, EU leaders will feel obliged to listen politely to the Brexit proposals of the next occupant of no 10 Downing Street.

And they will want to listen IF they believe the new UK prime minister is serious and capable of triggering a no deal Brexit. All EU leaders – Emmanuel Macron included – want to avoid no deal.

And a new UK prime minister means new mathematics in parliament. The EU will be watching closely to see if he or she could reliably carry a parliamentary majority for a Brexit deal.

To be clear: this is not to suggest the EU would ditch the backstop if faced with a popular, hard-line Brexiteer UK prime minister. The EU fully intends to protect its single market, protect the Good Friday Agreement and protect member country Ireland, rather than make decisions in favour of departing member UK.

But talk is gradually returning in EU circles to the idea of “de-dramatising” the backstop. But that precise word is hardly used because of the outrage provoked in the UK when EU lead Brexit negotiator Michel Barnier tried the de-dramatising tactic back in summer/autumn 2018.

Instead EU diplomats are now at pains to underline that the backstop is not “a slab of marble” – meaning that bits of it can be shaved away as post-Brexit trade talks progress. An example I often hear is: as soon as an EU-UK post-Brexit deal is made on veterinary standards, then that can fall away from the backstop. The EU aim here is to convert the emotionally-charged backstop into a list of practical measures that can fall away at different times.

The thinking here in Brussels is that this could eventually be the EU counter-offer: if the new UK prime minister insists on a time-limited backstop, to present him or her with a time-tabled one instead.

It has been suggested to me that a time-tabled backstop could be a separate legal document added to the Withdrawal Agreement, meaning the EU could stick to its insistence on not re-opening the text.

Such a proposal could of course be dismissed as a transparent attempt at re-packaging the same old backstop. And what might be seen as a meaningless change by some in the UK, may well be viewed as too much of a concession by others in the EU but just as the new UK prime minister will have to weigh up how important he or she thinks it is to “get on with it” and get out with a deal, EU leaders will also weigh up the immediate likelihood and pain of no deal against the possibility of a slightly changed backstop.

As Theresa May tried to underline in her resignation speech (and you might wonder if she is really the right person to point this out), it all comes down to compromise.

There are other EU voices who look at the Conservative party leadership candidates and wonder out loud if another “solution” to the backstop might be around the corner: a return to the original EU proposal of the backstop pertaining to Northern Ireland only, thus removing opposition from MPs who view the UK-wide backstop as a permanent customs union snare.

Staunch Unionists in parliament would object. The EU though has always been keen to point out how separate Northern Ireland already is from the rest of the UK. Separate in terms of laws (abortion, gay marriage and more) plus the fact that some regulatory checks are already carried out in the Irish Sea, because the island of Ireland is treated as a single unit for the purpose of animal health and disease prevention.

But all these are mere EU musings for the moment. No-one knows who the next UK prime minister will be.

What EU-UK discussions will look like come September will depend on the mood amongst the majority of EU leaders, the Dublin perspective and crucially, the politics, credibility and parliamentary support of the new UK prime minister.

Something for him or her to bear in mind, perhaps, is that leaving the EU without a deal does not mean leaving the backstop behind.

EU preconditions to sitting down with the UK to discuss a trade deal will be that the UK pays the money pledged while an EU member, settles the issue of citizens’ rights and deals with the Irish border conundrum – the three issues contained in the Withdrawal Agreement.

It’s going to be a politically hot autumn both sides of the channel but for now EU leaders look forward to a Brexit-free summit on the 20 June.

There’s to be a brief “stock-taking” by the European Council President Donald Tusk on the current Brexit extension. But Chancellor Merkel, President Macron et al will have to keep their thoughts to themselves. No time has been allotted for debate.

There are other, for now more pressing issues on EU leaders’ plates.

Desperate Tigers keen to turn things around in Cardiff