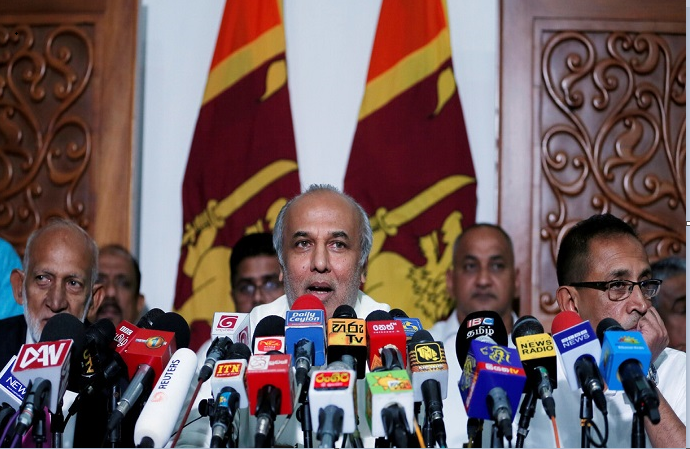 Muslim ministers and their deputies in Sri Lanka, along with two governors, announced their resignations, an internet newspaper reported Monday.
The senior officials decided to resign citing the “government’s failure to ensure the safety of Muslims following Easter Sunday attacks,” according to colombopage.com.

On April 21, Easter Sunday, eight explosions targeted different locations in and outside the Sri Lanka capital of Colombo, killing at least 250 people. The government accused National Thowheed Jamath (NTJ), a local Muslim group, of organizing the blasts.Minister of Highways and Road Development and Petroleum Resources Development Kabir Hashim said “certain groups” were trying to destabilize Sri Lanka despite all members affiliated with the attacks being captured, adding Muslim Cabinet members resigned with a view to safeguarding the country.

The move by Muslim officials came after Athuraliye Rathana, parliamentarian hardline Buddhist monk, launched a fast-unto-death May 31, seeking resignation of the governors in Western and Eastern provinces along with a minister, Rishad Bathiudeen, alleging links to NTJ.

On the eve of the Easter terror attacks, the government temporarily imposed a nationwide curfew; however, the it was re-imposed after several mosques and Muslim-owned businesses were attacked by mobs and a Muslim man was killed.