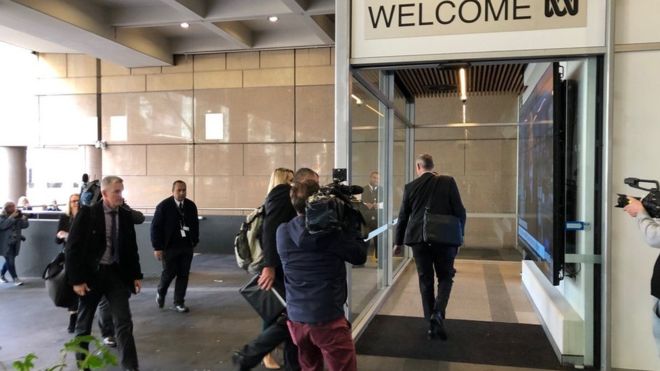 Police have raided the Sydney headquarters of the Australian Broadcasting Corp (ABC), in a second day of searches targeting journalists.
Officers arrived at the public broadcaster with search warrants naming two reporters and the news director. The ABC has protested over the raid.

The police action is related to articles about alleged misconduct by Australian forces in Afghanistan.On Tuesday police searched the home of a News Corp journalist, sparking alarm.

According to the ABC, Wednesday’s search is about the 2017 investigative series known as The Afghan Files which “revealed allegations of unlawful killings and misconduct by Australian special forces in Afghanistan”.

The broadcaster said the series was “based off hundreds of pages of secret Defence documents leaked to the ABC”.

The Australian Federal Police said the warrant was in relation to “allegations of publishing classified material” and that it “relates to a referral received on 11 July 2017 from the Chief of the Defence Force and the then-Acting Secretary for Defence”.

The Afghan Files were published by the ABC on 10 July 2017.The police said Tuesday’s and Wednesday’s raids were not connected, adding: “Both however relate to separate allegations of publishing classified material, contrary to provisions of the Crimes Act 1914, which is an extremely serious matter that has the potential to undermine Australia’s national security.”

It defended its actions, saying they had “been independent and impartial at all times”.

ABC journalist John Lyons has been live-tweeting the raid since the police arrived on Wednesday morning. He said that police were going through 9,214 documents found on the ABC systems one-by-one, including “thousands of internal ABC emails”.

Let the joy of Eid spread amongst all: President