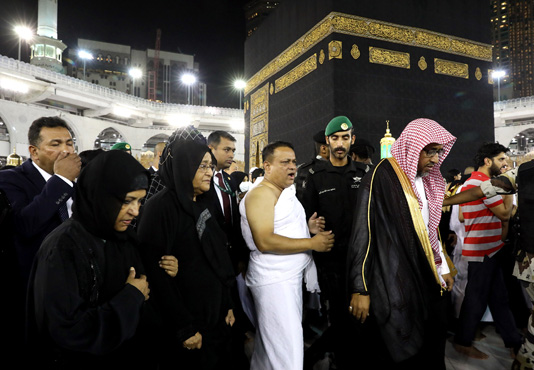 Makkah (Saudi Arabia), Jun 2 : Prime Minister Sheikh Hasina performed the holy ‘Umrah’ in the early hours of Sunday.
She is now on a three-day official visit to Saudi Arabia at the invitation of King Salman bin Abdulaziz Al Saud to attend the 14th OIC Summit.

Sheikh Hasina first performed ‘tawaf’ around the holy Ka’bah Sharif and later walked and ran between Safa and Marwa hills.She also offered prayers seeking divine blessings for the people of Bangladesh as well as continued peace, progress and prosperity of the entire Muslim Ummah.

Her younger sister Sheikh Rehana was also with her when she performed Umrah.

Later, the Prime Minister will leave Makkah to Madina to offer Ziarat at the Rawza Mubarak of Prophet Hazrat Muhammad (PBUH) on Sunday.

She will offer ziarat and perform Zoh’r prayer at the Rawza Mubarak of Prophet Hazrat Muhammad (PBUH).