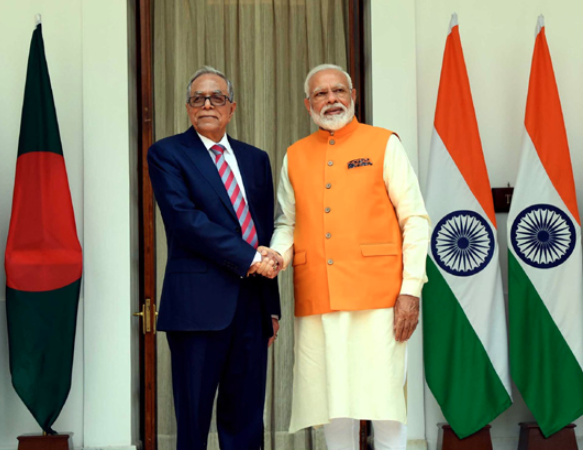 The people of Bangladesh have been waiting for years to see the Teesta River water sharing issue settled, President Abdul Hamid told Indian Prime Minister Narendra Modi on Friday.
“I believe an agreement will be signed soon, which will fulfill India’s commitment in this regard,” President Hamid said.

A deal on sharing the water of Teesta has remained pending since 2011 but the Indian government has been assuring Bangladesh that it is working to conclude the deal as early as possible.Indian Prime Minister Modi said that the unsettled bilateral issues “will be settled very soon” but he did not particularly mention the Teesta water sharing issue. He also stressed on strengthening and making the joint river commission effective.

President Hamid went to Delhi to join the swearing-in ceremony of Modi. They met at the Hyderabad House in New Delhi and during their discussion, the Rohingya issue also came up.

The President noted that the Rohingya issue has not only become a burden for Bangladesh but also a security threat for South Asia.

He said India is Bangladesh’s closest friend. “India’s role in early resolution of the Rohingya issue is very crucial,” he told Modi.

“India may create pressure for ensuring a congenial environment in Rakhaine State so that Rohingyas can voluntarily return to their homeland,” the President said.

Modi said that India always talks about the Rohingya issue in different international forums.“Rohingya issue is not a problem for Bangladesh alone. This is now everyone’s concern. India is always with Bangladesh in solving the issue,” the Indian Prime Minister said.

Hamid congratulated Modi on his reelection and conveyed the best regards of Prime Minister Sheikh Hasina.

“She and the people of Bangladesh are eagerly waiting to welcome you at an early date,” the President said.

He said that the Bangladesh-India bilateral ties have seen remarkable progress, virtually in all areas and noted that the neighbours amicably settled enclave and maritime boundary issues.

Addressing India’s security concern, the President said: “Bangladesh doesn’t allow its territory to be used by any terrorists, groups or entity against any state or people. We’ll never allow our territory for any terror activities.”

The President said he was looking forward to working closely with Modi and the Indian government in coming days to “move forward with common aspirations to further consolidate our relationships, settling all outstanding issues between the two countries”.

“It’ll also play a positive role in strengthening the bilateral and multilateral relationship [between Bangladesh and India],” Modi said.