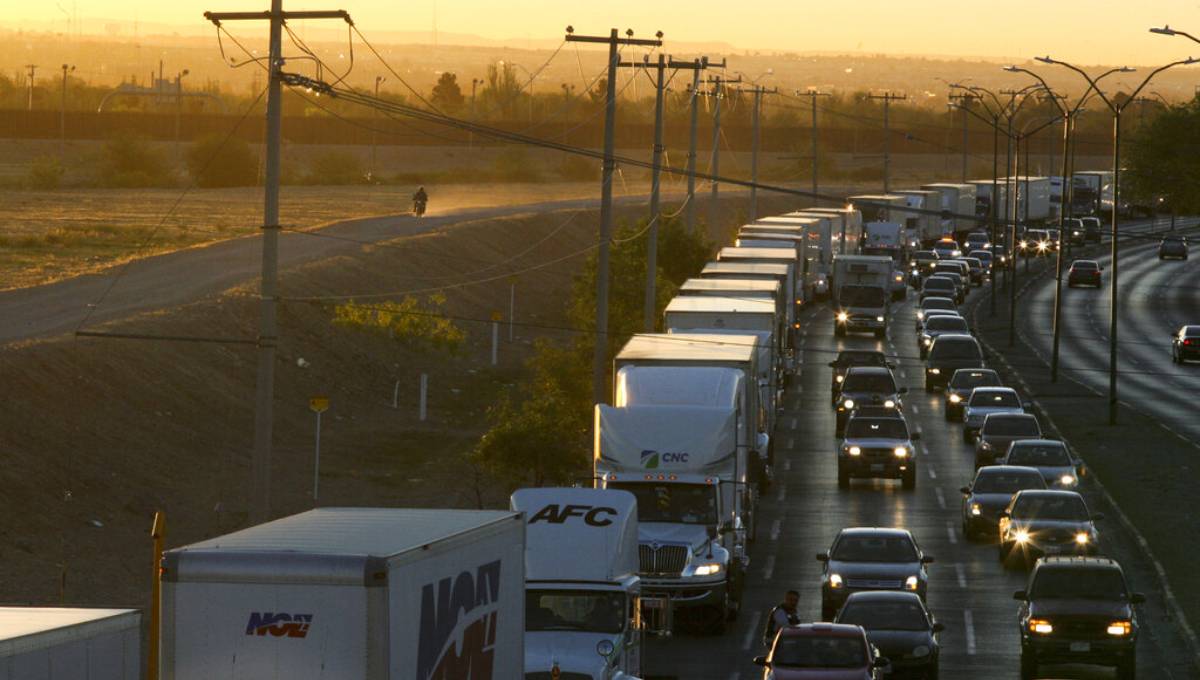 Photo: In this April 9, 2019, file photo, trucks wait to cross the border with the U.S. in Ciudad Juarez, Mexico. In a surprise announcement that could compromise a major trade deal, President Donald Trump announced Thursday that he is slapping a 5% tariff on all Mexican imports to pressure the country to do more to crack down on the surge of Central American migrants trying to cross the U.S. border.

Washington, May 31 : In a surprise announcement that could compromise a major trade deal, President Donald Trump announced Thursday that he is slapping a 5% tariff on all Mexican imports, effective June 10, to pressure the country to do more to crack down on the surge of Central American migrants trying to cross the U.S. border.

He said the percentage will gradually increase — up to 25% — “until the Illegal Immigration problem is remedied.”

Trump made the announcement by tweet after telling reporters earlier Thursday that he was planning “a major statement” that would be his “biggest” so far on the border.

“On June 10th, the United States will impose a 5% Tariff on all goods coming into our Country from Mexico, until such time as illegal migrants coming through Mexico, and into our Country, STOP. The Tariff will gradually increase until the Illegal Immigration problem is remedied,” he wrote, “at which time the Tariffs will be removed.”

Trump has accused the Mexican government of failing to do enough to halt the flow of Central American migrants who have been flowing to the U.S in search of asylum from countries including El Salvador, Honduras and Guatemala. And he has been itching to take increasingly radical, headline-grabbing action on the issue, which he sees as critical to his reelection campaign because it energizes his base.

But the sudden tariff threat comes at a peculiar time, given how hard the administration has been pushing for passage of the United States-Mexico-Canada Agreement that would update the North American Free Trade Agreement. It also comes less than two weeks after Trump lifted import taxes on Mexican and Canadian steel and aluminum, a move that seemed to clear an obstacle to passage of his North American trade deal.

The White House sees the deal, which was agreed to by the three nations’ leaders in November, as the cornerstone of Trump’s 2020 legislative agenda. But it needs approval from lawmakers in all three countries for it to be ratified.

Daniel Ujczo, an international trade lawyer based in Ohio, said the move puts lawmakers who want to vote yes in an awkward spot because companies in their home states and districts end up paying the tariffs. He also said the plan, if implemented, could slow down the deal’s ratification in Mexico.

Still, he and others wondered whether Trump — who has a habit of creating problems and then claiming credit when he rushes in to solve them — would actually go through with the threat.

“This seems more theater and tactics than a strategy to solve the migration crisis and rebalance North American trade,” he said.

Indeed, on a briefing call with reporters Thursday evening, acting White House chief of staff Mick Mulvaney said there were several things Mexico could do to prevent the tariffs from kicking in.

He said the White House had specifically refrained from setting specific benchmarks but would be looking at progress “on a day-to-day and a week-to-week basis.”

“We’re going to judge success here by the number of people crossing the border and that number needs to start coming down immediately, in a significant and substantial number,” he said.

He also insisted that tariffs were “completely” ”separate and apart from the USMCA” because one pertained to trade and the other immigration.

“The two are absolutely not linked,” he claimed.

Jesus Seade, the trade negotiator for Mexican President Andrés Manuel López Obrader, called the matter “most serious” but also downplayed it as an unlikely possibility.

“It is no secret to anyone that Trump is very active in his use of Twitter, and he launches many tweets that are later changed, he talks about something else and things stay there,” he said.

Trump’s tariff threat comes at a time when Mexican authorities have been stepping up their efforts, carrying out migrant raids and detaining thousands of people traveling through the country en route to the U.S.

The crumbling city of Tapachula, near the Guatemalan border, has become the epicenter of the crackdowns. Thousands of migrants have been stranded in the city because the Mexican government isn’t providing them visas that allow them to travel. Authorities this week have also been clearing out parks of camping migrants and raiding hotels where immigrants were staying.

And the Mexican government has allowed the U.S. to return hundreds of asylum seekers from Central America and other countries to force them to wait their cases out in Mexico — in one of only a few immigration policies that have not been immediately struck down by the courts.

The White House said Trump would be using the International Emergency Economic Powers Act to implement the tariff, and described a quickly escalating scheduled of increases.

“If the illegal migration crisis is alleviated through effective actions taken by Mexico, to be determined in our sole discretion and judgment, the Tariffs will be removed,” the White House said in a statement. But if Trump is not satisfied, the 5% figure will increase to 10% on July 1, to 15% on Aug. 1, to 20% on Sept. 1 and to 25% on Oct. 1, the White House said.

“Tariffs will permanently remain at the 25 percent level unless and until Mexico substantially stops the illegal inflow of aliens coming through its territory,” the statement read.

During a visit to Canada on Thursday to promote the trade deal, Vice President Mike Pence voiced optimism, vowing it would be passed this year. Asked by reporters about the impact of possible new tariffs, Pence said that both Mexico and Congress need to do more and that Trump is determined to use his authority to call on them to do so.

That could include closer cooperation and entering into a “safe third country agreement” that would designate Mexico as a safe haven for asylum-seekers and make it difficult for those who enter Mexico from later claiming asylum in the U.S. — something Mexico is reluctant to agree to.