Miss India contest: Why do all the finalists ‘look the same’? 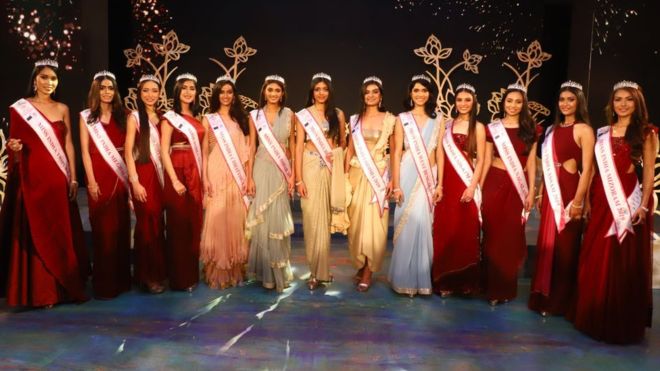 It is the contest that kick-started Bollywood superstar Priyanka Chopra’s career, so it is unsurprising that this year’s Miss India finalists have such wide smiles in their publicity shots.
After all, this is a competition with the power to change lives.

But instead of being able to enjoy their success, they have found themselves at the centre of a storm over a photo collage which, critics say, suggests the organisers are obsessed with fair skin.The collage published in the Times of India newspaper – which belongs to the group that organises the annual beauty pageant – depicts 30 headshots of beautiful women.

But when a Twitter user shared it and posed a question: “What is wrong with this picture?” it began to gain traction.

With their tame, glossy, shoulder-length hair and a skin tone that is virtually identical, some quipped that they all looked the same. Others wondered out loud – albeit as a joke – if in fact they were all the same person.

As the picture gained traction on Twitter, critics made the point that while there was nothing wrong with the image of the women themselves, the lack of diversity in skin colour has once again highlighted India’s obsession with being fair and lovely.

As social media chatter grew, we tried to get in touch with the organisers but there has been no response so far.Beauty pageants have been serious business in India since the mid-1990s. The country has produced several famous Miss Indias, like Aishwarya Rai, Sushmita Sen and Ms Chopra, who also won global titles. Many pageant winners have also gone on to have lucrative Bollywood careers.

Over the years, institutions that train young women aspiring to participate in beauty pageants have mushroomed across the country.

But again, many of their biggest successes have been women who are light-skinned.

This is hardly surprising.

India’s obsession with fairness, especially when it comes to women, is well known and many regard fair skin as being superior to darker tones.

It has always been accepted for instance, that fairer is better in the marriage market.

And ever since the 1970s, when Fair and Lovely – India’s first fairness cream – was introduced, skin whitening cosmetics have been among the highest selling in the country and, over the years, top Bollywood actors and actresses have appeared in advertisements to endorse them.

Commercials for such creams and gels promised not just fair skin but also peddled them as means to get a glamorous job, find love, or get married.

And pageants like this, which favour a particular type of skin tone, only serve to perpetuate that stereotype.