Alia, Ranbir feature in first ever ad together 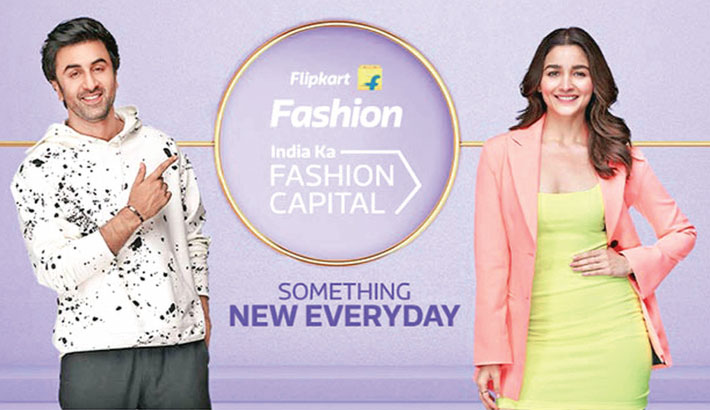 Actors Alia Bhatt and Ranbir Kapoor, who will be seen together for the first time in a film in Brahmastra, have gone ahead and featured in an advertisement instead, reports Hindustan Times.
Featuring in an ad for Flipkart, the couple come together only in the end of one of ads. In one of them, a boy, shows off his latest fashion in front of Alia, who is at a party in the company of her girl gang. At one point, one of the boys says he is wearing Ranbir’s look that the actor sported two months back at a premiere. Alia then shows him real Ranbir’s images in latest outfits from two days back. Embarrassed, the boys make a hasty retreat. One of Alia’s friends teases her about knowing every detail about Ranbir, to which Alia shrugs off with a self-assured grin. As the ad ends, the two actors walk towards the camera and pose in different outfits. In another ad, released along with the first one, Ranbir features without Alia.

In the movies, the couple will be seen for the first time in Ayan Mukerji’s Brahmastra. The release of film was postponed last month. The fantasy drama film, which was initially scheduled to release around Christmas this year, will now hit the big screens in summer 2020. The campaign is expected to be live on television and digital platforms, for a period of eight weeks till July. In addition to Alia and Ranbir, the campaign will also feature popular movie icons of South India, namely, Samantha Akkineni, Vijay Deverakonda and Dulquer Salman.Brahmastra is first part of a sci-fi trilogy which has been created by Ayan. The film has been extensively shot in Bulgaria, New York, and Mumbai, among other places. Apart from Ranbir and Alia, the film also stars Amitabh Bachchan, Mouni Roy and Nagarjuna.