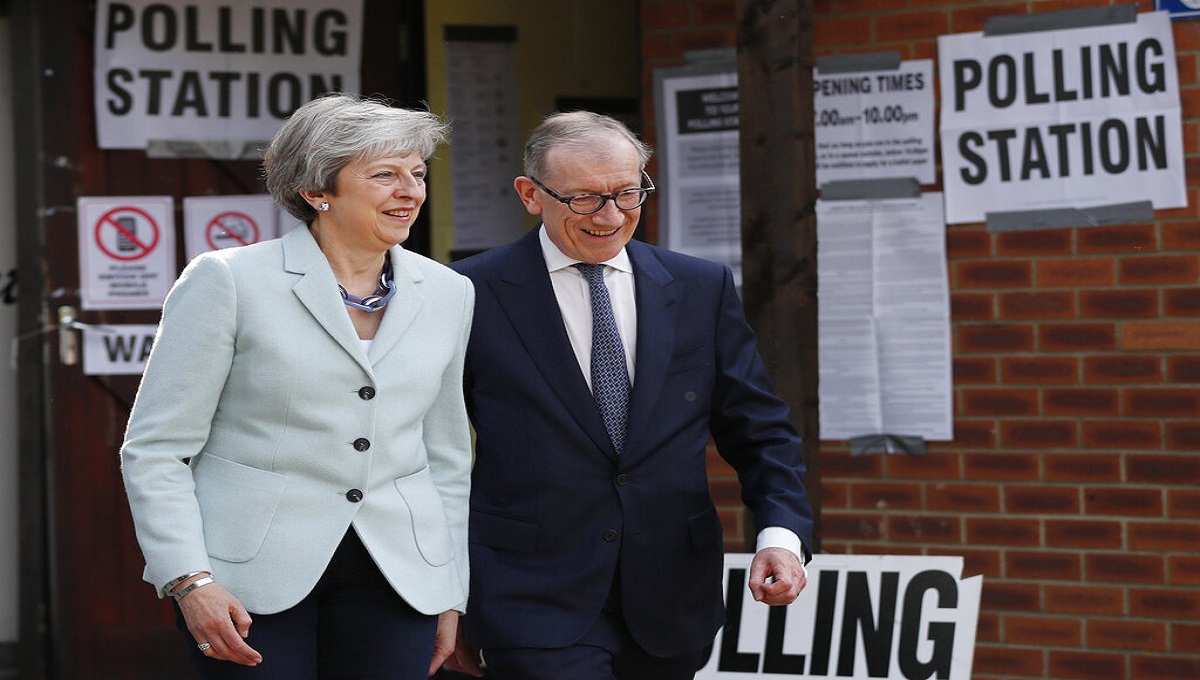 Photo : Britain’s Prime Minister Theresa May and her husband Philip leave a polling station after voting in the European Elections in Sonning, England, Thursday, May 23, 2019.

London, May 24 : Increasingly isolated, Prime Minister Theresa May backed down Thursday from plans to seek Parliament’s support for a Brexit bill already rejected by much of her Conservative Party, as expectations rose that she would cave in to demands that she resign and let a new leader try to complete the U.K.’s stalled withdrawal from the European Union.

Conservative lawmakers have given May until Friday to announce a departure date or face a likely leadership challenge. Several British media outlets reported that she would agree to give up the prime minister’s post June 10, sparking a Conservative leadership contest.

Geoffrey Clifton-Brown, treasurer of the committee that oversees Conservative leadership races, said that if May did not agree to leave, there would be “overwhelming pressure” for a no-confidence vote in her.

If May does name an exit date, she will likely remain prime minister for several more weeks while Conservative lawmakers and members vote to choose a successor.

May’s spokesman, James Slack, said she would still be in office when U.S. President Donald Trump comes to Britain for a June 3-5 state visit.

“She looks forward to welcoming the president,” he said.

Conservative lawmakers increasingly see May as an obstacle to Britain’s EU exit, although her replacement will face the same dilemma: a Parliament deeply divided over whether to leave the EU, and how close a relationship to seek with the bloc after it does.

Few doubt this is the endgame for May’s term, which has been consumed by Britain’s decision to leave the EU. Senior Conservatives, including former Foreign Secretary Boris Johnson and several members of her Cabinet, are already jockeying for position in the coming leadership race.

With her authority draining away by the hour, May on Thursday delayed plans to publish the EU withdrawal bill — her fourth and likely final attempt to secure Parliament’s backing for her Brexit blueprint.

House of Commons leader Andrea Leadsom — another likely contender — helped seal May’s fate when she resigned late Wednesday, saying she could not support May’s withdrawal bill. The draft contains measures aimed at winning support from the opposition, including a promise to let Parliament vote on whether to hold a new EU membership referendum.

That concession, which could ultimately lead to Brexit being halted, was the final straw for many Conservative lawmakers and ministers, who also balked at May’s offer of a close customs relationship with the EU, which would limit Britain’s trade autonomy.

Leadsom said May’s Brexit plan did not “deliver on the referendum result” that saw voters in 2016 opt to leave the EU.

“No one has wanted you to succeed more than I have, but I do now urge you to make the right decisions in the interests of the country, this government and our party,” Leadsom wrote in a resignation letter to May.

But she also delayed the bill, which May previously said would be published Friday and put to a vote during the week of June 3.

On Thursday, the government only promised an “update” on the bill during that week.

The political turmoil weighed on the pound, which fell to $1.2601 on Thursday, its lowest point against the dollar since early January.

May met Thursday with two of her most senior ministers, Foreign Secretary Jeremy Hunt and Home Secretary Sajid Javid, who underscored Cabinet concerns about her bill.

Slack said May was “listening to colleagues’ views” and still hoped to secure backing for her Brexit deal.

But he said delivering Brexit had “proved more challenging even than she had imagined.”

May became prime minister soon after the June 2016 EU membership referendum and has spent her entire tenure trying to deliver on that decision.

She seemed close to success when she struck a divorce agreement with the EU late last year. But lawmakers have rejected it three times, and Britain’s long-scheduled departure date of March 29 passed with the country still in the bloc.

Many Conservatives blame May for the delay, and want her replaced with a more ardent Brexiteer such as Johnson or former Brexit Secretary Dominic Raab.

May says another leader won’t be able to strike a better deal with the EU, which insists it will not renegotiate Britain’s departure terms.

Digital Minister Margot James stood up for May, saying the prime minister was being “hounded out of office because Parliament will not make a decision and the parties just have an inability to compromise.”

If May stays on until next week, pressure is likely to increase when results come in from this week’s elections for the European Parliament, with Conservatives expecting to receive a drubbing. Many British voters on both sides of the Brexit debate look set to use the election to the EU legislature to express displeasure over the political gridlock.

Opinion polls show strong support for the single-issue Brexit Party — largely from angry former Conservative voters — and for pro-EU parties including the Liberal Democrats and the Greens.

The election is being held on Thursday in Britain, but results won’t be announced until all 28 EU countries have finished voting late Sunday.

British newspapers were unanimous Thursday in declaring that the end was nigh for May.

The Conservative-backing Daily Telegraph said in an editorial that “either Mrs. May must go as soon as humanly possible, or the Conservative Party must finally remove her.”

The Daily Mail, which has been supportive of May, said that “despite her valiant efforts to deliver an honorable Brexit, she has finally run out of road.”

Jenner, Banderas, turn out for glitzy amfAR gala near Cannes

Modi surges to victory in India on Hindu-first platform