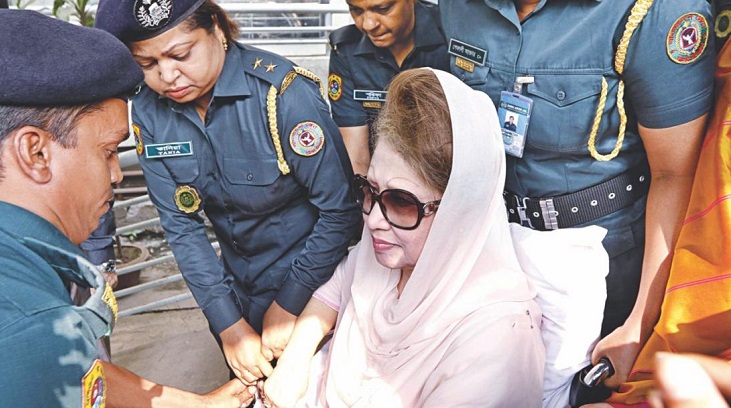 BNP senior leader Moudud Ahmed on Tuesday said they will soon move the Supreme Court challenging the government’s decision of setting up a makeshift court in Keraniganj Central Jail to hold the trial of various cases filed against its Chairperson Khaleda Zia.
“We visited Keraniganj Jail yesterday (Monday) and found no atmosphere and necessary facilities there to run the court and ensure justice,” he said.

Speaking at a human-chain programme, he further said, “We think, setting up such a court is contrary to the constitution. The constitutional right of a citizen to have justice will be violated through it. We’ll very soon challenge at the Supreme Court the legality of setting up a court in Keraniganj Jail.”Bangladesh Sammilita Peshajibi Parishad arranged the programme in front of the Jatiya Press Club demanding the release of BNP chairperson Khaleda Zia.

On May 13, the government announced that the trial proceedings of 17 cases filed against BNP Chairperson Khaleda Zia will be held at a special court set up in Keraniganj Central Jail in Dhaka.

Khaleda was sent to Old Dhaka Central Jail after she had been convicted in Zia Orphanage Trust Graft case on February 8, 2018. She has been receiving treatment at Bangabandhu Sheikh Mujib Medical University (BSMMU) for various health complications since April 1 last.

He said their chairperson has become very sick as she was kept in a solitary and abandoned jail for a long time. “We blame the government for her illness and deteriorating health condition. The country’s people also think the government is responsible for it.”

The BNP leader said they are taking all the necessary legal steps to free Khaleda from jail. “But we can’t succeed due to the government’s evil design. Even after that we’ll continue the legal process.”Moudud urged BNP leaders and activists to get ready for taking to the streets as he thinks it will not be possible to have Khaleda freed from jail without a movement. “We’ll carry out our fight both at the court and on the streets.”

No directive to stop providing visas to Pakistanis: FM