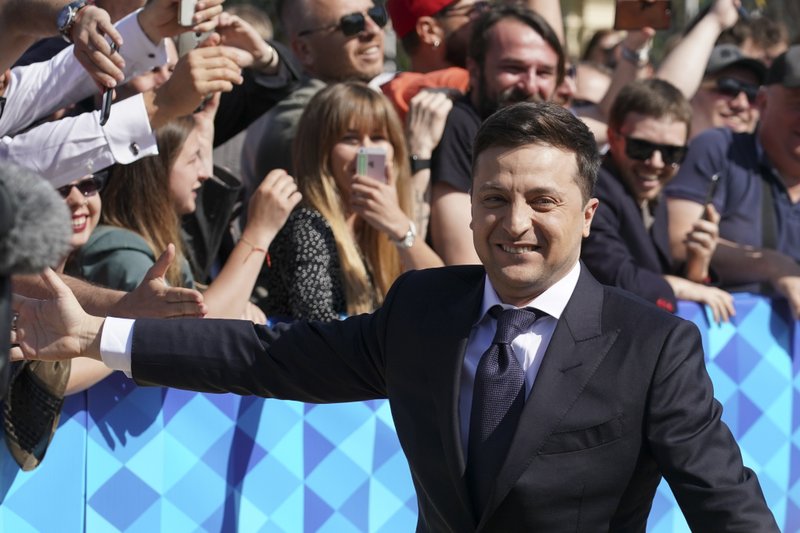 Kiev, May 20 : Ukrainian TV star Volodymyr Zelenskiy was sworn in as the country’s new president on Monday, promised to stop the war in the country’s east against Russian-backed separatists and immediately disbanded parliament, which he has branded as a group only interested in self-enrichment.

Even before he disbanded the Supreme Rada, which had been one of his campaign promises, the 41-year-old Zelenskiy had upended the traditions of Ukrainian politics.

He ditched the idea of a traditional motorcade to his inauguration, walking to the parliament through a park packed with people. Flanked by four bodyguards, he was giving high-fives to some spectators and even stopped to take a selfie with one of them.

Before he made the announcement, Zelenskiy asked the Supreme Rada to adopt a bill against illegal enrichment and support his motions to fire the country’s defense minister, the head of the Ukrainian Security Service and the Prosecutor General. All of them are allies of former President Petro Poroshenko, who lost the presidential election in a landslide to the comedian with no previous political experience.

In a feisty speech after his inauguration, Zelenskiy told the Rada that his main goal for the presidency is to bring peace to eastern Ukraine, where government troops have been fighting Russia-backed separatists for five years.

Zelenskiy garnered 73% of the vote at the presidential election last month in a victory that reflected Ukrainians’ exhaustion with politics-as-usual. For years, he has played the Ukrainian president in a popular television show.

The new president wrapped up his speech at parliament by referring to his career as a comedian.

Saudis say they will defend themselves, as Trump warns Iran