Saudis say they will defend themselves, as Trump warns Iran 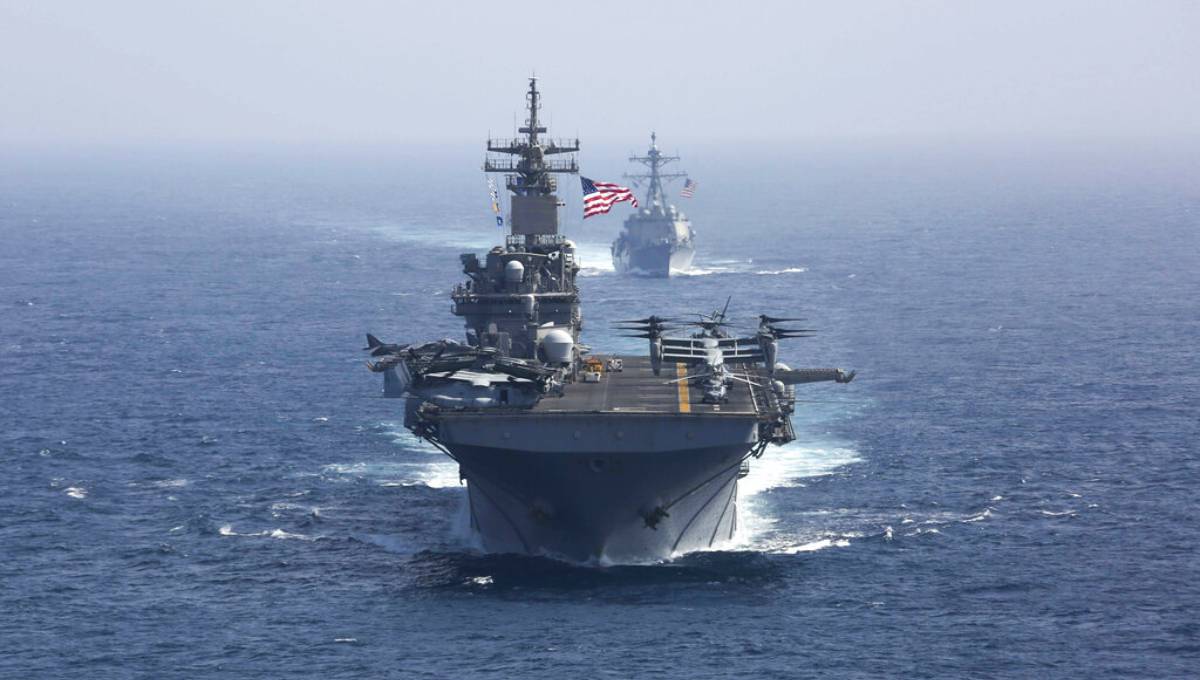 Photo: In this Friday, May 17, 2019, photo released by the U.S. Navy, the amphibious assault ship USS Kearsarge and the Arleigh Burke-class guided-missile destroyer USS Bainbridge sail in formation as part of the USS Abraham Lincoln aircraft carrier strike group in the Arabian Sea. Commercial airliners flying over the Persian Gulf risk being targeted by “miscalculation or misidentification” from the Iranian military amid heightened tensions between the Islamic Republic and the U.S., American diplomats warned Saturday, May 18, 2019, even as both Washington and Tehran say they don’t seek war.

Dubai, May 20 : Saudi Arabia does not want war but will not hesitate to defend itself against Iran, a top Saudi diplomat said Sunday after the kingdom’s energy sector was targeted this past week amid heightened tensions in the Persian Gulf.

U.S. President Donald Trump, meanwhile, warned Iran that it will face destruction if it seeks a fight, while Iranian officials said their country isn’t looking for war. Trump spoke after a rocket hit near the U.S. Embassy in Baghdad.

Adel al-Jubeir, the Saudi minister of state for foreign affairs, spoke a week after four oil tankers— two of them Saudi — were targeted in an alleged act of sabotage off the coast of the United Arab Emirates and days after Iran-allied Yemeni rebels claimed a drone attack on a Saudi oil pipeline.

“The kingdom of Saudi Arabia does not want war in the region and does not strive for that… but at the same time, if the other side chooses war, the kingdom will fight this with all force and determination and it will defend itself, its citizens and its interests,” al-Jubeir told reporters.

On Sunday night, the U.S. military command that oversees the Mideast confirmed an explosion outside the U.S. Embassy compound in Baghdad and said there were no U.S. or coalition casualties.

A State Department spokesman, who spoke on condition of anonymity, said that “a low-grade rocket did land within the International Zone near the U.S. Embassy.” The spokesman said that “attacks on U.S. personnel and facilities will not be tolerated and will be responded to in a decisive manner” and added that the U.S. will hold “Iran responsible if any such attacks are conducted by its proxy militia forces or elements of such forces.”

Earlier, after initial reports of the attack, Trump tweeted a warning to Iranian leaders: “If Iran wants to fight, that will be the official end of Iran. Never threaten the United States again!” Trump tweeted.

A senior Iranian military commander was quoted as saying his country is not looking for war, in comments published in Iranian media on Sunday.

Fears of armed conflict were already running high after the White House ordered warships and bombers to the region earlier this month to counter an alleged, unexplained threat from Iran. The U.S. also has ordered nonessential staff out of its diplomatic posts in Iraq.

Trump had appeared to soften his tone in recent days, saying he expected Iran to seek negotiations with his administration. Asked on Thursday if the U.S. might be on a path to war with Iran, the president answered, “I hope not.”

Sunday night’s apparent rocket attack was the first such incident since September, when three mortar shells landed in an abandoned lot inside the Green Zone.

Iraqi military spokesman Brig. Gen. Yahya Rasoul told The Associated Press that a Katyusha rocket fell near the statue of the Unknown Soldier, less than a mile from the U.S. Embassy. He said that the military was investigating the cause but that the rocket was believed to have been fired from east Baghdad. The area is home to Iran-backed Shiite militias.

As tensions escalate between the U.S. and Iran, there have been concerns that Baghdad could once again get caught in the middle , just as it is on the path to recovery. The country hosts more than 5,000 U.S. troops, and is home to powerful Iranian-backed militias, some of whom want those U.S. forces to leave.

The U.S. Navy said Sunday it had conducted exercises in the Arabian Sea with the aircraft carrier strike group ordered to the region to counter the unspecified threat from Iran. The Navy said the exercises and training were conducted Friday and Saturday with the USS Abraham Lincoln aircraft carrier strike group in coordination with the U.S. Marine Corps, highlighting U.S. “lethality and agility to respond to threat,” as well as to deter conflict and preserve U.S. strategic interests.

The current tensions are rooted in Trump’s decision last year to withdraw the U.S. from the 2015 nuclear accord between Iran and world powers and impose wide-reaching sanctions, including on Iranian oil exports that are crucial to its economy.

Iran has said it would resume enriching uranium at higher levels if a new nuclear deal is not reached by July 7. That would potentially bring it closer to being able to develop a nuclear weapon, something Iran insists it has never sought.

Energy ministers from OPEC and its allies, including major producers Saudi Arabia and Russia, are meeting in Saudi Arabia on Sunday to discuss energy prices and production cuts. Iran’s oil exports are expected to shrink further in the coming months after the U.S. stopped renewing waivers that allowed it to continue selling to some countries.

OPEC and non-OPEC oil producers have production cuts in place, but the group of exporters is not expected to make its decision on output until late June, when they meet again in Vienna.

The United Arab Emirates’ energy minister Suhail al-Mazrouei told reporters at the meeting he does not think relaxing the oil production cuts in place is the right measure.  His comments suggest there’s support within OPEC and other oil-producing nations, like Russia, to continue propping up oil prices after a sharp fall last year. Oil is now trading above $70 a barrel and closer to what’s needed to balance state budgets among Persian Gulf producers.

Saudi Arabia’s King Salman, meanwhile, has called for a meeting of Arab heads of state on May 30 in Mecca to discuss the latest developments, including the oil pipeline attack.

The kingdom has blamed the pipeline attack on Iran, accusing Tehran of arming the rebel Houthis, which a Saudi-led coalition has been at war with in Yemen since 2015. Iran denies arming or training the rebels, who control much of northern Yemen, including the capital, Sanaa.

“We want peace and stability in the region, but we won’t stand with our hands bound as the Iranians continuously attack. Iran has to understand that,” al-Jubeir said. “The ball is in Iran’s court.”

Al-Jubeir also noted that an investigation, led by the UAE, into the tanker incident is underway.

The head of Iran’s Revolutionary Guard, Gen. Hossein Salami, was quoted Sunday as saying Iran is not looking for war. But he said the U.S. is going to fail in the near future “because they are frustrated and hopeless” and are looking for a way out of the current escalation. His comments, given to other Guard commanders, were carried by Iran’s semi-official Fars news agency.

The USS Abraham Lincoln has yet to reach the Strait of Hormuz, the narrow mouth of the Persian Gulf through which a third of all oil traded at sea passes.

Huawei has immediately lost access to Android and Google