Nadal gets his revenge over Tsitsipas; Djokovic up next 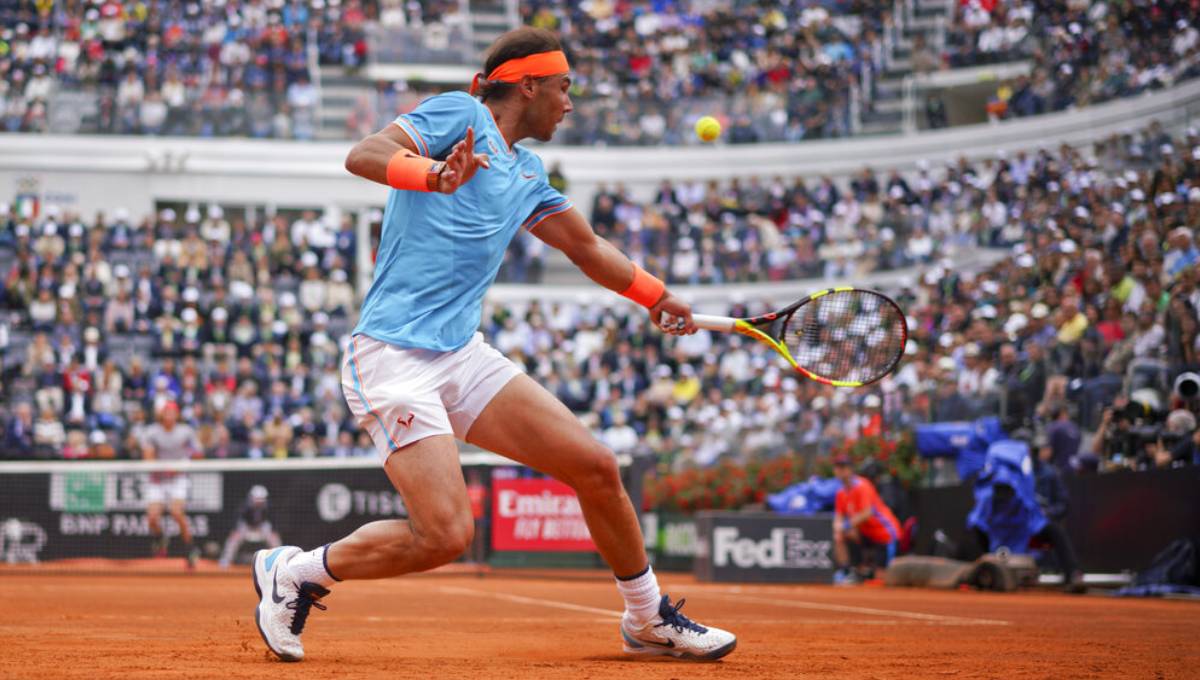 Photo: Rafael Nadal of Spain returns the ball to Stefanos Tsitsipas of Greece during a semifinal match at the Italian Open tennis tournament, in Rome, Saturday, May 18, 2019.

Rome, May 19 : After losing in the semifinals of three straight clay-court tournaments, Rafael Nadal looked more like his old, dominant self when he beat Stefanos Tsitsipas 6-3, 6-4 to reach the Italian Open final on Saturday.

It was a measure of revenge for Nadal after losing to Tsitsipas in three sets at this stage in Madrid last week. This victory should also restore Nadal’s confidence as he seeks a record-extending 12th title at the French Open starting next weekend.

“The main thing is I am playing better. If I play better, I know I’m going to have chances to be in finals and to win semifinal matches,” Nadal said. “If you are not playing well, (beating) the best players of the world is much more difficult. … I have margin to keep improving. But I am doing the right steps to be there.”

In Sunday’s final, Nadal will resume his rivalry with top-ranked Novak Djokovic, who faced an unusually high number of drop shots from Diego Schwartzman before winning 6-3, 6-7 (2), 6-3.

Djokovic also required three sets to eliminate Juan Martin del Potro in the quarterfinals, meaning he has been on court for more than 5 ½ hours over the last two days.

It will be the 54th career meeting between Djokovic and Nadal, with Djokovic leading the series 28-25. The pair has split the four Italian Open finals they’ve played. They last met in the Australian Open final won by Djokovic in straight sets.

“He’s my greatest rival of all time,” Djokovic said. “Every time we get to play each other it’s a thrill. It’s the ultimate challenge.”

Nadal is aiming for a record-extending ninth trophy in Rome while Djokovic is seeking his fifth title at the Foro Italico.

Nadal is in the middle of his longest title drought to begin a season since he came onto the scene in 2004. His last trophy came last August in Toronto.

The crowd attempted to encourage Tsitsipas with chants of “Tsi-Tsi-Tsi, Pas-Pas-Pas” but the 20-year-old Greek player couldn’t keep up with Nadal on the long rallies — even though he didn’t play a day earlier after Roger Federer withdrew injured from their quarterfinal.

Conditions were much slower than on the high-altitude court in Madrid, which favored Nadal and made it tougher for Tsitsipas to execute his attacking game.

“The shots that I played today, I played similar shots last week,” Tsitsipas said. “Today those shots felt really slow and he had plenty of time to pass me when I was approaching to the net. .. The court speed was the difference.”

Midway through the first set, Nadal produced a blistering forehand winner up the line on the run, drawing a loud roar from the packed Campo Centrale crowd.

In the women’s tournament, Johanna Konta rallied past sixth-seeded Kiki Bertens 5-7, 7-5, 6-2 in nearly three hours to reach the biggest clay-court final of her career.

Pliskova didn’t immediately realize she won because she lost track of the score.

Pliskova is having a solid year, having reached the Australian Open semifinals and the Miami Open final after opening the season with a title in Brisbane, Australia. The Czech player recently announced she promoted four-time Italian Open champion Conchita Martinez as her head coach.

Konta’s only previous final on clay came recently in Rabat, Morocco, where she lost to Sakkari.

“I’ve never really doubted my ability on the surface,” Konta said. “I won a lot of my first junior titles, first professional titles on clay. I’ve always felt that I have a game that has the ability to do well on this surface.”

This is my second innings: Obaidul Quader