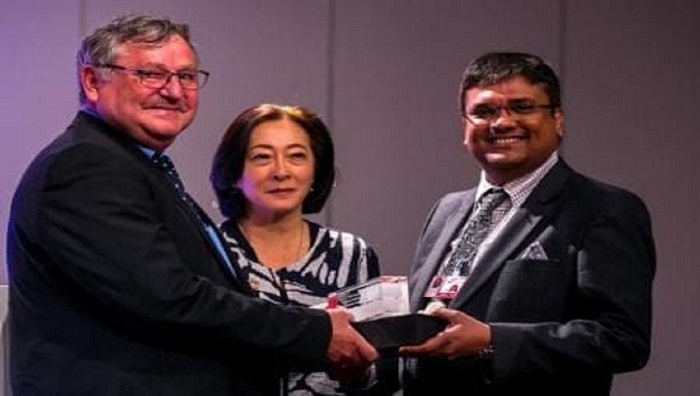 A project that pioneers floating houses in Bangladesh has won the prestigious RISK Award 2019.
It has been designed in a way so that it can house a family of six, and they can survive flood and produce their own food, including vegetables, chickens and fish.

The €100,000-prize, sponsored by the Munich Re Foundation, was accepted by Nandan Mukherjee on behalf of Dundee University, Scotland, and Resilience Solution, Bangladesh.The organisers, the Munich Re Foundation, Global Risk Forum (GRF) Davos, and the United Nations Office for Disaster Risk Reduction received 109 applications from 48 countries in response to a call for applications focused on coastal resilience in the face of climate and environmental changes.

Mizutori said: “This week, at the sixth Global Platform, we have heard time and again about the benefit of investing before a disaster strikes, rather than responding to its effects. This is a great example of the kind of investment that the world needs.”

On behalf of the Munich Re Foundation, Chairman Thomas Loster, congratulated the winner and noted that around 40 percent of the world’s population live in coastal areas less than 100 kms from the sea.

“There are lots of challenges, including rising sea levels, heavy rainfall, and intense storms. So, the RISK Award is very pleased to encourage innovations such as these floating homes which can be replicated in many parts of the world.”

In his acceptance speech, Mukherjee said the idea of disaster-resilient homes was prompted by a story he heard from a woman who lost a child in a flood and was then abandoned by her husband.“She blames herself every single day, and she told me that she will never take another child or try for a family again in her life because she is unable to safeguard poor lives,” he said.

Mukherjee continued: “The area was protected by flood embankments and people living inside the area did not anticipate flooding, therefore they were living in a false sense of security that they are protected from flood. However, the reality was something else. They didn’t go to the emergency ‘safe’ shelter, because ‘safe’ shelters are not as safe as it sounds.

“Numerous literatures document the occurrences of rape, child abuse, inadequate space, poor water supply and sanitation access, inadequate food in the shelters. Most importantly, there is no provision for continuing the daily livelihood in the safe shelters.”

So, the idea of a disaster-resilient home was born and the prize money will be used to help bring the project to scale in the flood prone river basins and deltas of Bangladesh, he said.

Mukherjee explained a truly disaster-resilient home needs the following: It needs to robust enough to float above the flood water, providing safety. “It needs to generate enough food with proper nutritional balance. It needs access to water, electricity and all other basic amenities.”

The outside walls of the house can be used for vertical gardens, we can harvest rainwater for self-sufficiency in drinking water, they can utilise renewable energy solutions for electricity, and further utilise modern technologies like aquaponics and poultry rearing for livelihood and waste recycling.

No bar to make report on sub-judice cases: Anisul