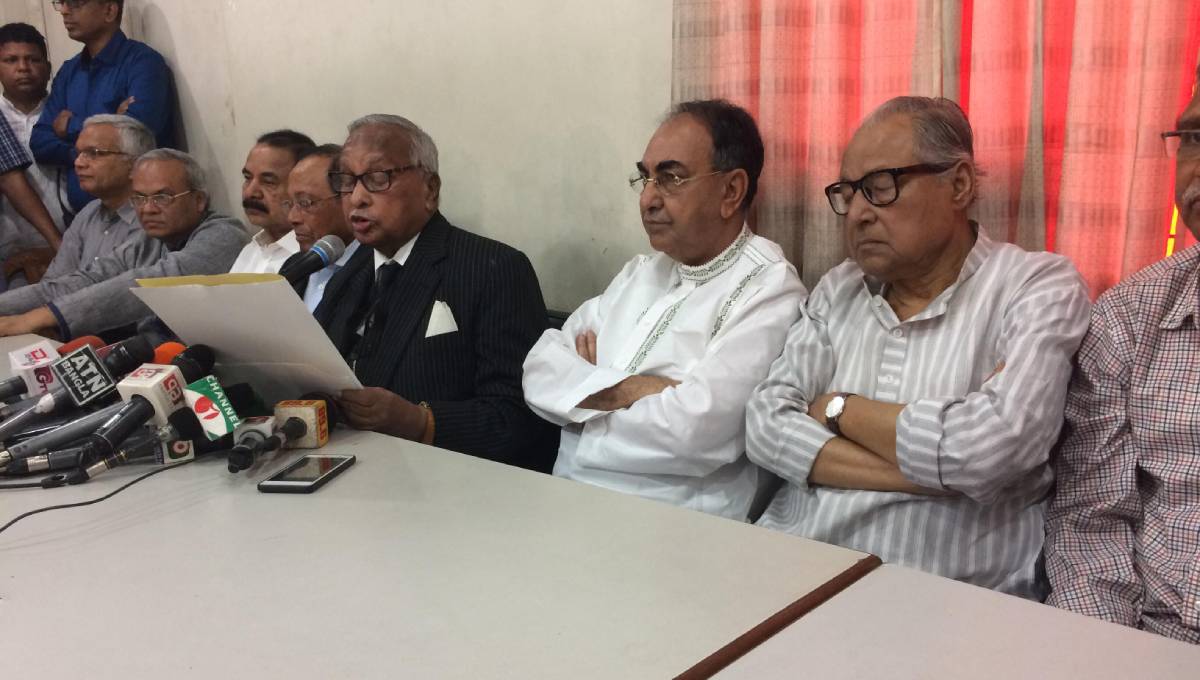 Photo: Barrister Jamiruddin Sircar Speaks at a press conference at Nayapaltan central office on Saturday, May 18, 2019.

Dhaka, May 18 : BNP on Saturday alleged that the government is pushing BNP Chairperson Khaleda Zia towards a tragic consequence through “torturing’ her both physically and mentally”.

Speaking at a press conference, party standing committee member Barrister Jamiruddin Sircar also said keeping Khaleda in jail depriving her of bail is contrary to the constitution and human rights since no case against her is yet to be disposed of finally by the Supreme Court.

“Khaleda Zia’s life and health has become very risky because of staying in an unhealthy atmosphere in jail for a long time. She’s now in between death and life,” Sircar said.

He also said proper legal processes were not followed in convicting Khaleda in “politically motivated” cases.

Sircar, also a former Speaker of parliament, said their chairperson is now at a serious risk of sudden cardiac arrest due to repression and unusual mental pressure on her in an adverse situation in jail.

He said Khaleda cannot eat anything, except rice porridge, for a few days due to blisters inside her mouth.

Besides, the BNP leader said, their chairperson has long been suffering from pain in her left hand and arm. “But now the pain has spread to her right hand. She is now enduring serious pain in her both hands.”

He said the Khaleda’s blood sugar level is not coming under control even after using insulin. “She’s also in a very risky condition due to high blood sugar.”

The BNP leader also criticised Prime Minister Sheikh Hasina for what he said her recent remarks that Khaleda is gladly taking payesh (rice pudding) and staging a drama in the name of illness. “Such remark by a prime minister over the sickness of an elderly and popular politician is unprecedented.”

He also said the Home Minister made an ‘untrue’ remark that Khaleda’s blood sugar is under control.

At a programme in London, Sircar said, the Prime Minister told her party men that Khaleda Zia would never be freed from jail.  “After returning home, she is now implementing it.”

The BNP leader alleged that justice has disappeared from the country as it is now under the grip of an authoritarian ruler. “Keeping Khaleda Zia in jail without granting her bail is the manifestation of injustice and unfairness of the current regime.”

He demanded the government immediately release Khaleda Zia from jail, and allow her receive proper treatment at a hospital of her choice.

Replying to a question, Sircar said they have now no plan to apply for Khaleda’s release on parole.

BNP standing committee member Moudud Ahmed said the government is trying to shift Khaleda Zia to Keraniganj Jail as part of a conspiracy.

Replying to a question, another BNP standing committee member Mirza Abbas said they will take effective steps at the right time to force Awami League to accept their demand of releasing Khaleda from jail.