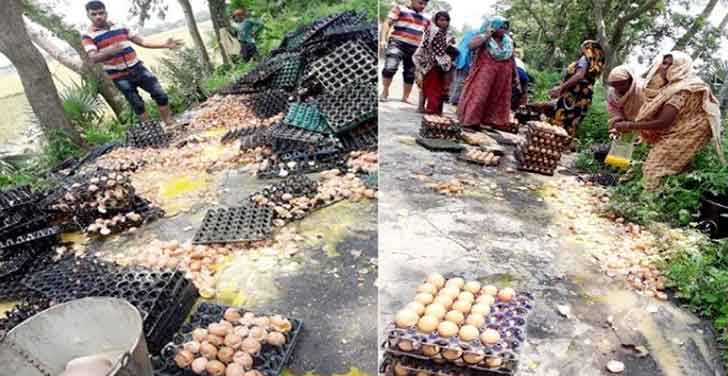 Six policemen have been closed for destroying more than 35,000 eggs in Boraigram upazila of Natore allegedly after the egg trader refused to pay them bribe.
Jahangir Hossain, superintendent of Bogura Highway Police, said that the decision was taken on Friday following a complaint lodged by victim egg vendor Biplob Kumar Saha. However, he didn’t disclose their identities.

The accused policemen were closed to Bogura region of highway police.Shahidullah, a police official, was asked to submit a report within 3 working days after investigating the incident.

According to Biplob Kumar Saha, a pick-up van carrying 35,100 eggs fell beside Bonpara highway as one of its tyre punctured in Agran Sutirpar area on Thursday morning. A team of on-duty highway police demanded Tk 20,000 as bribe to salvage the pickup.

As he denied to give them the bribe, they cut off the rope of the pickup van which tied up the eggs with it, destroying the eggs.