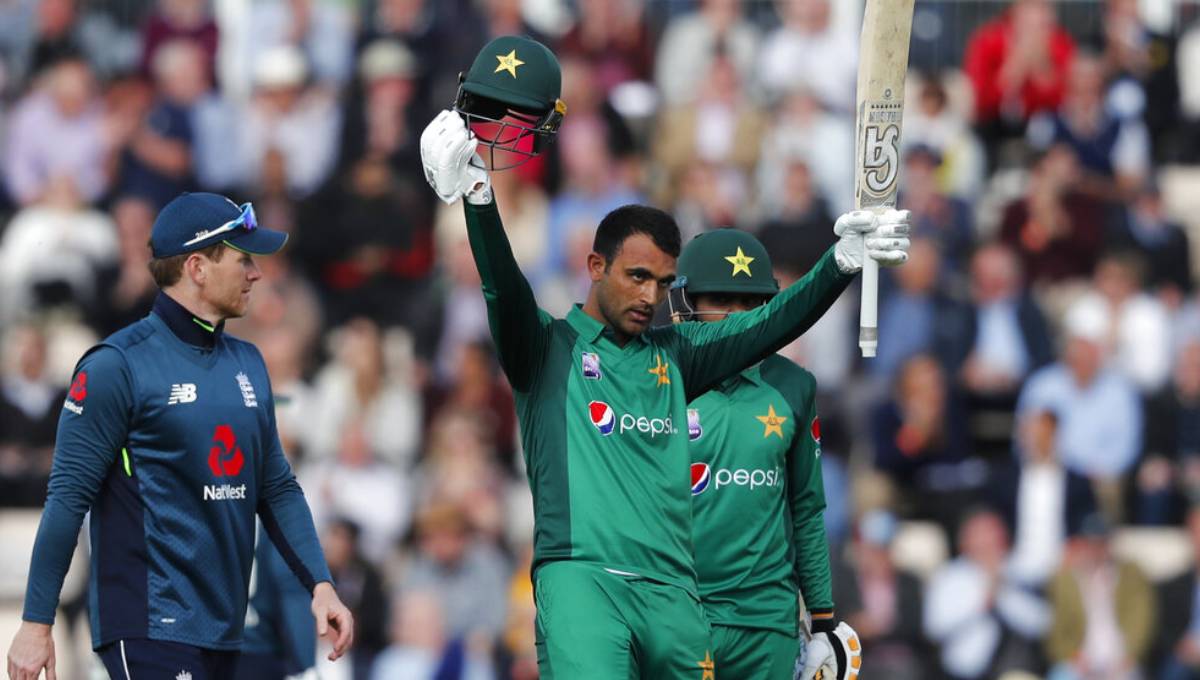 Photo: Pakistan’s Fakhar Zaman celebrates scoring a century as England’s captain Eoin Morgan, left, looks on during the second One Day International cricket match between England and Pakistan at The Ageas Bowl in Southampton, England Saturday, May 11, 2019.

England, May 12 : Pakistan’s run chase faltered in the last over as England clinched a 12-run victory in the second one-day international on Saturday ahead of the Cricket World Cup.

England’s heavyweight hitter Jos Buttler reached his eighth ODI century in just 50 balls and finished on 110 not out after Pakistan chose to bowl.

David Willey replaced possible World Cup choice Joffra Archer as England rotated resources and the Yorkshire paceman’s tight death bowling helped see the hosts home, giving them a 1-0 lead in the five-match series after a no-result in the opener due to rain.

Former Pakistan Navy officer Fakhar Zaman blasted 138 in 106 balls only to be dismissed on review, Chris Woakes’ out-swinger catching the toe of his bat for Buttler to hold behind, but his contribution was in a losing cause.

Morgan fired an unbeaten 71 of his own at the Rose Bowl.

England has now passed 300 runs in ODIs 35 times since the 2015 World Cup — compared with 34 times in its entire previous history.

Jonny Bairstow scored 51 and Jason Roy plundered 87 but could not turn that 13th half century into a three-figure knock.

For Pakistan, Babar Azam hit 51 before being caught and bowled by Adil Rashid.

Asif Ali drove straight at Ben Stokes on the boundary off Willey’s bowling to depart on 51.

Captain Sarfaraz Ahmed wound up stranded on an unbeaten 41, with Hasan Ali four not out, as England ground out the result.