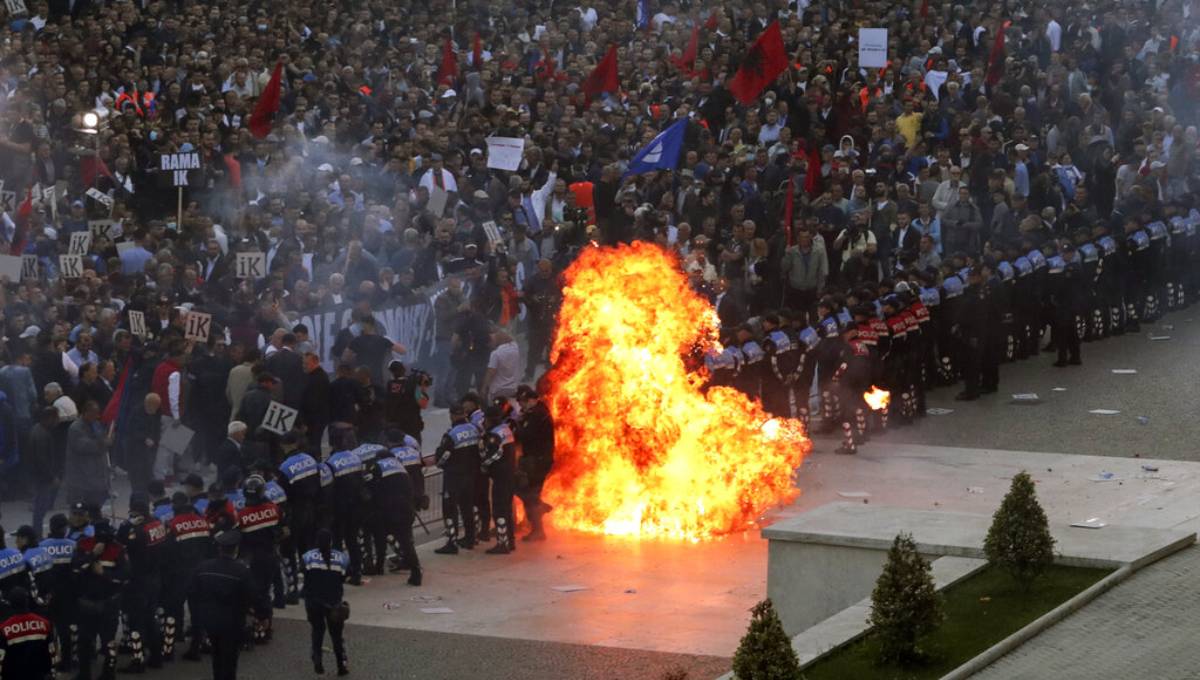 Photo: Flames from a petrol bomb thrown toward a police line blocking protesters taking part in an anti-government rally in Tirana, Saturday, May 11, 2019. Protesters demand the Socialist government to resign and call an early parliamentary election.

Albania, May 12 : Thousands of supporters of the Albania’s center-right opposition protested in Tirana Saturday, calling for the left-wing government to resign and for an early parliamentary election. The protesters clashed with police at several points and reporters saw some people injured.

The protest began in front of the main government building at Tirana’s Martyrs of the Nation Boulevard. Flares, firecrackers, Molotov cocktails and other projectiles were thrown. Police used tear gas when a group of protesters broke the police cordon and headed for the building’s entrance.

After two hours, clashes moved to the parliament building.

Ambulances were seen taking injured protesters away but there was no immediate information on numbers of casualties.

Clashes continued there too.

It was not clear how long the protests would last. Minor clashes continued with some protesters throwing Molotov bombs and projectiles while police responding with tear gas and water cannons. Masked teenagers were seen setting fires in trash cans on the streets.

President Ilir Meta called on protesters “to avoid acts of violence and confrontation.”

Lleshaj and Prime Minister Edi Rama both denounced the violence and expressed their support to police forces, deploring their injuries.

The opposition accuses Rama’s Cabinet of being corrupt and linked to organized crime, which the government denies.

Basha called on his supporters to continue the protest until Rama resigns and a transitional cabinet is formed to take the country to an early election.

“We are determined there will be … no election with Edi Rama,” Basha said.

Rama tweeted that he considered the protest violence as “sadness” adding that “Albania is damaged.”

The U.S. Embassy in Tirana condemned protesters’ violence calling for it to stop.

“Protest leaders have a responsibility to encourage calm. We call on all parties to show restraint,” a statement said.

The Organization for Security and Co-operation in Europe said “violence is not the answer. Also, heavy response to violence will not help.”

Opposition lawmakers relinquished their seats in parliament in protest, though many have now been filled by other opposition candidates. The governing Socialists have 74 seats in the 140-seat parliament.

In June, Albania expects an answer from the European Union on whether full membership negotiations will be launched, and also holds municipal elections.

The protest is the fourth national demonstration since mid-February. Regular, smaller ones are held weekly across the country.