Killers, money-launderers must be punished: PM 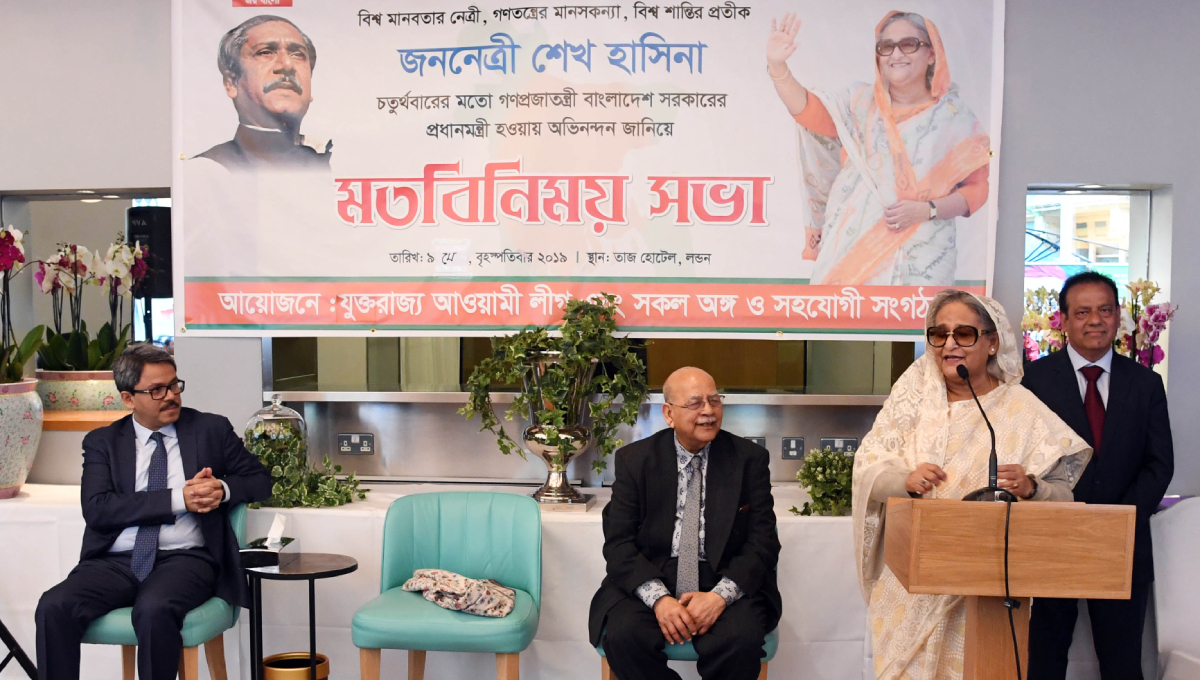 Prime Minister Sheikh Hasina speaks at a views-exchange meeting at Taj Hotel in London on Thursday, May 9, 2019. Photo: Courtesy

London, May 9 : In a veiled attack on BNP acting chairman Tarique Rahman, Prime Minister Sheikh Hasina on Thursday said the killers and money-launderers must be punished.

“There’s no mercy to the killers and money-launderers. The nation won’t forgive them, no matter where they hide in and whatever amount of money they spend,” she said in a views-exchange meeting at Taj Hotel here.

The Prime Minister said courts have delivered verdicts against the killers and money-launderers. “We’ll take measures so that the verdicts are executed, no matter what slogans they shout and what abusive words they use…they must be punished,” she said.

Sheikh Hasina, also the chief of the ruling Awami League, said the government has tried the killers of Bangabandhu and war criminals defying all the odds and obstacles.
Tarique Rahman went to London in 2008 for treatment after his release from jail on parole. Since then, he has been living there.

The BNP leader faces over a dozen of cases and he has been convicted in five of these, including the 10-truck arms-haul, August 21 grenade attack, Zia Orphanage and Zia Charitable trust graft cases.

Turning to the December-30 election, the Prime Minister said ruling Awami League achieved a landslide victory in the polls due to the country’s tremendous development over the last 10 years.

About the construction of the much-awaited Padma Bridge, Sheikh Hasina said the government is building the bridge with its own funds. “Two kms out of 6.5 kms of the bridge are now visible.”

The Prime Minister firmly said she will not take the responsibility of false blame and she knows that people love the truth. “I also know the path of truth is tough and I’ve come to this stage choosing this way.”

Pointing at BNP’s false propaganda against the government, the Prime Minister said those who were born through falsehood and in an illegal way see everything as illegal.

“Trading with lies is a one of BNP’s characters and they’ve amassed huge wealth by embezzling orphans’ money and siphoning off money abroad,” she said adding, “I believe in a word that the victory of the truth is a must.”

Pointing out the reasons behind BNP’s debacle in the general election, the Prime Minister said the party did not take the polls as a competition; rather it took it as a scope of ‘nomination trade’. “They gave nominations to a number of candidates in a single seat and sidelined the prospective ones,” she said.

The Awami League chief said women and young people voted for her party massively that helped it secure a landslide victory in the polls.

Highlighting the country’s tremendous socioeconomic development over the last 10 years, she said her government is working hard to fulfill people’s basic needs.

Hasina said the government has been able to bring down the poverty rate to 21 percent from 41 percent. “The country expects 8.13 percent GDP growth in the current fiscal year due to various pragmatic steps of our government.”

BD to be among top 20 contributors to global GDP growth: Kamal