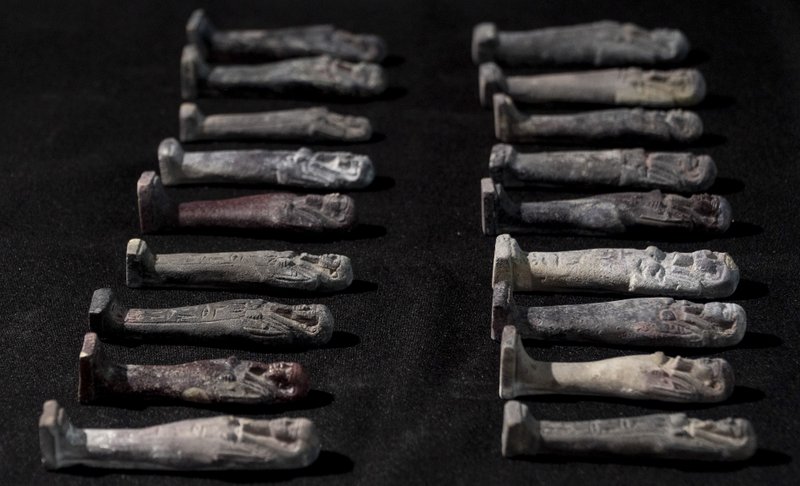 Photo: Recovered Shabits, mummy-liked statues, are presented to the media by the National Museum during a news conference in Rio de Janeiro, Brazil, Tuesday, May 7, 2019.

Rio De Janeiro, May 8 : Brazil’s national museum said Tuesday it has recovered 200 pieces from its Egypt collection after a devastating fire last September. The collection had 700 pieces and was the largest in Latin America before the blaze.

The artifacts recovered include statues, vases and amulets that had been buried inside the casket of a mummy and hadn’t seen the light of day since the mummy was buried around 750 B.C.

Museum director Alexander Kellner told reporters the museum’s recovery effort is being conducted with funds provided by the German government, an online money-raising campaign and an allocation from the previous Brazilian government. He said the new administration of President Jair Bolsonaro hasn’t allocated any money for the museum and recovery efforts will soon run out of funding.

“Look, all this is going to end, there is no way we can continue,” Kellner said.

The national museum depends on funding from the Ministry of Education and Kellner said they have not been able to make direct contact with ministry officials.

“We need to have direct contact with the minister,” he said. “Without the Education Ministry, we won’t have another national museum.”

The ministry didn’t respond immediately to requests for comment.

The museum was running on a fraction of the budget that officials said they needed when the fire ravaged most of its contents. From 2015 to 2017, the museum spent only $4,000 on safety equipment, according to a nonprofit group that tracks public spending.

In total, the museum has recovered just 2,700 artifacts out of the more than 20 million it held before the fire, officials said.

An investigation found the fire was caused by an air conditioner that was installed incorrectly.