Trump threatens to hike tariffs on $200B of Chinese imports 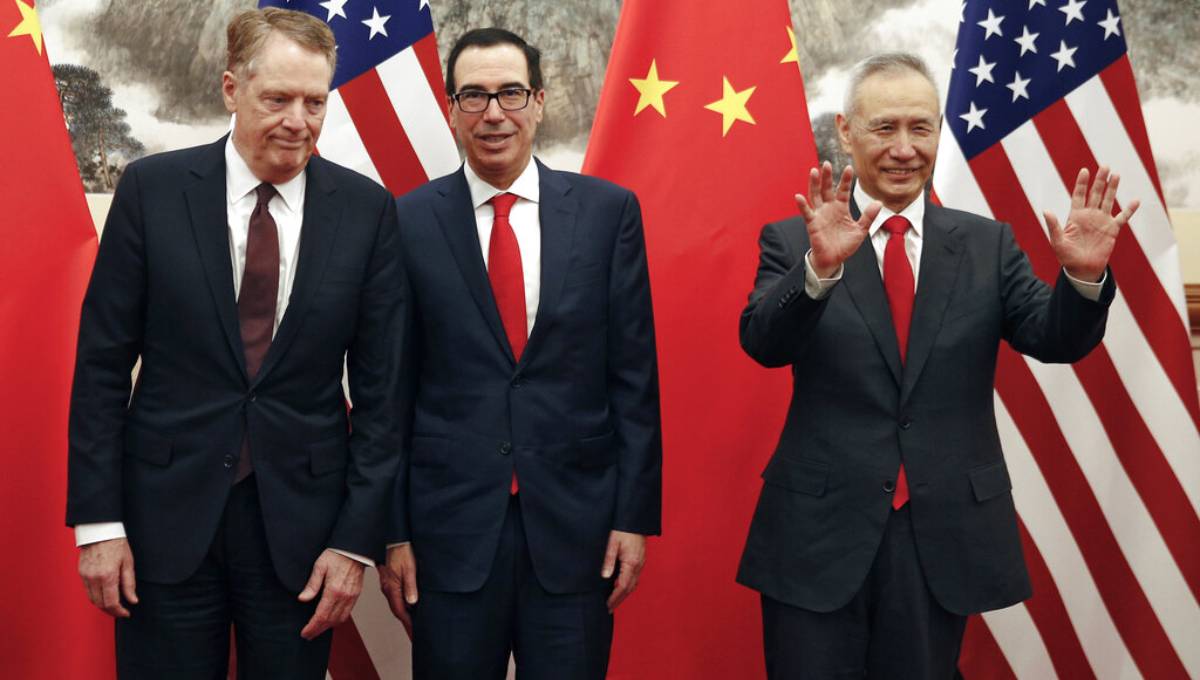 Photo: In this file photo taken Wednesday, May 1, 2019, Chinese Vice Premier Liu He, right, gestures as U.S. Treasury Secretary Steven Mnuchin, center, chats with his Trade Representative Robert Lighthizer, left, before they proceed to their meeting at the Diaoyutai State Guesthouse in Beijing.

Washington, May 6 : President Donald Trump turned up the pressure on China on Sunday, threatening to hike tariffs on $200 billion worth of Chinese goods.

Trump’s comments, delivered on Twitter, came as a Chinese delegation was scheduled to resume talks in Washington on Wednesday aimed at resolving a trade war that has shaken financial markets and cast gloom over the world economy.

Trump turned up the heat by saying he would raise import taxes on $200 billion in Chinese products to 25% from 10% on Friday.

Trump had twice pushed back deadlines — in January and March — to raise the tariffs in a bid to buy more time for a negotiated settlement. But on Sunday, Trump, who has called himself a “tariff man,” said he’s losing patience. “The Trade Deal with China continues, but too slowly, as they attempt to renegotiate. No!” Trump tweeted.

In his tweets, Trump also threatened to slap tariffs on another $325 billion in Chinese imports, covering everything China ships annually to the United States.

The two countries are locked in a high-stakes dispute over China’s push to establish itself as a technological super power. The U.S. charges that China is resorting to predatory tactics — including cybertheft and forcing foreign companies to hand over technology — in a drive to establish Chinese companies as world leaders in advanced industries such as robotics and electric vehicles.

The administration has repeatedly suggested that the negotiators are making progress. A month ago, Trump said that the two countries were “rounding the turn” and predicted that “something monumental” would be achieved in the next few weeks.

But last week, Treasury Secretary Steven Mnuchin seemed to temper expectations, suggesting that Washington was willing to “move on” if it can’t get the deal it wants.

A substantive deal would require China to rethink the way it pursues its economic ambitions, abandoning or scaling back subsidies to its companies, easing up on the pressure for foreign companies to share trade secrets, and giving them more access to the Chinese market.

Philip Levy, senior fellow at the Chicago Council on Global Affairs and a White House economist under President George W. Bush, said the talks are too complicated for Trump’s high-pressure tactics to work. “The president treats this like we’re haggling over the price of a used car,” Levy said.

Trump has made a priority of shaking up American trade policy.

As a candidate for the presidency, Trump raged repeatedly about alleged Chinese perfidy — so much so that a video mashup of him spitting out the word “China” went viral and collected more than 15 million views on Youtube.com.

Trump charged that previous administrations, gullible and weak, had let China get away with abusive trade practices, accepting empty promises from Beijing and allowing the U.S.-China economic relationship to grow ever more lopsided. As evidence, he pointed to America’s vast U.S. trade deficit with China — $379 billion last year, by far the biggest with any country in the world.

Once he took office, Trump’s relationship with his Chinese counterpart, Xi Jinping, seemed to get off to a good start. The two men shared chocolate cake and amiable conversation at Trump’s resort in Mar-a-Lago, Florida, in April 2017. A few weeks later, China agreed to open its market U.S. beef, cooked chicken, and natural gas in what Commerce Secretary Wilbur Ross called a “herculean accomplishment.”

The romance faded. In March 2018, the Office of the U.S. Trade Representative issued a report accusing China of using predatory tactics to strengthen its tech companies.

Last July, the Trump administration gradually began slapping import taxes on Chinese goods to pressure Beijing into changing its policies. It now has imposed 10% tariffs on $200 billion in Chinese imports and 25% tariffs on another $50 billion. The Chinese have retaliated by targeting $110 billion in U.S. imports.

The fight between the world’s two biggest economies is raising worries about global economic growth. The International Monetary Fund, the World Bank, and others have downgraded their forecasts for the world economy, saying the U.S.-China standoff is reducing world trade and creating uncertainty for companies trying to decide where to buy supplies, build factories, and make investments.

Trump has portrayed his tariffs as a moneymaker for the United States and a benefit to the U.S. economy.

But a March study by economists from the Federal Reserve Bank of New York, Columbia University, and Princeton University found that the burden of Trump’s tariffs – including taxes on steel, aluminum, solar panels, and Chinese imports – falls entirely on U.S. consumers and businesses who buy imported products. By the end of last year, the study found, they were paying $3 billion a month in higher taxes and absorbing $1.4 billion a month in lost efficiency.

Nonetheless, the overall U.S. economy has remained healthy. On Friday, the government reported that the U.S. unemployment rate had fallen to the lowest level in half a century.

The prospect of higher tariffs and heightened tensions could alarm investors when markets open Monday. “When the president puts his foot down, it makes the market go down,” Chris Rupkey, chief financial economist at MUFG Union Bank, wrote in a research note Sunday. “Tariff man is back just in time to make the stock market dive, dive, dive.”

Rajshahi board on top, Sylhet at bottom again

Anti-vaxxers ‘have blood on their hands,’ says UK health secretary