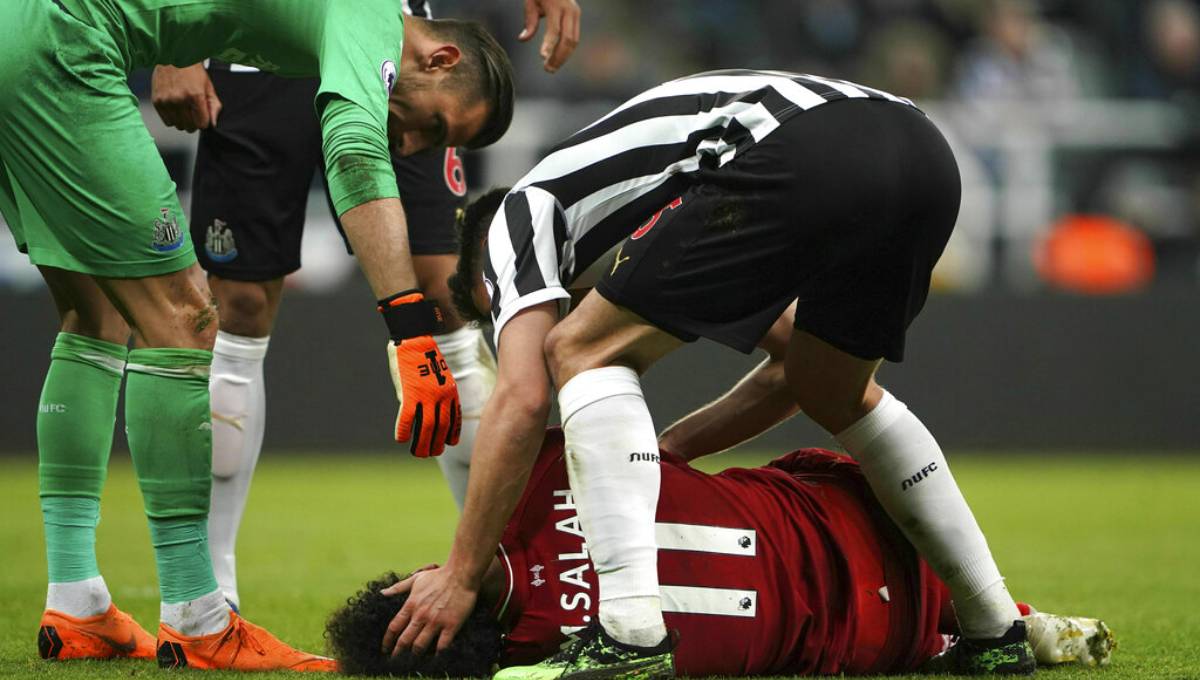 England, May 5 : Liverpool overcame the loss of Mohamed Salah to a heavy knock to the head to beat Newcastle 3-2 thanks to a late goal by Divock Origi and return to the top of the English Premier League on Saturday.

Origi’s header at an 86th-minute free kick glanced off the top of Newcastle defender Jamaal Lascelles’ head and into the net as Liverpool collected an eighth straight league win, which put the team on 94 points, two clear of Manchester City.

That points total would have won the Premier League in all but two seasons since its inaugural year in 1992-93.

However, City remains the favorite. The champions play Leicester on Monday in their game in hand and then at Brighton on the final day. They will retain the title by winning their last two matches.

Salah appeared to be in tears when he was carried off the field on a stretcher in the 73rd minute after smashing his head against the ground following a collision with Newcastle goalkeeper Martin Dubravka. Klopp said Salah took a “proper knock to the head” but was “OK,” and watched the end of the game from the locker room.

It is unclear if Salah will be available on Tuesday for the second leg of the Champions League semifinal against Barcelona, which leads 3-0 from the first match.

Salah, with his league-leading 22nd goal, put Liverpool in the lead for the second time in a thrilling game at St. James’ Park off a right-wing cross from Trent Alexander-Arnold, who was the center of attention in the first half.

Having also set up Virgil van Dijk for Liverpool’s opener in the 13th minute, Alexander-Arnold blocked the ball on his own goal line with his elbow moments before Christian Atsu equalized in the 20th minute. The referee could have chosen to award a penalty and send off Alexander-Arnold, but the right back stayed on the field and wound up assisting Salah for his goal eight minutes later.

Salomon Rondon equalized in the 54th for Newcastle, but Liverpool — playing just 72 hours after losing to Barcelona at the Camp Nou Stadium — showed its fighting qualities to eke out a win that keeps the pressure on City.

“The lads showed the spirit once again. They have showed it the whole season,” Alexander-Arnold said. “Many times we have been down and out but equalized late on, or scored a late (winning) goal.

“It was important to put the pressure back on City and hopefully Leicester will be able to do something for us on Monday night.”

Liverpool is seeking its first top-flight title since 1990, and 19th in total.

Before its final league game at home to Wolves a week on Sunday, Liverpool will attempt to overturn the deficit against Barcelona in the Champions League on Tuesday.

Salah carried off on a stretcher after knock to head