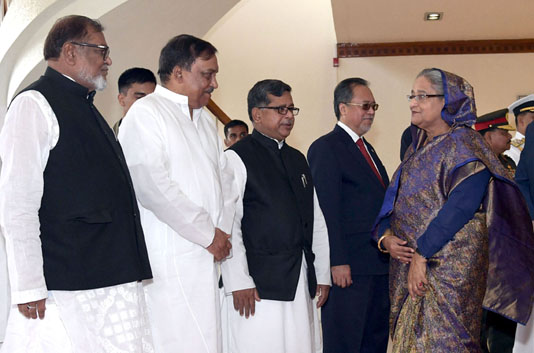 Prime Minister Sheikh Hasina left Dhaka for London on Wednesday morning on an official visit to the United Kingdom (UK).
A VVIP flight of Biman Bangladesh Airlines carrying the prime minister and her entourage members took off from Hazrat Shahjalal International Airport in the capital for the British capital of London around 9.15am.

Among others, Liberation War Affairs Minister AKM Mozammel Haque, Home Minister Asaduzzaman Khan, State Minister for Civil Aviation and Tourism Md Mahbub Ali, chiefs of the three services, dean of the diplomatic corps and high civil and military officials were present at the airport to see the premier off.The flight is scheduled to reach the Heathrow International Airport in London at 3:55pm local time.

Bangladesh High Commissioner to the UK Saida Muna Tasneem will receive the prime minister at the airport.