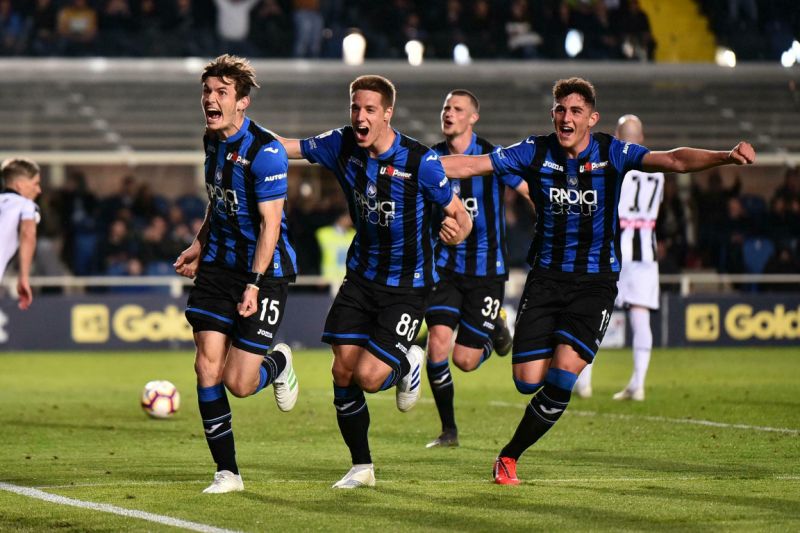 Photo: Atalanta’s Marten De Roon, left, celebrates with his teammates after scoring from the penalty spot his side’s opening goal during the Serie A soccer match between Atalanta and Udinese at the Atleti Azzurri d’Italia stadium in Bergamo, Italy, Monday, April 29, 2019.

Milan, Apr 30 : Atalanta continued its fantastic season as it produced two late goals to beat relegation-threatened Udinese 2-0 and move into the top four in Serie A on Monday.

The result came days after it booked a place in the Italian Cup final.

Atalanta moved into the final Champions League berth, a point above fifth-placed Roma and three above Torino and AC Milan.

There are four rounds remaining.

“The guys were extraordinary; let’s not forget that it’s the third victory out of three, including the Italian Cup,” Atalanta coach Gian Piero Gasperini said.

“Maybe it was the two points lost in the 0-0 draw at Empoli two Mondays ago that gave us the impetus for the hat trick.”

Rodrigo de Paul hit the post for Udinese and visiting goalkeeper Juan Musso pulled off a number of fine saves to deny Atalanta.

Fiorentina’s miserable form continued as it lost at home to Sassuolo 1-0.

Domenico Berardi scored in the first half and Fiorentina midfielder Jordan Veretout had a penalty saved by Andrea Consigli minutes later.

Sassuolo dominated and Merih Demiral thought he doubled their lead but, after a lengthy wait, it was ruled out on video review for offside.

Fiorentina has won just one of its past 15 matches in all competitions, dating to the beginning of February.

Robotics startup that made cute toy Cozmo shuts down