No Madrid, no Ronaldo: Fresh feel for Champions League semis 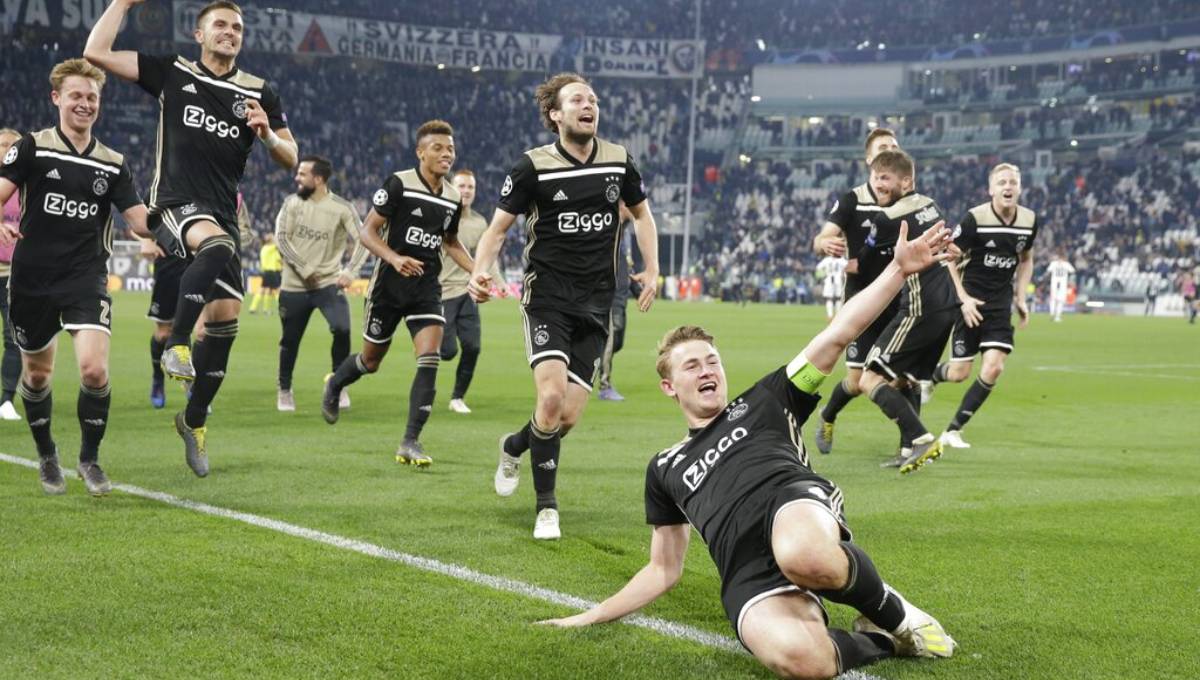 Photo: Ajax’s Matthijs de Ligt and teammates celebrate at the end of the Champions League, quarterfinal, second leg soccer match between Juventus and Ajax, at the Allianz stadium in Turin, Italy, Tuesday, April 16, 2019. Ajax won 2-1 and advances to the semifinal on a 3-2 aggregate.

England, Apr 29 : There’s a fresh feel to the lineup for the Champions League semifinals this season, even if it contains some of the most storied teams and recognized players in Europe.

This time there’s no Real Madrid, the three-time defending champion and Europe’s dominant team of this generation.

There’s no Cristiano Ronaldo, the superstar forward who has virtually made this competition his own in recent years.

Instead, the survivors this year in the biggest club competition in world soccer are a surprise package from England, a blast from the past from the Netherlands, and two more aristocrats of the European game looking to end lean spells in the Champions League — by their lofty standards, anyway.

Few could have foreseen one of the semifinal matchups being Tottenham vs. Ajax.

Tottenham hasn’t bought a player in the last two transfer windows, needed a last-gasp draw at Barcelona’s Camp Nou to get out of its group, and has beaten Borussia Dortmund and Manchester City to reach its first European Cup semifinal in 57 years.

Hailing from the largely ignored Dutch league, Ajax is back in the semis for the first time since 1997 and seeking a fifth European Cup title — and first since 1995. Much like Monaco two seasons ago, Ajax has emerged from nowhere to stun some of the top teams on the continent, its youth-filled team beating Madrid and Juventus — Ronaldo’s past and present teams — in the knockout stage.

The other semifinal is just as intriguing and features teams expected to get this far.

However, it remains something of a mystery as to why Barcelona — led by Lionel Messi — has only made it to the last four once in the previous five years. That was in 2015, the year it won the title for the fifth time.

Liverpool is also a five-time European champion and a power again in the English Premier League under Juergen Klopp. It is a second straight year in the semifinals for a team that has such a special relationship with this competition, yet before last season its most recent last-four appearance was in 2007.

There has been a sharp contrast in the build-up to the game for the two teams.

Ajax’s players had their feet up at the weekend after all fixtures in the Dutch top flight were canceled in an effort to help the team stay fresh for the semifinal. The Amsterdam club will go into the first leg on Tuesday on the back of a seven-day rest.

As for Tottenham, manager Mauricio Pochettino played a close-to-full-strength team in a 1-0 defeat against West Ham in the Premier League on Saturday, with injuries limiting his ability to rotate amid a grueling schedule of games every three or four days. Spurs have yet to seal a top-four finish in the league, which guarantees a return to the Champions League next season.

Tottenham heads into the first leg at its newly built 1 billion-pound stadium with striker Harry Kane, midfielder Harry Winks and winger Erik Lamela among those injured, forward Heung-min Son suspended, and a big doubt over the fitness of increasingly influential midfielder Moussa Sissoko.

“We are competing with circumstances that are not the best,” Pochettino said.

Ajax beat both Madrid and Juventus away in the knockout stage.

Ajax and Tottenham last met in European competition in 1981, in the first round of the European Cup Winners’ Cup, with Tottenham winning.

The matches will see Luis Suarez and Philippe Coutinho come up against Liverpool, where they were stars before joining Barcelona.

Suarez played four seasons in England before making the move to Spain in 2014, while Coutinho spent six seasons with Liverpool before a high-profile and drawn-out transfer to the Spanish powerhouse last year.

While Suarez has thrived with Barcelona after leaving Liverpool, becoming the perfect foil for Lionel Messi in attack, Coutinho is yet to show the same form that made him a key player for the English club. The Brazil playmaker hasn’t been a regular starter for Barcelona and has been jeered occasionally by parts of the crowd at Camp Nou Stadium.

Barcelona has no fresh injuries to report following a weekend in which it won the Spanish league for the 26th time.

Liverpool is locked in a title race in the Premier League, one point behind Man City with two games to go. That means Klopp hasn’t been able to rest players — unlike his counterpart at Barca, Ernesto Valverde — and he played a virtually full-strength team on Friday in a 5-0 win over Huddersfield.

Roberto Firmino missed that game with a groin injury and the Brazil striker remains a doubt for the first leg against Barcelona on Wednesday.

Liverpool and Barcelona last met in the Champions League in 2007, with Liverpool advancing on away goals in the Round of 16. Liverpool has won all three of the teams’ two-legged European encounters.