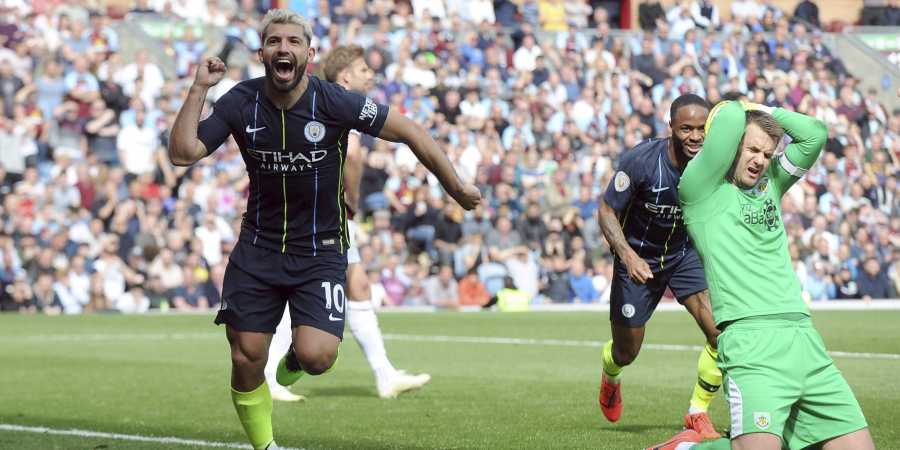 Manchester City remain in control of the Premier League title race as the finest of margins earned Pep Guardiola’s men a 1-0 win at Burnley on Sunday.
Sergio Aguero’s 31st goal of the season crossed the line by millimetres before being hacked clear by Matthew Lowton, but goal-line technology awarded the goal and kept City a point clear of Liverpool with two games left for both sides to play.

For the first time in months, City’s elimination from the Champions League means they will crucially have a free midweek to prepare for their final two games at home to Leicester next Monday and away to Brighton on the final day of the season.Liverpool must travel to Newcastle next weekend, either side of the two legs of their Champions League semi-final against Barcelona, before hosting Wolves on May 12th.

City have now won 12 consecutive Premier League games and were worthy winners for a dominant second-half display after a lacklustre first 45 minutes.

Tom Heaton made a series of saves, most notably from Aguero and Bernardo Silva, while the visitors also had strong claims for a penalty waved away for a handball by Ashley Barnes.

However, City finally bagged the breakthrough just after the hour mark when Aguero fought for possession inside the area and despite Lowton getting a touch on his effort, the ball crossed the line before the full-back could clear.

Goal-line technology then came to Burnley’s rescue to deny Gabriel Jesus a second for City, but the champions just needed the one goal to edge closer towards retaining their title.