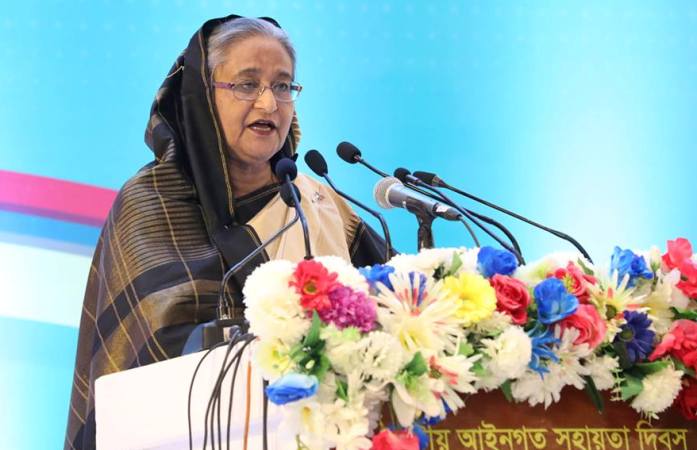 Prime Minister Sheikh Hasina on Sunday asked authorities concerned to dispose of the cases involving rapes and arson causing deaths to expose the culprits to stern punitive actions in soonest possible time.
“Now, it is being seen that the rape, murder, arson attack, and killing people by setting fire are going on due to social degradation,” she said while opening the National Legal Aid Services Day, 2019 at a hotel in the capital.

The premier asked the authorities concerned to take immediate measures for speedy trial of the cases and ensure tougher punishment to the people involved in the misdeeds as the country as well as the nation want to get relief of the social menace.She issued directives against the backdrop of recently killing a Feni Madrasha student Nusrat Jahan Rafi by setting her on fire and multiple incidents of rape, murder, and arson attacks across the country.

The prime minister asked the law ministry to take appropriate actions in disposing of the long pending cases as many people are currently languishing in jails without knowing their faults and reasons to stay in the prison, saying, “They even don’t know how to get legal aid services.”

She said her government wants each of the people get justice and asked the authorities concerned to take measures to this end.

Referring to her own past experience, the premier said: “I don’t want anyone like us to cry without getting justice”, adding that “The then government had passed indemnity ordinance as we could not want justice for killing my father, mother and brothers (on August 15 in 1975).”

“I even couldn’t file a case over the matter,” she said.

After assuming office in 1996, the Awami League annulled the ordinance and filed the assassination case of Father of the Nation Bangabandhu Sheikh Mujibur Rahman, she mentioned.“Despite being demand of trial of the case in the special tribunal, I sent it to the ordinary court for its trial as we wanted to get justice likewise the ordinary people,” she said.

The BNP-Jamaat had announced hartal on the day of delivering the verdict in the case, she continued.

Two people, a woman from Manikganj and a youth from Cumilla, who got the legal aid services from NALSO free of cost, narrated how they got relieve from civil cases, for which they fought legal battle for long five years, through the Alternative Dispute Resolution (ADR) system at the quickest possible time.

Both of them thanked the premier for taking such measures to mitigate the sufferings of the litigants.