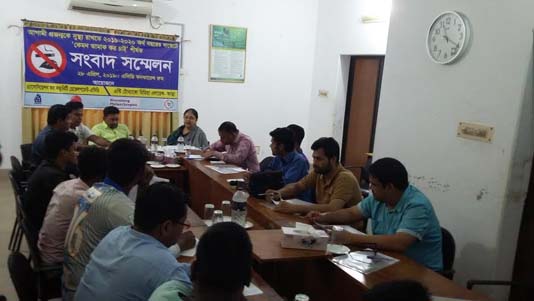 Anti-tobacco campaigners and academics here today demanded that the government impose higher tax on tobacco products — both smoking and smokeless — to increase the prices so that people are discouraged from using them.
They also demanded reducing the price category of cigarette from four to two, merging the price categories of bidi (locally made cigarette) into one, and imposing supplementary duty on all kinds of tobacco products, including jorda and gul.

They put forward the demands at a press conference jointly organised by Association for Community Development (ACD) and regional committee of Anti Tobacco Media Alliance (ATMA) at ACD conference hall.Dr Wasim Mezbahul Haque, a professor and Head of Department of Economics at Rajshahi College, said if tax is increased on tobacco products, the government will be able to earn substantial revenue. At the same time, usage of tobacco and deaths caused by it will reduce significantly.

He also said the current price structure of cigarettes is very complex as it has four categories — low, medium, high and premium — which should be reduced to two, low and high.

“Having many categories make the tax process more complex, creating a scope for tobacco companies to evade the duty. No country has so many categories like us,” said Prof Haque.

Salima Sarwar, Executive Director of ACD, said the negative impacts of tobacco on public health as well as economy have been established, so the government should take strict measures like imposing higher tax to reduce its usage.

How to stop third-party apps from scanning your Gmail inbox

Australia wants all to benefit from Bangladesh’s economic growth