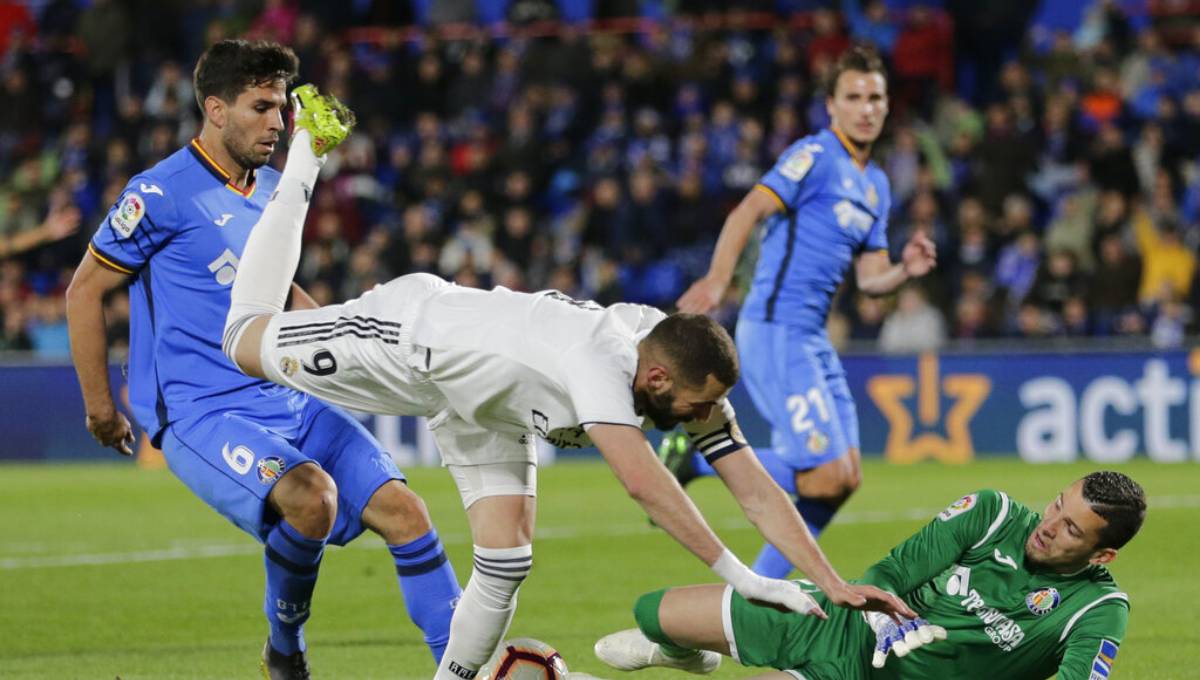 Madrid, Apr 26 : Real Madrid was held to a 0-0 draw by Getafe in the Spanish league on Thursday, putting it in danger of finishing outside of the top two in consecutive seasons for the first time in 45 years.

The draw dropped Zinedine Zidane’s team six points behind second-place Atletico Madrid, which defeated Valencia 3-2 on Wednesday to keep alive its slim hopes of catching Barcelona at the top.

Barcelona can clinch its second consecutive title — and eighth in 11 seasons — with a home win at relegation-threatened Levante on Saturday.

Real Madrid has four games left to try to surpass Atletico and avoid its second straight third-place finish in the league. It hasn’t finished outside the top two in consecutive seasons since 1973-74.

Real Madrid is yet to win an away match since Zidane returned as coach, with a loss against Valencia and draws against Leganes and Getafe. It has won all four matches at home under the former France great.

Zidane started with Toni Kroos, Luka Modric and Marcelo on the bench at the Coliseum Alfonso Perez, and Francisco “Isco” Alarcon, Keylor Navas, Federico Valverde and Brahim Diaz were among the starters.

Both teams created some significant scoring chances throughout the match but were unable to capitalize.

“We deserved more, we had chances to score,” Zidane said. “I’m upset with the result.”

The draw allowed Getafe, the biggest surprise of the season, to reclaim fourth place, the final qualification spot for the Champions League. The team from southern Madrid is unbeaten in five straight matches.

“We gained a point and we are still in the fight for fourth place,” Getafe defender Damian Suarez said. “We have to keep doing what we have been doing so far.”

Sevilla is tied with Getafe on points but behind in the head-to-head tiebreaker. Six-place Valencia is three points back from Getafe and Sevilla.

Rayo, which has won only one of its last 13 matches, is now seven points from Valladolid, the first team outside the relegation zone.

Sevilla scored all five goals after halftime, with four coming in the first 25 minutes of the second half. Quincy Promes found the net in the 55th minute, Munir El Haddadi scored in the 57th and 62nd, Wissam Ben Yedder added to the lead in the 69th and 18-year-old Bryan Gil closed out the victory in the 86th.

“It’s getting close to the end and we are right in the middle of the fight (for the final Champions League place),” El Haddadi said.

Sevilla has won five of its seven matches under coach Joaquin Caparros, who recently announced he is fighting chronic leukemia.

Villarreal moved five points outside the relegation zone with a 1-0 win at midtable Real Sociedad.

Gerard Moreno netted the winner with a header in the 85th to give the visitors their third straight league win.

Villarreal is 14th in the 20-team standings with four matches remaining.

Amazon has posted a fourth successive quarter of record profit