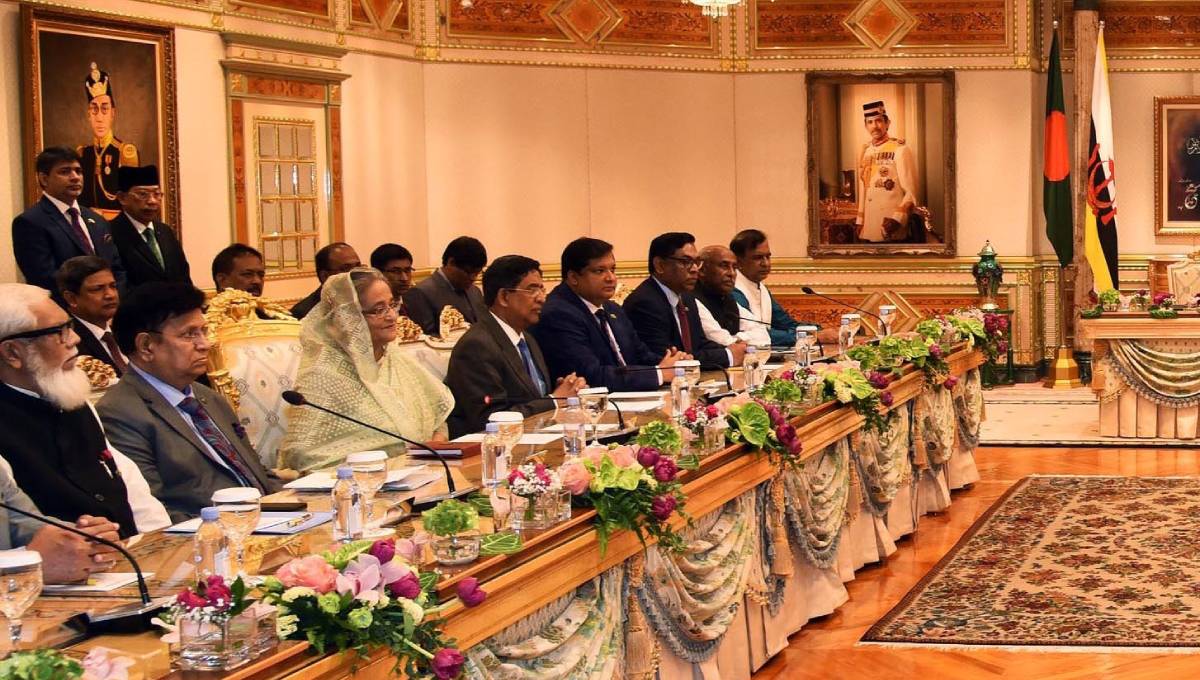 Bandar Seri Begawan, Apr 22 : Prime Minister Sheikh Hasina on Monday invited the entrepreneurs and businesspeople of Brunei to forge a partnership with the Bangladesh business community in the common journey towards growth and prosperity.

“We invite you to get a firsthand experience of developments and business opportunities in Bangladesh,” she said while speaking at the opening ceremony of Bangladesh-Brunei Business Forum at Indera Kayangan Ballroom of the Empire Hotel and Country Club here.

Sheikh Hasina said Bangladesh has one of the most liberal foreign investment regimes in South Asia as the country offers various facilities for the investors, including protection of foreign investment by law, generous tax policy, and concessionary duty on machinery import.

“We also offer 100 percent foreign equity, unrestricted exit, full repatriation of dividend and capital. We enjoy preferential access to most of the leading world markets, including the EU, Canada, and Japan,” she said.

Hasina mentioned that Bangladesh is now the second largest economy in South Asia and 41st in the world in terms of nominal GDP while its economy is moving on a solid macro-economic stability, vibrant private sector, and increasing trends in trade and investments.

This year the GDP growth is poised to hit a record 8.13 percent, after posting 7.86 percent last year, she said adding that the per capita income is set to reach this year to US$ 1,909, which is close to the middle-income threshold.

Giving credit to the private sector for this development, she said it is the main engine of the country’s economy. “We attach utmost priority to entrepreneurship and private investments, both domestic and foreign. We’re establishing 100 Special Economic Zones throughout the country. We’ve also set up a number of industrial parks to promote IT sectors.”

The success of Bangladesh’s Readymade Garment (RMG) sector is globally known and it is the second largest readymade garment exporter in the world, next to China, she said.

The Prime Minister said Bangladesh is emerging rapidly as a major global hub for quality medicines as it is exporting medicines to more than 100 countries, including the USA, the UK, Australia and Africa.

Software is yet another promising industry in Bangladesh, Hasina said adding that among 800 software and IT companies of Bangladesh, over 150 are specialised in serving overseas clients. More than 20,000 Bangladeshi IT professionals are working in various reputed IT companies all over the world, including Microsoft, Intel, IBM, Oracle and Cisco.

“With the growing environment concern all over the world, bio-degradable jute and substitute jute products from Bangladesh render huge potentials. In fact, we’ve a wide range of other quality products at very competitive prices.”

The Prime Minister said the government has been working to improve the living standard of 162 million people through accelerated economic growth with equality and robust investments in social sectors. “We’ve set clear goals to become a middle-income country by 2021 and a developed one by 2041,” she said.

The Prime Minister also invited the businesspeople of Bangladesh to invest in and do usiness with Brunei.

The top business community leaders of Bangladesh and Brunei Darussalam were present at the event.

Some business-level instruments were signed in presence of Prime Minister Sheikh Hasina at the event.

The instruments are cooperation agreement between the Federation of Bangladesh Chambers of Commerce and Industry (FBCCI) and the National Chamber of Commerce and Industry Brunei Darussalam (NCCIBD), MoU on the joint collaboration for provision of professional skills development and training in petroleum geoscience among Dimension Strata Sendirium Berhad of Brunei, Green Power Limited of Bangladesh and Department of Geology of Dhaka University, and MoU between Ghanim International Cooperation of Brunei and Nizam Group of Company of Bangladesh.