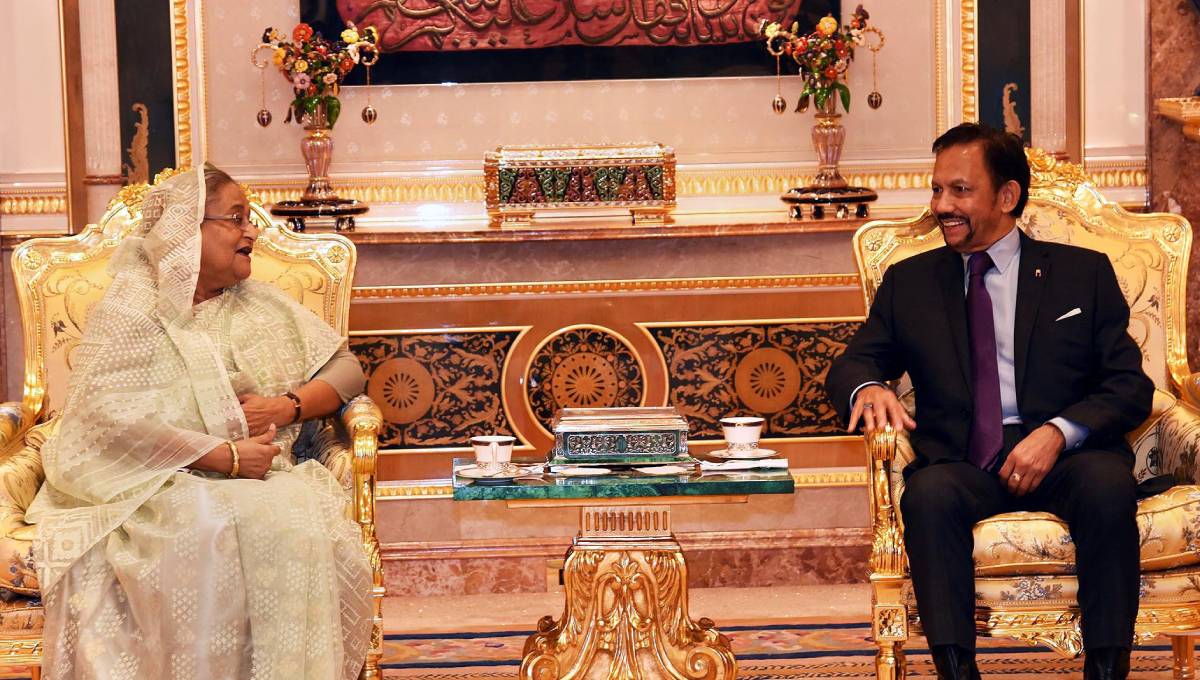 She made the proposal during her talks with Brunei Sultan Haji Hassanal Bolkiah at the Istana Nurul Iman, the official residence of the Sultan of Brunei, here.

Briefing reporters after the talks, Foreign Secretary Md Shahidul Haque said the members of the forum of the proposed regional economic forum will be Bangladesh and the Maldives from the South Asia and Indonesia, while Malaysia and Brunei from the Southeast Asia.

In response to the proposal, the Brunei Sultan assured that he will “favourably consider” the matter, the foreign secretary said.

Shahidul Haque said issues related to bilateral interests and international concerns, including Rohingya crisis, came up for discussions at the meeting.

He said the Prime Minister made some more proposals for further strengthening the bilateral ties and cooperation between Bangladesh and Brunei.

The Prime Minister proposed increasing interactions between the business communities of the two countries and conducting a feasibility study for a preferential trade arrangement to this end.

She also proposed holding discussions on constituting a joint commission between the two countries, he said.

She said the government is setting up industrial parks where the entrepreneurs of Brunei can invest.

Hasina laid emphasis on avoiding double taxation, as well as mutual promotion and protection of investment.

The Prime Minister gave priority to health and agriculture sectors in the context of Brunei and said a bigger collaboration between the two countries could be made in recruiting health professionals and pharmaceuticals.

The Foreign Secretary said both the Prime Minister and the Sultan said direct air-link between Bangladesh and Brunei should be established.

In this connection, the Sultan highly praised Bangladeshi peacekeepers for maintaining peace in the trouble-torn areas in the world.

Hassanal Bolkiah extended his heartfelt greetings to Sheikh Hasina on her party’s landslide victory in the last general election and assuming of office for the fourth time.

“It’s the verdict of people, and the victory is the recognition of socioeconomic development that Bangladesh has achieved under the Prime Minister’s leadership,” Haque quoted the Sultan as saying.

The visit of the Prime Minister is a milestone for elevation and expansion of bilateral relationship between Brunei and Bangladesh, said the Sultan adding that there is huge potentials of boosting trade and commerce between the two countries.

He said cooperation between Brunei and Bangladesh could be made in different sectors like energy, food, people-to-people contact and connectivity.

On Rohingya issue, Bolkiah put emphasis on “just and permanent solution” to the crisis.

In this connection, the Prime Minister sought Asean’s bigger involvement, and sought the Sultan’s cooperation in this regard, Haque said.

About Asean, the Sultan assured that Brunei will continue to help strengthen cooperation between Bangladesh and the regional forum.

Sheikh Hasina invited the Sultan to visit Bangladesh along with his wife.

On her arrival, the Sultan greeted Sheikh Hasina by proceeding to the stair of the Palace breaking traditional Royal protocol of Brunei.