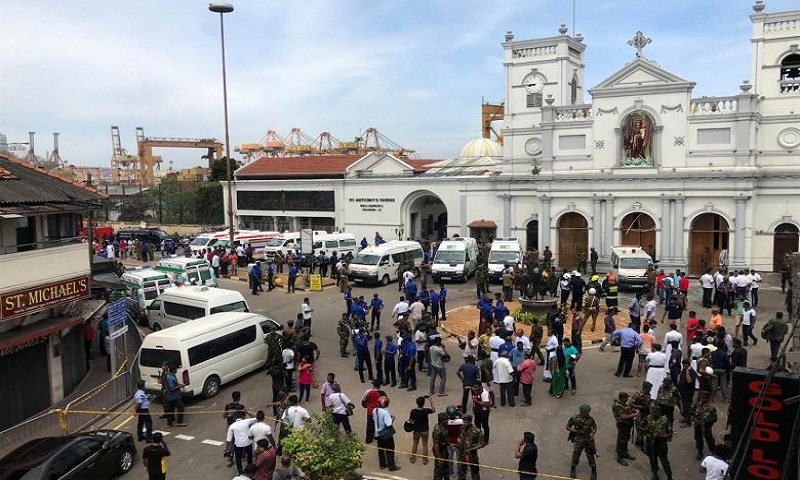 At least 156 people were killed and more than 400 injured after three Sri Lankan churches and three hotels were hit by a string of explosions on Easter Sunday (April 21), police and hospital sources said.
Police officials added that at least 35 foreigners were among the dead. A hospital source said Americans, British and Dutch citizens were among those killed in the six blasts.

Prime Minister Ranil Wickremesinghe, who condemned the “cowardly attacks”, has called for an emergency security council meeting to review the attacks that seem to be coordinated.

President Maithripala Sirisena said in an address that he was shocked by the explosions, and appealed for calm.

Sri Lanka’s police chief made a nationwide alert 10 days before Sunday’s bomb attacks that suicide bombers planned to hit “prominent churches”, according to the warning seen by AFP.

“A foreign intelligence agency has reported that the NTJ (National Thowheeth Jama’ath) is planning to carry out suicide attacks targeting prominent churches as well as the Indian high commission in Colombo,” said the alert.

The NTJ is a radical Muslim group in Sri Lanka that came to notice in 2018 when it was linked to the vandalisation of Buddhist statues.

The first explosions on Sunday were reported at St Anthony’s Church in Colombo and St Sebastian’s in the town of Negombo just outside the capital.

At least 160 people injured in the St Anthony’s blast had been admitted to the Colombo National Hospital by mid-morning, an official told AFP.

Shortly after those blasts were reported, police confirmed three high-end hotels in the capital had also been hit, along with a church in the town of Batticaloa, in the east of the country.

An official at the Batticaloa hospital told AFP more than 300 people had been admitted with injuries following the blast there.

Damage was seen at luxury hotels including the Shangri-La, Kingsbury and Cinnamon Grand. Bloomberg reported that police and emergency vehicles have blocked the entrance to the Shangri-La Hotel in Colombo, where there’s visible damage, including shattered windows, above the main entrance where a cafe is located.

There were no immediate claims of responsibility for the attacks in a country which was at war for decades with Tamil separatists until 2009. Bomb blasts in the capital were common during the conflict.