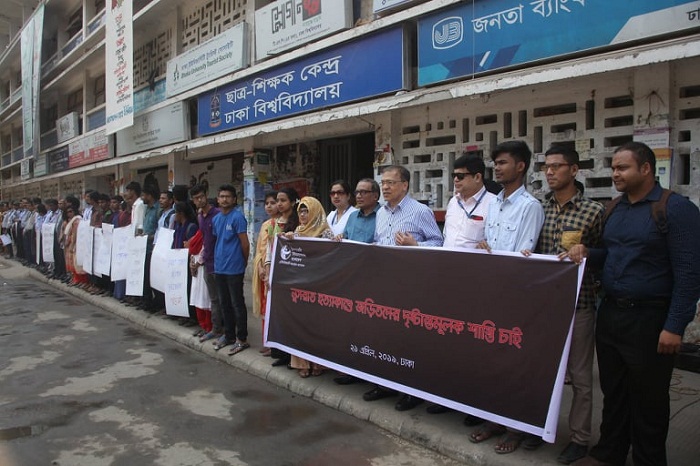 Addressing the human chain, Iftekharuzzaman said, “The government must ensure punishment of the culprits who are involved in Nusrat killing. If the government fails to ensure justice in this case, people will lose trust in the rule of law.”“Sometimes we see that law enforcers are giving shelter to the criminals instead of helping the victims. This should not happen in an independent country.”

He urged the government to bring those directly or indirectly involved in the killing of Nusrat to book.

About one hundred protesters from different schools, colleges and universities participated the human chain.

On April 6, Nusrat was set afire at an examination centre allegedly by people loyal to the principal of her madrasa after he was arrested and subsequently suspended as she had accused him of sexually harassing her in Sonagazi upazila of Feni district.

Nusrat Jahan lost her battle for life on April 10 at Dhaka Medical College Hospital in the capital.

Nusrat’s death sparked huge a outcry across the country.