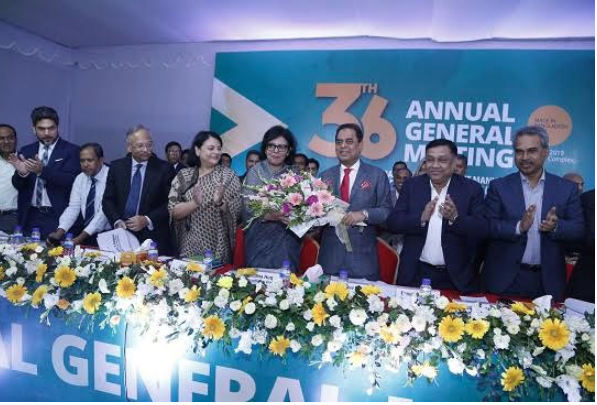 Rubana Huq took the charge of the office of BGMEA president on Saturdayas the first female business leader to steer the trade body for the next two years.
Outgoing President Md Siddiqur Rahman handed over the charge to Rubana at a ceremony at the new office of Bangladesh Garment Manufacturers and Exporters Association (BGMEA) in city’s Uttara.

Rubana, managing director of Mohammadi Group, is the first woman elected on April 6 for the position in the trade body’s history. She led the Sammilita Forum panel in the BGMEA election and won all 35 posts for directors.After taking the office, Rubana vowed to work together for the development of country’s apparel sector.

“We want to build a BGMEA platform where both big and small factories would have equal rights to develop a friendly relationship between the owners and labourers,” she added.

Rubana, wife of late Dhaka North City Corporation mayor and former BGMEA president Annisul Huq, also said she would try to highlight the successes of the apparel industry in the international arena.

In the new board of directors, Mohammad Abdus Salam will perform as first vice president while Foysal Samad as senior vice president.

Other vice presidents are S M Mannan Kochi, M A Rahim Firoz, Arshad Jamal Dipu, Mashiul Azam Sajal and A M Chowdhury Selim.The last election to BGMEA was held in 2013. The election is usually scheduled after every two years. However, it was not held in 2015 since both forum panels jointly decided to elect the board in consensus.

The outgoing president of the apex trade body, Siddiqur Rahman, served as head of BGMEA for three years and seven months.