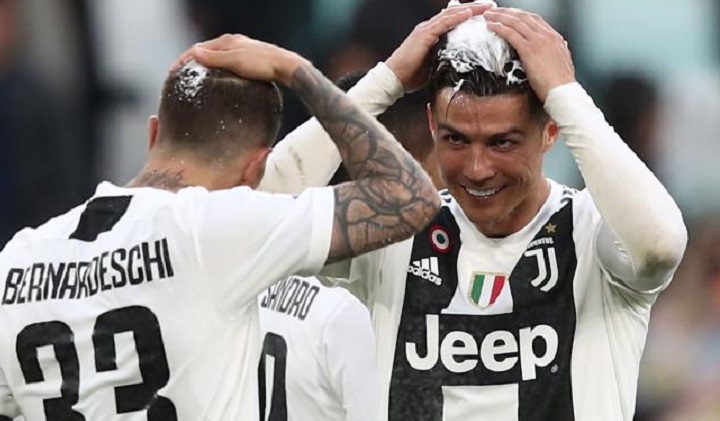 Cristiano Ronaldo said he was “1,000 percent committed to staying” with Juventus next season as he claimed his first Serie A title and Juventus their eighth in a row on Saturday.
Massimiliano Allegri’s side had needed just one more point for a 35th Scudetto and their latest title triumph helped ease some of the pain of their shock Champions League exit at the Juventus Stadium to Ajax on Tuesday.

A come-from-behind 2-1 win over Fiorentina was enough to give them a 20-point lead on nearest rivals Napoli with five games to play.Serbian defender Nikola Milenkovic put Fiorentina ahead after less than six minutes.

But Alex Sandro’s diving header on 37 minutes and an own goal from Fiorentina defender German Pezzella after a Ronaldo cross in the 53rd minute sealed another title to ease their European disappointment.

“It was a great season and I adapted well. We won the Scudetto and the Italian Super Cup, which is not easy to achieve,” said Ronaldo.

“It didn’t go well in the Champions League but next year is a new page, the fans all want it and so do we.

– Ronaldo makes history -It was the 34-year-old’s sixth domestic league title, having won three with Manchester United and two with Real Madrid, as he becomes the first player to win the Premier League, La Liga and Serie A.

He has scored 19 goals and had six assists, and is in the running for the top-scorer award along with Sampdoria’s Fabio Quagliarella, who has 22 goals, and AC Milan’s Krzysztof Piatek on 21.

Juventus have lost only two matches, against Genoa and SPAL, with 28 wins and three draws.

Their eight straight title sees them overtake French club Lyon for the record of consecutive victories in the top five European leagues.

The day was a double celebration as Juventus’ women’s team won their second straight league title since being founded in 2017.

He has six in total, having also won with AC Milan, one behind Giovanni Trapattoni, who has seven.

“We had an amazing season and we won 50 percent of the competitions we participated in.

“Of course, we are disappointed by the elimination of Tuesday but a title is celebrated.

“We won it five games from the end and that’s all about what the lads did on the pitch.”

Juventus also equalled the record for the earliest the Italian title has been won, with five games to spare, achieved by Torino in 1948, Fiorentina in 1956 and Inter Milan in 2007.

“We were greatly disappointed this week, but now it’s time to party,” said defender Giorgio Chiellini.

“The Champions League is a competition which comes down to details. You can play well for nine months and then compete in a week where things are slightly off and it’s over.

“We have to continue to progress and work, it’s the only way we know at Juventus.”

The battle for European football next season remains tight with just four points separating AC Milan in fourth and Lazio in eighth.

AC Milan were held 1-1 at Parma, with Roma, in fifth, missing a chance to move up after a 1-1 draw at Inter Milan.

Substitute Samu Castillejo had put Milan ahead after 69 minutes in Emilia-Romagna but Bruno Alves grabbed a point three minutes from time.

A Stephan El Shaarawy stunner put Roma ahead after 14 minutes at the San Siro only for Ivan Perisic to level for Inter after 61 minutes.

Inter are third six points behind Napoli who host Atalanta, in sixth, on Monday.

Lazio’s European hopes took a knock with a 2-1 defeat to relegated Chievo.

A win would have put the Romans within a point of AC Milan, but they struggled when Sergej Milinkovic-Savic was sent off after half an hour.

Emanuel Vignato, 18, scored his first goal for Chievo after 49 minutes with Perparim Hetemaj heading in a second two minutes later to seal a first away win.

Felipe Caicedo pulled a goal back for Lazio after 67 minutes but Simone Inzaghi’s side slipped to eighth behind Torino who won at Genoa with Cristian Anzaldi scoring the only goal.