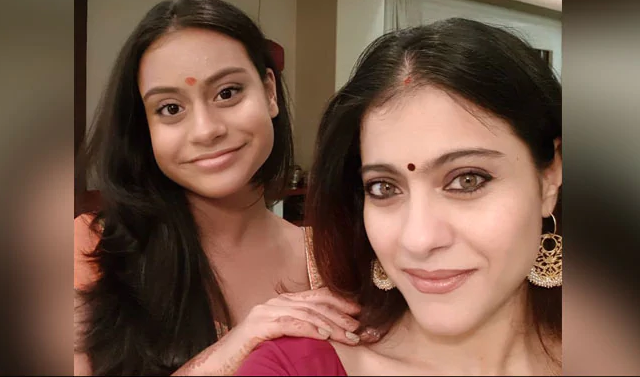 Kajol and Ajay Devgn’s daughter Nysa turned 16-years-old  and to mark her daughter’s ‘sweet 16’ Kajol posted an emotional note for her on social media. “Happy 16th birthday to my sweet, sweet baby. I still feel the weight of you in my arms and I don’t think that will ever change. However old you grow know that you will always be my heartbeat.Love, always,” Kajol wrote.

The note accompanied a picture of Kajol with Nysa from Diwali celebration at their home in 2017. Nysa is currently studying in Singapore and though little is known about her aspirations to make a career in films, both her parents have said they’ll support Nysa if she decided to become an actress.Nysa is the elder of Kajol and Ajay Devgn’s two children. Her brother Yug, 8, lives with his parents in Mumbai.

Nysa recently trended after social media trolls posted harsh comments about her choice of outfit, speaking about which Ajay Devgn told news agency PTI: “She used to get upset over trolling earlier, but now she doesn’t care about it anymore. She knows how to deal with it.

She has accepted that there will be some people who will keep judging no matter what.” He added: “Judge me, but don’t judge my kids. Kajol and I are the actors, judge us…it’s because of us, our children are under the spotlight every time.”

On the work front, Ajay Devgn is currently basking in the success of Total Dhamaal while he’s filming Tanaaji: The Unsung Warrior. He’s awaiting the release of De De Pyaar, which recently featured in headlines for the controversial casting of #MeToo accused Alok Nath.