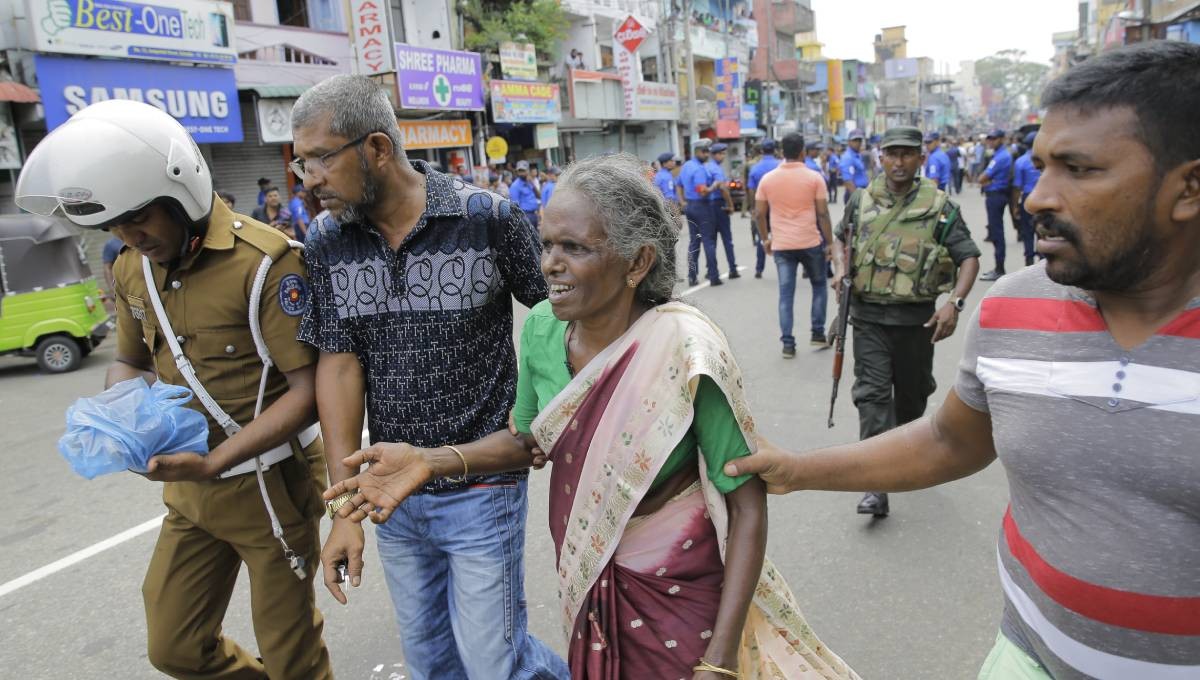 It’s the worst bout of violence in Sri Lanka since the South Asian country’s bloody civil war ended a decade ago.

Sri Lanka’s defense minister has blamed religious extremists for what he called the “unfortunate terrorist incident” involving a series of blasts at churches celebrating Easter Sunday services and luxury hotels.

Defense Minister Ruwan Wijewardena told reporters that he believed police and military forces had identified the perpetrators of the blasts that killed at least 138 people and wounded hundreds more.

He said those “involved in this unfortunate terrorist incident will be taken into custody as soon as possible.”

The archbishop of Paris and parishioners of fire-ravaged Notre Dame Cathedral are mourning the victims of the Easter Sunday attacks in Sri Lanka.

Archbishop Michel Aupetit tweeted: “Why so much hate on this day when we celebrate love? On this Easter day, we are in communion with our murdered brethren of Sri Lanka.”

A soldier and several police guarded the building. It was unclear whether the extra security was linked to the Sri Lanka attack, but parishioner Monique Pigere said “I understand why” security is needed, lamenting the “terrible” news.

In a statement, Ardern referred to the March 15 shootings at two mosques in the New Zealand city of Christchurch in which 50 died.

“New Zealand condemns all acts of terrorism and our resolve has only been strengthened by the attack on our soil,” Ardern said. “New Zealand rejects all forms of extremism and stands for freedom of religion and the right to worship safely.”

European leaders are expressing horror at the attacks on churches and hotels in Sri Lanka on Easter Sunday.

German President Frank-Walter Steinmeier wrote in a message to his Sri Lankan counterpart that he was “stunned and horrified” by the “cowardly terror attacks.” Austrian Chancellor Sebastian Kurz wrote on Twitter that he was “deeply shaken and concerned by (the) devious terrorist attacks.”

The head of the European Union’s executive Commission, Jean-Claude Juncker, said he learned of the bombings “with horror and sadness.”

Three Gulf Arab nations have condemned the Easter Sunday bombings in Sri Lanka that have killed at least 138 people.

Bahrain, Qatar and the United Arab Emirates all issued statements via their foreign ministries over the attack.

The UAE called upon “the international community to close ranks and uproot the scourge of terrorism in order to ensure international peace and security.”

Qatar said it wanted to stress its “its firm stance on rejecting violence and terrorism.”

Bahrain, meanwhile, said “these acts of terrorism are incompatible with religious principles and human and moral values.”

British Prime Minister Teresa May has condemned what she called the “truly appalling” attacks in Sri Lanka.

May said on Twitter that “The acts of violence against churches and hotels in Sri Lanka are truly appalling, and my deepest sympathies go out to all of those affected at this tragic time.”

She added, “We must stand together to make sure that no one should ever have to (practice) their faith in fear.”

Russian President Vladimir Putin has denounced a series of attacks on churches and hotels in Sri Lanka as “cruel and cynical.”

In a telegram of condolences sent to his Sri Lankan counterpart, the Russian leader said Moscow remains a “reliable partner of Sri Lanka in the fight against international terrorism.”

He added that the Russians “share the grief of the relatives of those killed and wish a quick recovery to all those who were wounded” after the Easter Sunday blasts that killed at least 138 people.

Putin voiced confidence that “the perpetrators and the masterminds of such a cruel and cynical crime committed amid the Easter festivities will take the punishment they deserve.”

The Archbishop of Colombo is calling for those responsible for the Easter Sunday blasts in Sri Lanka to be punished “mercilessly.”

Cardinal Malcolm Ranjith called on Sri Lanka’s government to launch a “very impartial strong inquiry” and to punish those found responsible “mercilessly because only animals can behave like that.”

Turkish President Recep Tayyip Erdogan has condemned the Easter Sunday attacks in Sri Lanka, calling them “an assault on all of humanity.”

In comments posted on Twitter, Erdogan offered his condolences to families of the victims and to the people of Sri Lanka.

The near simultaneous attacks against three churches and three luxury hotels killed at least 138 people, according to a security official. It was the worst violence in the South Asian country since its civil war ended a decade ago.

Turkish Foreign Minister Mevlut Cavusoglu said: “Regardless of the motive, the attack in Sri Lanka is the same as the traitorous attack in Christchurch: cowardly, barbaric and cruel.”

He was referring to last month’s attacks against two mosques in New Zealand during Friday prayers that killed 50 people.

A senior official says at least 138 people died in the blasts at three churches and three luxury hotels. Hundreds of others have been hospitalized. The violence is the worst since Sri Lanka’s bloody civil war ended a decade ago.

The official says at least two of the blasts were suspected to have been caused by suicide bombers.

Earlier, Wickremesinghe tweeted that “the government is taking immediate steps to contain the situation.”

Pakistan’s foreign ministry has condemned explosions and terrorist attacks on churches and hotels in Sri Lanka.

Ministry spokesman Mohammad Faisal said in a statement that the people and government of Pakistan stand by Sri Lanka after the Easter Sunday blasts that killed at least 138 people.

A Sri Lanka hospital spokesman says several blasts on Easter Sunday have killed at least 30 people and wounded 283 others.

A security official who spoke on condition of anonymity because he was not authorized to speak to reporters says that six near simultaneous explosions hit three churches and three hotels frequented by foreign tourists.

The official suspects at least two of the blasts were caused by suicide bombers.

The official says the explosions have caused multiple fatalities among worshippers and hotel guests.

The official says they suspect the blasts at two churches were carried out by suicide bombers.

One church, St. Anthony’s Shrine, and the three hotels are in Colombo and are frequented by foreign tourists. The other two churches are in Negombo, a Catholic majority town north of Colombo, and the eastern town of Batticaloa.

The official spoke on condition of anonymity as he was not authorized to speak with reporters.

The first blast ripped through St. Anthony’s Shrine in Colombo.

Alex Agileson who was in the vicinity says buildings in the surrounding area shook with the blast.

He says a number of injured were carried in ambulances.

A second explosion was reported at St. Sebastian’s Church in Negombo, a Catholic majority town north of Colombo.

The church has appealed for help on its Facebook page.

Sri Lankan security officials say they are checking for details.