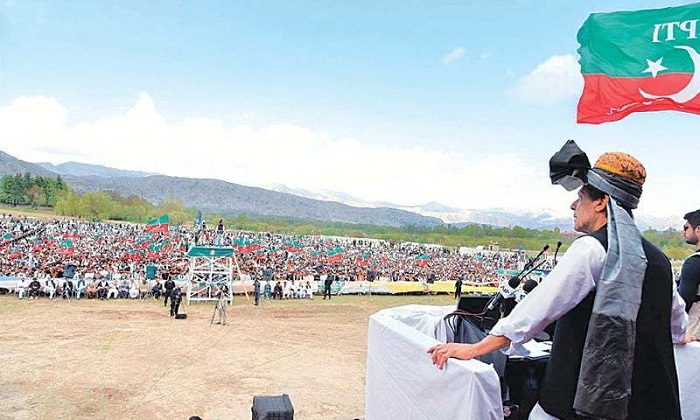 Referring to Thursday’s federal cabinet reshuffle, Prime Minis­ter Imran Khan said on Friday that a good captain constantly kept an eye on his team and sometimes had to change the batting order — replace a player with a new one — to win the match.
Addressing a public gathering in Kalaya, the headquarters of Orakzai tribal district, he said being prime minister the only objective he had in mind was the nation’s uplift.

“For this I have changed the batting order in my team and made a couple of changes too. I will do it in the future as well. I want to tell all the ministers that any­one of no use for the country will be replaced with the one who is beneficial.”The prime minister said the chief ministers of Pun­jab and Khyber Pakhtun­khwa should also put their teams under the scanner. The rulers would be held accountable by Allah Almi­ghty for sufferings of the poor for not providing their children with education and medical treatment and for sudden increase in prices of medicines, he said.

Mr Khan said that he had spoken 15 years ago about the issues facing the people of tribal areas that were now being highlighted by the Pakhtun Tahaffuz Move­ment (PTM).

The premier said: “I have been speaking about innocent people dying and getting displaced [in tribal areas]. They [PTM] are saying the same thing, but the tenor of their arguments is in the interest of neither the tribal areas nor Pakistan.

“I spoke against the Pak­is­tan army going into the tribal areas at the be­hest of Americans beca­use the tribesmen are our army.”

Unfortunately, PM Khan added, the ruler at that time knew nothing about the tribal region, its people and traditions. “The people from other parts of the country have very little idea about what has happened in the tribal area… It is not the Pakistan Army to blame but the military ruler who sided with the US.”

As a consequence, Pakis­tani soldiers were martyred and the tribal people suffered a lot, he said and added: “Nobody knew about the pain of [the tribal people] moving their women to safe places [in an honour-bound society]. Only I knew. Not a single prime minister has ever been to the tribal areas and here I am again because only I know your pain.”The prime minister said the nation and the region must think ahead now — about educating and emp­loy­ing the tribal children and youth and improving conditions in the region.

“This is the real challenge before us. Just rubbing salt into the wounds without offering a solution [is a futile approach],” he said. “The solution is to put balm on the wounds, to help, provide compensation and support to those who have suffered.”

PM Khan said that registration of internally displaced persons had been completed and he had asked KP Cheif Minister Mah­mood Khan to draw up a plan to support all those who had suffered losses.

He said that Orakzai was a beautiful place and the Pakistan Tehreek-i-Insaf gov­ernment was chalking out a tourism policy that would contribute to generation of employment for youth as well as income. He said the biggest challenge before the government was to generate jobs and the PTI’s Rozgar Scheme would provide interest-free loans to help the youth set up shops and businesses and acquire skills.

Imran Khan recalled that years ago he had visited upper and lower Orakzai, ind­eed the entire tribal reg­ion, to write a book about it.

Prominent among those who attended the rally were KP Governor Shah Farman and CM Mahmood Khan.

Earlier, Prime Minister Khan pledged to explore the possibility of setting up a branch of the Shaukat Khanum Memorial Cancer Hospital and Research Centre (SKMCH&RC) in Afghanistan to provide treatment to patients there.

He visited the SKMCH&RC in Peshawar, went around different sections of the hospital and enquired after the health of under-treatment patients.

Afghan patients told him about lack of healthcare facilities in their country and thanked him for free services at the Peshawar hospital.

A patient from Afghanistan’s Mazar-i-Sharif area told Mr Khan that the situation regarding cancer treatment in Afghanistan was deplorable as the patients had no facilities to undergo treatment there. Another Afghan patient said that most of cancer patients in Afghanistan could not afford to come to Pakistan and were destined to die without any treatment.

Imran Khan, who is the chairman of the Shaukat Khanum Memorial Trust, asked the government officials to look into the possibility of opening a branch of the SKMCH in Afghanistan.

He expressed satisfaction over diagnostic and treatment services being extended to the patients at the hospital.