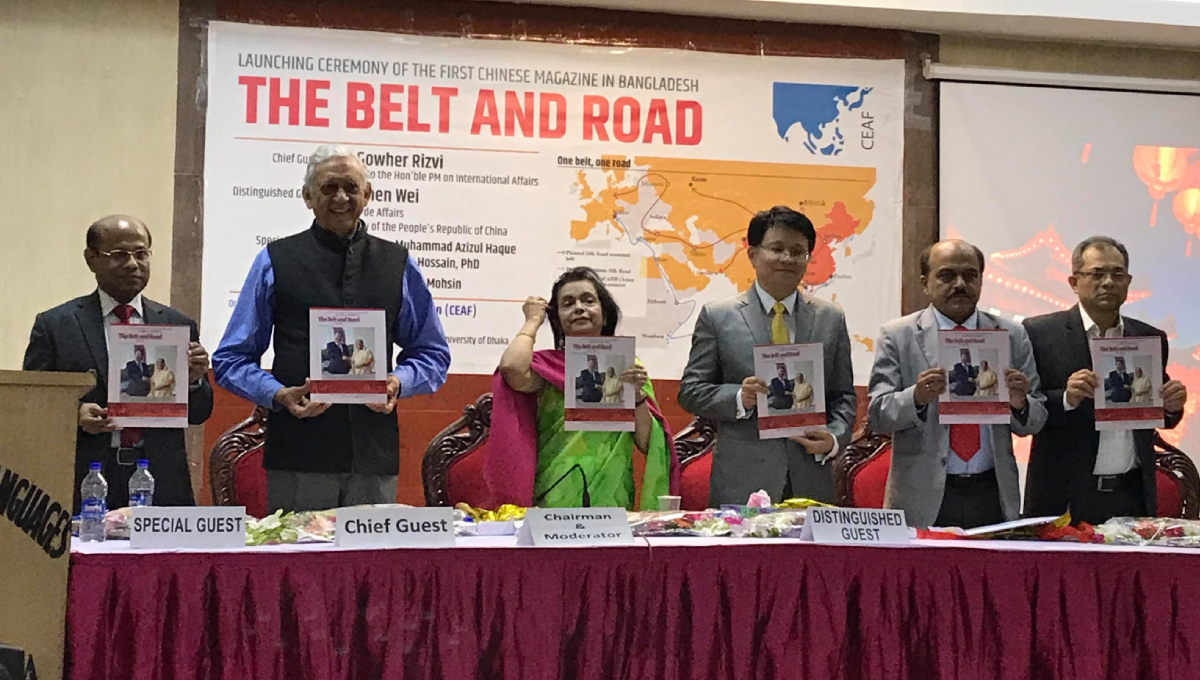 Prime Minister’s International Affairs Adviser Gowher Rizvi along with other guests at the launching ceremony of the first magazine in Bangladesh, “The Belt and Road” at the auditorium of Institute of Modern Languages at Dhaka University on Saturday, Apr 20, 2019. Photo: Courtesy

“Bangladesh is proud to be part of this initiative,” he said while addressing the launching ceremony of the first magazine in Bangladesh, “The Belt and Road” exclusively covering the highlights of the vision of “The Belt and Road Initiative” held at the auditorium of Institute of Modern Languages at Dhaka University.

Some 37 heads of state or government will attend the second Belt and Road Forum on International Cooperation to be held in Beijing from April 25-29.

In fact, Dr Gowher said, long before the BRI was announced they had their own BCIM (Bangladesh, China, India and Myanmar) Economic Corridor which is essentially a reduced version of the Belt and Road Initiative.

He said the creation of BRI along with other initiatives is an important opportunity for development of the region. “Bangladesh is extremely successful in managing its foreign relations,” he added.

Prof Li Tao, Executive Director of the Institute of South Asian Studies at Sichuan University in China, recently told UNB that Bangladesh holds an important ‘geopolitical strategic position’ in the BRI that offers ‘great potential’ to strengthen economic and trade cooperation between Bangladesh and China.

“We should strengthen cooperation between the two governments, and at the same time focus on strengthening inter-party exchanges,” she said.

During Xi’s historic visit to Dhaka in 2016, Bangladesh formally joined the ‘Belt and Road Initiative’, a drive which has already drawn the close attention of the world.

Along with the publication, a website dedicated to “The Belt and Road Initiative’ – bri-ceafbd.com – was also launched. The publication will have Bengali and English sections for wider audience.

Executive Director of the Foundation Nasim Mahmmud said the traditional friendship between China and Bangladesh by land across the Himalayas and along the silk routes date back to over 2000 years.

The BRI initiative aims to strengthen infrastructure, trade and investment links between China and more than 65 other countries.

The Centre for East Asia Foundation has decided to highlight and popularise the great vision of China, “The Belt and Road Initiative”, among policymakers and stakeholders as well as general populace of Bangladesh.

Sore knee? Maybe you have a fabella