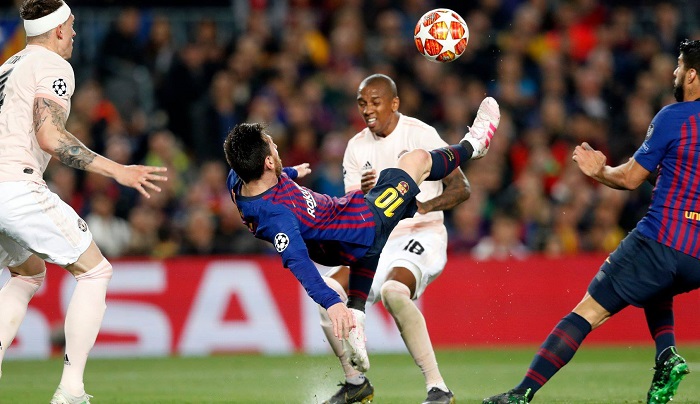 Two goals from Lionel Messi helped Barcelona to a 3-0 defeat of Manchester United on Wednesday morning (AEST) and a 4-0 aggregate triumph in their Champions League quarter-final tie.
With a 1-0 advantage from the first meeting at Old Trafford, the Catalans took command inside the first 20 minutes thanks to a double from their number 10, the second of which owed plenty to a dreadful mistake from David de Gea.

Ole Gunnar Solskjaer named an attacking line-up featuring Anthony Martial, Jesse Lingard and Marcus Rashford, but the blow of those first-half goals seemed to drain any hope of repeating the kind of performance they produced to stun Paris Saint-Germain in France in the last 16.The tie was firmly put to bed by a sublime goal from Philippe Coutinho, who may get the chance to face old club Liverpool in the semi-finals if they see off Porto on Thursday morning.

Rashford prodded a shot against the bar in a positive start from United, but they engineered their own downfall within the space of four minutes.

Ashley Young dithered in possession and lost the ball near his own box, allowing Messi to step into space and drill a shot beyond De Gea and into the bottom-left corner.-?

The United keeper could do little about it, but he endured a calamitous moment 20 minutes in, allowing Messi’s tame right-foot shot to squeeze beneath his body and into the net.

De Gea denied a certain Sergi Roberto goal after Messi left Phil Jones chasing shadows, but he was again helpless as Barca struck a third on the hour mark, Coutinho sending a stunning strike beyond his outstretched right hand.

Marc-Andre ter Stegen made a magnificent 90th-minute save from substitute Alexis Sanchez, but United were well beaten and must now fight to turn around their recent form after a fifth defeat in seven games in all competitions.What does it mean? Messi just warming up as United’s season falls apart

The optimism Solskjaer brought back to United appears to have run dry. They started positively but gifted Barca the tie with mistakes, making it eight years now without a semi-final appearance. A return to next year’s competition is no guarantee, either.

As for Barca, they might have looked short of their best at times across the two legs, but Messi looks like a man on a mission this season. With him in such form, a treble is very much on the cards.

Messi the master of ceremonies

The entire game seemed to dance to Messi’s tune. His second goal – his 45th of the season – might have been fortunate, but he deserves all the plaudits that come his way. He appears determined to get his hands on this trophy again.