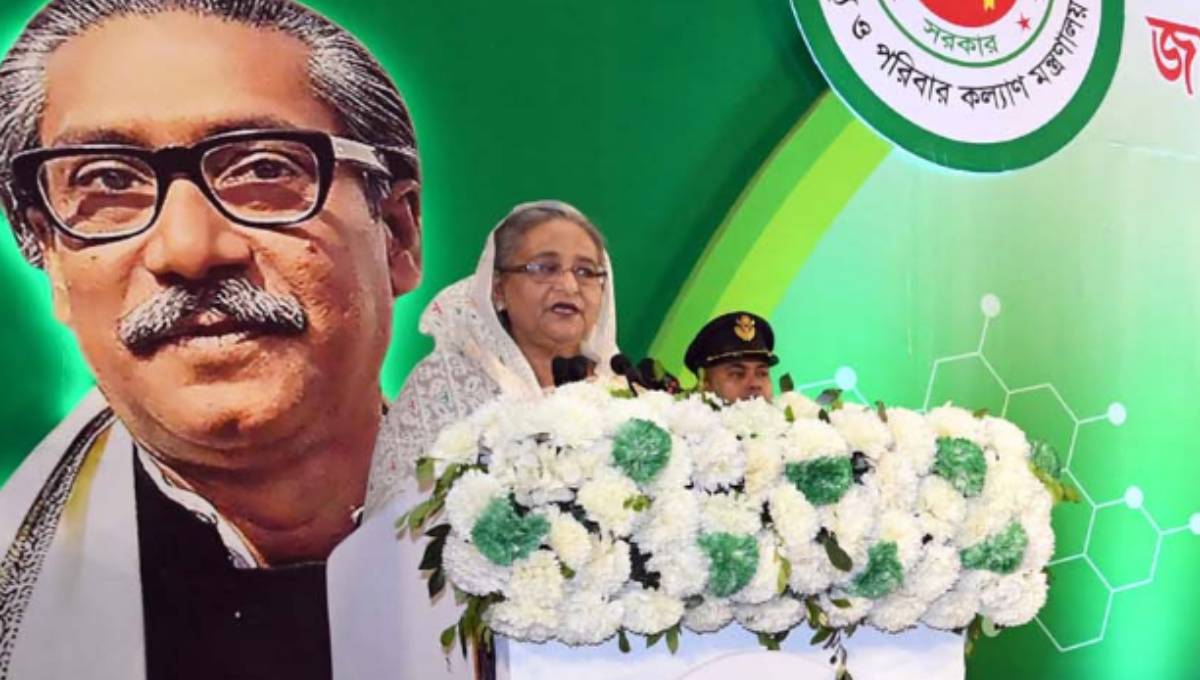 Photo: Prime Minister Sheikh Hasina addresses the inaugural function of National Health Service Week and National Nutrition Week and Distribution of Ambulance and Jeep procured with public fund during the 2017-2018 fiscal year at Bangabandhu International Conference Centre in the capital.

“It’s essential to conduct a larger campaign so that people take nutritious foods and balanced diet. We’ll have to give a special importance to preventive measures so that they aren’t affected by diseases,” she said.

The Prime Minister said this while addressing the inaugural function of National Health Service Week and National Nutrition Week and Distribution of Ambulance and Jeep procured with public fund during the 2017-2018 fiscal year at Bangabandhu International Conference Centre in the capital.

With the slogan ‘Shashtthya Sebar Odhikar, Sheikh Hasina-r Ongikar’ (To ensure right to health services is the commitment of Sheikh Hasina), the National Health Services Week is being observed for the first time in the country.

The Prime Minister said her government has focused on ensuring food security so that people take nutritious foods. “Today, Bangladesh is self-sufficient in food production,” she said.

Terming nursing a noble profession, the Prime Minister said her government emphasised the need for nursing education and introduced higher education over nursing in the country.

Hasina said she has already directed the authorities concerned to withdraw the condition of having science background for students to pursue nursing courses.

Noting that her government has upgraded the standard of nursing job and increased their salaries and allowances, the Prime Minister said now it is necessary to develop specialised nurses in the country.

The government has already taken measures to provide specialised training abroad for nurses. “We’ll also take measures to improve the standards of training of nurses in the country.”

Returning to power in 1996, Hasina said she curtailed or waived taxes from the medical machinery to promote the private sector in the health services.

Hasina said the government has taken measures to set up a medical university in each division in the country.

She said the BNP-Jamaat government had rolled back community clinic programmes introduced during the Awami League’s regime of 1996-2001.

Coming back to power 2009, the AL government resumed the community clinics to render primary healthcare services to local people. Some 30 types of medicines are provided from the clinics free of cost, Hasina said adding that the community clinics are greatly contributing to maternity and child health in the country.

She said her government has relentlessly been working to improve the public health keeping in mind that the health is wealth.

A video documentary was screened focusing on the country’s health services at the function.

The Prime Minister also handed over the keys of 10 ambulances and the jeeps to the officials concerned as token distribution of such vehicles to different hospitals and health complexes.